TVLine has an exclusive first look at the Saved by the Bell revival, which features new protagonist Daisy (played by Haskiri Velazquez) making use of Zack Morris’ legendary brick phone. That’s one of the many Easter eggs fans of the original NBC comedy will find in the Peacock sequel series, which follows a new generation at Bayside while also catching up with the Class of ’93.

“As a viewer, if I was tuning into a Saved by the Bell [revival], I’d be pretty bummed not to see any of the original cast, not get to know what’s going on with all of them now, and not see little inside jokes and Easter eggs,” showrunner Tracey Wigfield tells TVLine. “That being said, it really was a balance we in the writers room had to walk to make sure that we were spending enough time with this new cast and really investing in them, and we were creating a show that could really stand on its own if you had never seen the original Saved by the Bell. This could still be a comedy that anyone would want to watch. That was very important, and then we thought of the OG cast and the nostalgia as kind of the icing on top.”

In the new SBTB, California governor Zack Morris (Mark-Paul Gosselaar) gets into hot water for closing too many low-income high schools, then proposes that they send the affected students to the most well-funded schools in the state — including Bayside High. The influx of new students gives the privileged Bayside kids — including Zack and Kelly’s son Mac (Roswell, New Mexico‘s Mitchell Hoog) and Jessie’s son Jamie (Empire‘s Belmont Cameli) — a much-needed dose of reality. Elizabeth Berkley Lauren and Mario Lopez are series regulars; Gosselaar, Tiffani Thiessen and Lark Voorhies guest-star.

Saved by the Bell premieres Wednesday, Nov. 25, with all 10 episodes being released at once. (While the first episode will be available on Peacock’s free tier, the rest will be available only to Premium tier subscribers.) Scroll down for an additional first look at the new poster, which shows Slater, Jessie and the new class in the iconic Bayside hallway, then hit the comments with your hopes for the revival. 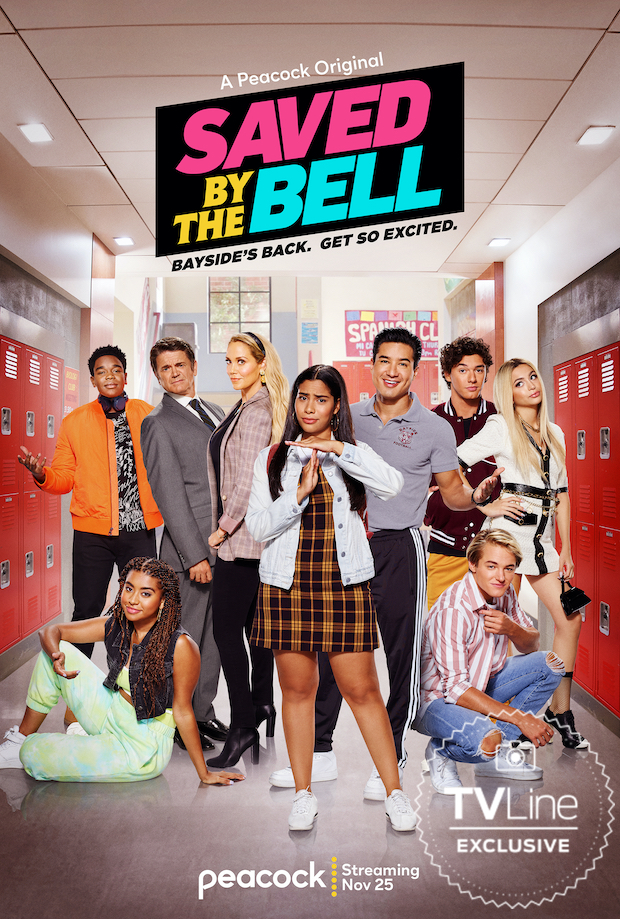