When Elizabeth Berkley Lauren signed on for Peacock’s Saved by the Bell revival, it was important to her that Jessie Spano not be defined solely by that one, iconic scene. (You know the one.)

“It was something that I was really passionate about and protective of,” Berkley Lauren tells TVLine. “I was invested in who she became as a woman.”

While the show’s continuation contains no shortage of references to Jessie’s caffeine-pill bender, the character is not defined by her former demons. In the new series, the Bayside alumna (and former Hot Sundae member) has returned to the Pacific Palisades-based high school as a guidance counselor, having already attained much success in her professional life.

“I really needed to know what she accomplished,” Berkley Lauren explains. “[Jessie] was so ahead of her time, and had such a singular vision for herself… [Executive producer] Tracey Wigfield and I wanted to make sure we knew what actually manifested [between the original series finale and now]. She got her PhD, she’s a New York Times best-selling author of parenting books, she gave TED Talks and was involved in politics — and, of course, met someone, married him and had a child.” 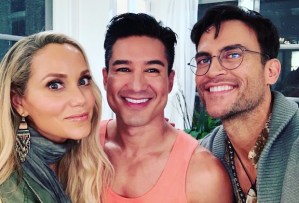 Viewers eventually will meet Jessie’s husband Renee (played by American Horror Story‘s Cheyenne Jackson), a fellow writer who is off on something of a spiritual journey for much of the revival’s first season. Early episodes indicate that the couple has drifted apart over time.

“Her personal life is a bit of a mess,” Berkley Lauren says with a laugh. “You know that at one point in life, [Jessie and Renee] connected and probably shared the same passions, which is what brought them together. They’re progressive, they’re intelligent, but something happened. Now they’re at a point in their relationship that is taking them in different directions, and I think that Jessie is realizing that she… might not know how to fix this anymore.”

With Renee mostly absent, Jessie is basically a single mother to teenage son Jamie (played by Empire‘s Belmont Cameli), which plays into her parenting style. “She’s overprotective as a mother,” Berkley Lauren previews. “She wants to be involved in her son’s life and help usher in this generation… [and] all of that really resonated with me. Jessie, for the most part, will deliver what people had hoped she’d become.”

Saved by the Bell premieres Wednesday, Nov. 25, with all 10 episodes released at once. Drop a comment with your hopes for the revival below.