CBS has released teasers for the nine returning shows that now have November season premiere dates.

That includes the network’s No. 2 comedy, Mom, which will enter Season 8 without original co-lead Anna Faris. (At the time it was announced that Faris had exited the series to pursue other opportunities, it was made clear that the role of Christy will not be recast. Rather, her absence will be addressed in a Season 8 storyline.)

Does Mom‘s premiere synopsis hint at Christy’s fate? Read on and find out!

ALL RISE (Monday, Nov. 16)
Lola and Mark try to rebuild their friendship after Mark witnessed Lola being detained during a protest while defending a teen girl, amid an escalating encounter with police. Through a series of flashbacks, details emerge surrounding the night of the protest as well as the long-lasting effects they have on Lola, Mark, Emily, Luke and everyone else involved. Also, to help with the court backlog due to closures caused by COVID-19, Lola hires Ness Johnson (Glee‘s Samantha Marie Ware), a bright, outspoken legal clerk who immediately clashes with Sherri.

BOB HEARTS ABISHOLA (Monday, Nov. 16)
Bob enlists Tunde’s help to buy an engagement ring, but his plans to propose to Abishola are upended by her belief that a traditional marriage is more trouble than it’s worth.

NCIS (Tuesday, Nov. 17)
In the launch of a brief arc that will be set midway through the previous season (get details), Gibbs and Fornell attempt to track down the leader of a drug ring who supplied drugs to Fornell’s daughter. Also, the team deals with the case of a missing cadaver from the NCIS autopsy room.

NCIS: LOS ANGELES (Sunday, Nov. 8)
When a Russian bomber goes missing while flying over U.S. soil, Callen and Sam must track it down in the desert and secure its weapons and intel before the Russians on board destroy the plane. Also, Hetty gives Nell a cryptic assignment…. 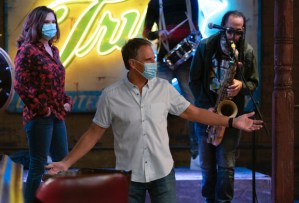 NCIS: NEW ORLEANS (Sunday, Nov. 8)
As New Orleans grapples with the effects of COVID-19, Pride sends Tammy and Carter to investigate a suspicious death aboard a humanitarian ship offshore, where they learn that some crew members are infected with the deadly disease. Also, Wade is overwhelmed by the high volume in the morgue due to COVID-19 (read preview).

THE NEIGHBORHOOD (Monday, Nov. 16)
In “Welcome to the Movement”,  the Butlers and Johnsons unite when a member of their community is the victim of racial injustice. (Get scoop.)

S.W.A.T. (Wednesday, Nov. 11; two-hour premiere)
Hondo, his father Daniel Sr. and his teen charge Darryl confront the history of racial tension in Los Angeles between law enforcement and the Black community, through flashbacks to the city in 1992 following the Rodney King verdict (get casting scoop). Also, the SWAT team pursues El Diablo’s scattered drug cartel hiding in the city and a Jihadist group detonating bombs in coordinated attacks. In the second hour, he SWAT team acts as a domestic surveillance unit for the CIA to confirm whether an international crime lord has resurfaced in Los Angeles after being off-grid for years. Also, Tan’s mother is a victim of racial discrimination, and Hondo encounters his ex-girlfriend Nichelle for the first time since their breakup.

YOUNG SHELDON (Thursday, Nov. 5)
After graduating high school, Sheldon has a breakdown when he realizes he may not be ready for college. Also, Dale tries to make amends with Meemaw.