The upcoming Fall TV season lies is most unusual — but that doesn’t make it much less busy! So although several pandemic-delayed favorites (including NCIS and The Conners) don’t yet have exact return dates, it is still a good time to unfurl, with a flourish, TVLine’s famously handy calendar (and it is a calendar) of September premieres.

To paraphrase SNL‘s Stefan, this fall has everything. Prestige series (FX’s Chris Rock-led Fargo Season 4, Netflix’s Ratched). Sci-fi spectacles (HBO Max’s Raised by Wolves). Canadian shows making their U.S. debut, and streaming series that got snatched up by broadcast networks to plug programming holes. You have a Filthy Rich Kim Cattrall, and Jane Lynch deeming people to be the Weakest Link.

But fear not! Familiar fare is also on tap for the fall, led by the return of American Ninja Warrior (which safely taped Season 12 in a “bubble”). It will soon also be time to go Dancing With the Stars (now hosted by Tyra Banks), Fox animation will resume its Sunday “domination” in late September, and TV’s No. 1 drama, This Is Us, will be back with a two-hour opener… in November.

Here is our calendar of September dates (including The 100‘s series ender and a few other finales), as well as a tinted box that highlights a hand-curated list of October and November’s big premieres.

New series are in BOLD, time zones are Eastern. Click to zoom and save the dates! (Updated 9/18) 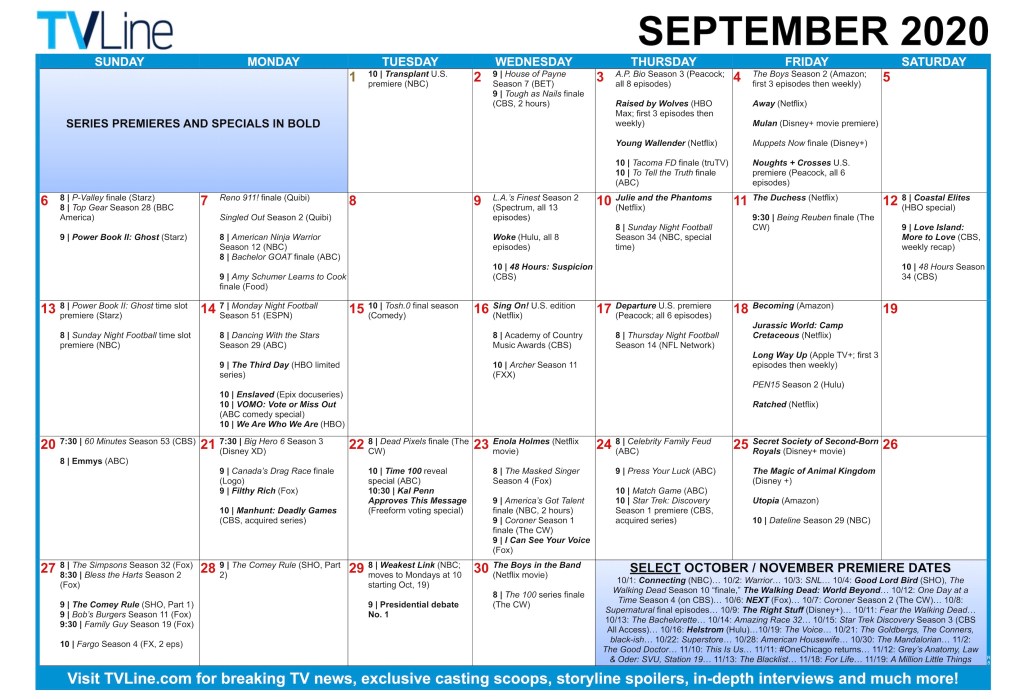 Preemptive P.S. My calendar-making skills have never been infallible, so if you spot something that is (theoretically) missing, drop a (polite) note in Comments and I will (possibly) include it in an update!

You can also view the broadcast networks’ fall (or “fall”) roll-out plans in detail at these links: ABC, CBS, Fox, NBC and The CW.