Kylie Bunbury has tasted pure happiness, and it tastes sweet.

No, seriously. For her role in Peacock’s adaptation of Brave New World, which premieres Wednesday on the streaming service’s launch day, Bunbury frequently had to ingest prop pills known in the show as “Soma” — a drug dispensed freely in the futuristic society depicted in the series. Soma’s main function: keep the populace’s serotonin levels high, thereby making feelings of anger, hurt, grief and despair flit away like butterflies on the breeze. Or, as the show’s tagline somewhat menacingly suggests: “Everybody happy now.”

Anyway, back to the Soma. On set, the vibrant dots made to represent the drug were colored sugar. “They use them on cakes,” Bunbury says. “It’s just a little sugar drop that they made in different colors.” She laughs. “And I like some sugar, so I was fine with it. I was fine crunching on them, swallowing them.”

Brave New World is loosely based on Aldous Huxley’s 1932 science-fiction novel about a world-state in which people are artificially engineered (think fake wombs) and classified in social castes; when a man not raised within the seemingly utopian society winds up entering it, the contrast highlights what a dystopia the new world order truly is. (Watch a trailer here.) Peacock’s adaptation stars Alden Ehrenreich (Solo: A Star Wars Story) as John, the man who grew up a “savage” — aka outside the “enlightened” society of New London. Jessica Brown Findlay (Downton Abbey) plays Lenina, whose world is rocked when she takes her first trip outside of New London.

Bunbury plays Lenina’s best friend and co-worker Frannie, who “believes in the social conditioning, and she’s okay with it,” Bunbury says. “She actually doesn’t really want to step outside of it. To her, uniformity is bliss, because social stability is everything. So she doesn’t want to go on this journey of self-discovery, and when she sees her best friend wanting to, it threatens everything that she knows.”

Bunbury’s next major gig is the David E. Kelley drama Big Sky, an ABC drama currently on hold due to the COVID-19 shutdown. And she, of course, played female baseball phenom Ginny Baker in Fox’s much-missed Pitch. We talked about all of that — including whether that Hulu promo was a sign of things to come — during a recent chat.

TVLINE | Brave New World is loosely based on the Huxley book. Are you the kind of person who wants to read the source material prior to reading scripts for a project like this?
If it’s a well-known source, I typically do read the book that it comes from or wherever it originated from. However, with this, I did know that it was going to be quite a departure from the book, especially in terms of my character, so I just kind of did the SparkNotes thing. I hate admitting that, but I wanted to go into it with a fresher sense. I understood the basics of what the book, what Aldous Huxley wrote, and so I just wanted to go into it fresh and kind of create Frannie in my own way.

TVLINE | In my notes for the beginning of the season, I wrote “Frannie is a booty cheerleader for Lenina.” She’s very into New London’s no-monogamy rule. But what can you tease about her trajectory as the episodes continue?
[Laughs] Her personality is very big and she’s mischievous. She loves disturbances, she loves attention, and she loves the world that she lives in. What you really see is that she’s hiding behind those things because of fear. So for me, I thought that was a really interesting character for me to play, because I’ve never really played anything like that — such a character that’s basically deeply unconscious and wants to stay that way. In life, I feel like we encounter a lot of people who would rather stay unconscious and not wake up to the truth of themselves or the truth of the world.

TVLINE | In fictional works, those characters often have the rudest awakenings. Does Frannie have a moment like that?
Frannie definitely cracks, but it’s not because… She cracks with resistance still, if that makes any sense.

TVLINE | Let’s go to something completely silly: Your costumes in the pilot alone are so out-there!
Aren’t they awesome? Oh my gosh, that was my favorite part, to see what Frannie was going to wear. Oh my goodness. 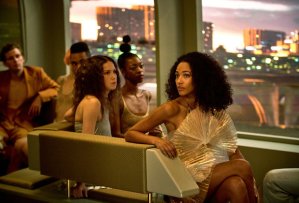 TVLINE | What were you like when the costume designer was like, “OK, here’s the see-through catsuit you’re going to wear for 10 seconds.” Were you all-in?
I was all-in. I wanted to see Frannie in the extreme. Obviously, when they said, ‘Oh, you’re going to wear a cat outfit,’ I was thinking it was going to be more of a cat outfit. But it’s New London and it’s all about sex, so it’s got to be a sexy cat, of course. [Laughs] But no. I embraced it. Susie [Coulthard], our costume designer, is an absolute genius, and I trusted her right from the jump. She created that whole world where none of the outfits seemed familiar, and I think that’s a very difficult thing to do. She executed the future of New London, the future aspect so well.

TVLINE | Can we talk about Pitch for a minute, and that Hulu tease that made me ache: Are you kidding me?!
Oh my gosh, I know. Oh, man. [Laughs] It was so funny. For that tease, I’m in my backyard and putting on the hat, putting on the jersey again, and throwing the ball. I mean, it definitely sent a lot of energy through my body. I miss that show. Honestly, nothing has really felt the same. There was something so special. Me and M-P [Gosselaar] always say it was like lightning in a bottle, from what the story was about to the cast, the crew, everything. We really believed in it, and we all really wish… I mean, we still text each other talking — the whole cast does — talking about how we wish we could come back and do it again, because we all just feel that there was so much story to be told and so much to explore. I just think it was just a little bit before its time. Just a tiny bit. 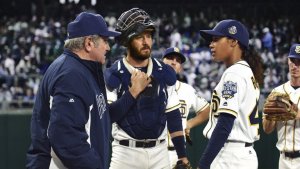 TVLINE | I know there was at least one time when it looked like maybe the show was going to get going again, but then that fell apart. What was running through your head when that was happening?
You know, over the years, since it’s been canceled, there have been a lot of talks about it. And I didn’t want to get myself too attached to it, so I kind of just placed it on my heart as one of those things that if it’s meant to be it’ll be. But yeah. There has been some whiplash. Some emotional whiplash, certainly, regarding Pitch, and then especially doing the teaser and then everyone’s like, “OK, does that mean there’s going to be a second season, or what’s going on?” But I will forever be open to stepping into Ginny’s shoes again.

TVLINE | Your Big Sky casting came about just around the time of the shutdown — I assume you haven’t shot anything yet?
We haven’t shot anything. We were in the middle of prep, costume, and all of that, and then we got shut down. But it does seem like we are starting back up again, and I could not be more thrilled to be a part of something like this. I mean, David E. Kelley is absolutely incredible, and this show itself, it’s such a slice of life. It’s this small town, and it’s sort of how I grew up in Minnesota, in the sense of being one of the very few ethnic girls in a very suburban town. So I’m excited to explore that. And [my character is] ex-rodeo, so they’ve got to get me on a horse.

TVLINE | That was my next question: Are you a horse girl?
I love horses. We actually live a few doors down from some horses. I’m not an avid rider by any means, but I love physicality, especially in my choices for acting, so I think it’d be really cool to be able to see Cassie — that’s my character — on a horse in some way. I just think it’d be really cool to see a Black cowgirl.

TVLINE | I love that you felt like you had to say “I love physicality.” We watched you train to be a major league pitcher!
[Laughs] Breaking! Breaking! [Laughs]