So close and yet so far! Though we don’t know yet when The Walking Dead will be able to air its actual Season 10 finale — post-production couldn’t be completed before the coronavirus pandemic sent everybody home — we do now know that the episode will include the return of Lauren Cohan as Maggie.

In a trailer dropped Sunday following the broadcast of the series’ penultimate Season 10 episode, Gabriel explained to a little girl frightened by the arrival of Beta’s horde that the fingers of his hand formed a mighty fist. One finger represented the warriors from Alexandria, others the fighters from Hilltop, Oceanside, the Kingdom… And his thumb? 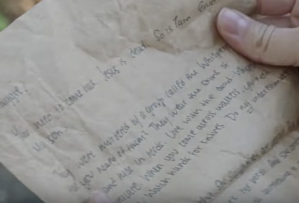 That, Gabriel explained, stood for “the others… the ones that aren’t here, those that might find us help.” Or, it turned out, those who might be help. Among them are Kevin Carroll’s Virgil, who we see arriving at Oceanside, apparently having decided not to remain alone on his island tending to the graves of his ill-fated family… and Maggie, who reads a letter imploring her to come home in the wake of the Whisperers’ murders of Jesus, Tara and Enid.

Deadheads will recall that Cohan made her last appearance as Maggie midway through Season 9, when the character took off with baby Hershel to help build new communities with the enigmatic Georgie. After the cancellation of the actress’ one-and-done ABC spy yarn Whiskey Cavalier, her full-time return to the AMC drama for Season 11 was announced at the show’s New York Comic-Con panel what seems like a lifetime ago in October 2019.

To check out the teaser, press PLAY on the video above. Then hit the comments. Are you looking forward to having Maggie back in action?