Warning: The following contains spoilers for Sunday’s pivotal episode of The Walking Dead. If you’d rather watch first, read later, make like Alpha’s head and be off!

For a while there, it looked like Sunday’s The Walking Dead was going to be a bad trip for Michonne in more ways than one. But then she found evidence that Rick might be alive, and suddenly, the unhappy ending of her journey with Virgil turned out to be the beginning of a whole new adventure for her. Read on, and we’ll review all the head-snapping twists of Danai Gurira’s final episode. 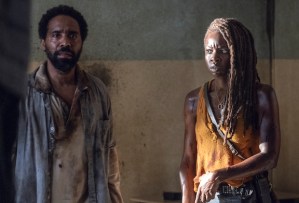 ‘I NEED YOU TO HOLD UP YOUR END OF THE BARGAIN’ | As “What We Become” got underway, we flashed all the way back to the end of Season 2, when Michonne saved Andrea from walkers… only this time, she didn’t save Andrea. She just walked away with the jawless walkers whose scent she used to remain invisible to the undead. (WTF No. 1 of several!) In the present, no sooner had Michonne and Virgil arrived on his island than he was waving red flags right and left, dillydallying, warning her against going into the lab (it’s, uh, “not clear,” he said, echoing Morgan’s Season 3 madness) and picking flowers from his wife’s herb garden — he’d promised to bring her some every day, doncha know? Finally, Michonne demanded at katana-point that he cut the BS, and he revealed the graves in which he hoped to bury his already-dead (but not, you know, dead-dead) family. “Thats why I needed you to come,” he said. He wasn’t good at putting down walkers, especially not those who were loved ones, and wanted her to do it. 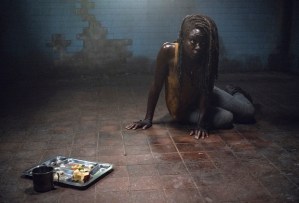 After Michonne did as she was asked, wasting precious time and nearly getting killed in the process, Virgil still wouldn’t show her where the munitions were. In fact, he convinced her to stay overnight rather than risk trying to sail away at low tide. Later, unable to sleep, Michonne snuck into the lab to see if she could find the weapons she’d come for. Instead, she heard voices. “Everyone be quiet,” said one. As Michonne tried to figure out where the voices where coming from, Virgil happened upon the scene and locked her in a room. “Why couldn’t you just wait till morning?” he whined. “I trusted you, and you ruined it.” (WTF No. 2… did Virgil ever tell the truth?!?) In the morning, she found her katana gone and a plate of food at her side. “Calm down,” said a voice. Turned out, there were three people locked in the room next door — two of Virgil’s fellow researchers and their assistant. They explained that, before he’d snapped, their group had always taken in stragglers. But when a fight had broken out over rations and a newbie had been killed, Virgil had panicked and locked everyone in… unaware that (d’oh!) his wife and kids had been in there, too. 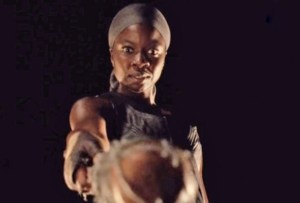 ‘WE REAP WHAT WE SOW, A–HOLE’ | When Virgil later stopped by the room in which he’d trapped Michonne, he insisted, “The island has a gift. It can help you the way it helped me.” And just like that, the floor started changing color, and the hooded Michonne of the past was in the room with the Michonne of the present. (In short, it was one big ball of WTF.) After Virgil confessed that he’d laced her food with a hallucinogenic herb from his wife’s garden, Michonne was reunited with Siddiq — but not in a heavenly hugging kinda way. “You were supposed to protect us,” he cried. “You let me die, and Rick, and Carl… “ Next, the Michonne of old pulled the Michonne of now back into Andrea’s timeline. After Michonne took what she wanted from a mutilated Andrea’s belongings, she was passed by while hitchhiking by an indifferent Daryl. As a result, she was recruited by Negan and the Saviors (!!!). In this alternate reality, she was Negan’s right-hand woman and the person who wielded Lucille in Season 6’s finale/Season 7’s premiere to strike out… yet another Michonne. (Just say no to drugs, kids.) During a subsequent skirmish with Rick & Co., Michonne was hit in the chest by one of Daryl’s arrows, and then — oh, man! — Rick shot her in the head. (Was it just me, or did this whole trip very much remind you of The Leftovers, right down to the classical score?) 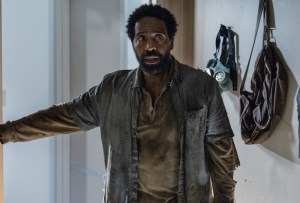 Back in reality, Michonne upchucked in a bucket that Virgil had made the mistake of providing her with; that put him in the room with her, thus making him vulnerable to a sneak attack with a fork. Before you could say, “Gotcha!” he was fleeing, and she had freed his other captives. But when they got to the beach, they discovered that he’d set the freaking boat on fire! (This guy… seriously.) With nowhere to go, the quartet hunted down Virgil, who sniveled that his wife had always told him the right thing to do, then she was gone. He’d wanted to let his friends go, he just, um, wanted Michonne to help him do it. In the end, though all four of Virgil’s victims had plenty of reasons to want to kill him, Michonne reeled herself back in and, paraphrasing Rick, said that they’d lose more of themselves if they did away with their captor. “It doesn’t settle it,” she argued. “But your mercy gives you something: peace.” The following day, before setting off to look for the munitions that Virgil imagined had to be around, because he’d found shells, Michonne picked up her katana from the storage closet in which he’d stashed it… the same storage closet that contained Rick’s boots! (Whaaa… ?) “Where the hell did you get these?” she demanded. So he showed her a boat that had rolled in with a storm. Aboard it was a phone into which was carved (onto which was drawn?) Rick’s name and a picture of Michonne and Judith, who looked just like she did now, even though she had been much younger when Rick “died.” After Michonne angrily questioned Virgil — had he known who she was when he came to Oceanside? What had he done with Rick? — she came to accept that he was as clueless as he purported. But “maybe it wasn’t an accident that we met,” he suggested. Anyway, if the others would help, he could get the boat going again. Then, if Rick really had been on the boat, “maybe you can find him again.”

‘SOMETIMES THE MOST INJURED ARE THE MOST FORGIVING’ | Soon enough, the boat was shipshape. Virgil’s former peers/captives were willing to take him with them, but he opted to stay behind and leave flowers on his wife’s grave every day. Which was sweet and all but super impractical. Once the vessel had set sail, Michonne managed to reach Judith and RJ on the walkie-talkie. Wise beyond her years, Lil’ Ass-Kicker told her mom not to worry about the Whisperers. “We got ‘em,” she said. “Alpha can’t hurt us anymore.” When Judith learned that her father might be alive, she insisted that Michonne go after him. “We’re OK,” the little girl swore. “What if he needs you more? What if he’s trying to come home, too, but no one will help?” So Michonne agreed to try to find him. She’d head north, attempting to reach Judith every day via walkie-talkie for as long as she could. Shortly, Michonne left behind the boatniks, slashed the jaws off a couple of walkers and began her search. Before long, she happened upon a couple wearing cowhide. The fellow was injured and inquired, “Can you help us? They’ll leave without us.” “They” turned out to be some kind of massive and well-organized caravan down the hill. Michonne had places to go, one person in particular to see, but remembering the way Rick had let her in at the prison, she dispatched her walker pets and told the duo, “Come on.” She was off to who knew where, the only thing certain being the individual she hoped to find when she got there.

So, what did you think of Danai Gurira’s trippy sendoff? (You can read her thoughts about it here.) Grade it below, then hit the comments with your reactions, quibbles, you name it.