Warning: The following contains spoilers for Sunday’s The Walking Dead. If you continue reading, you do so at your own peril.

Sunday’s episode of The Walking Dead marked the final one for Danai Gurira, a standout among the AMC drama’s leads since her debut in Season 3. But it may not be the last time she wields Michonne’s katana. Here, the actress/writer shares with TVLine her thoughts about possibly reprising her role on the big screen, her feelings about her character’s far-out sendoff and the souvenir that, at some point, c’mon, she needs to be given. 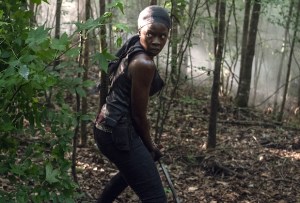 TVLINE | It’s been a while since you filmed Michonne’s exit. Now that you have some distance from it, how do you feel about it?
I feel good about it — and very thankful for the approach that we took, that trek through who Michonne could have been, had she made a different choice with Andrea at a time when she was so disconnected from her humanity. To be able to explore how she could have gone a whole other way, I thought, was a very generous approach to how I was about to leave the show. It was a very full-circle way to leave.

TVLINE | What was your reaction when you read the script?
[Showrunner Angela Kang and I] talked about it long before the script was written, so I knew about it. But it was very interesting. I had no idea what jimsonweed was. I’d never heard of it in my life. And I’ve always been a fan of Kevin Carroll’s, so I was very excited that he was cast [as Virgil]. We went to the same alma mater, so I’ve known him for a long time in a big-brother type of way, and I also really respect his work. 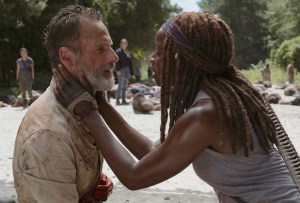 TVLINE | What was it like playing such a different Michonne opposite longtime castmates Norman Reedus and Jeffrey Dean Morgan?
It was a very trippy experience to get to work with both of them in a context that’s so different from [our usual one] on the show. Norman is very dear to me. JDM, too. So we had a very good time, even though [the material] was sometimes very disturbing. The twists with Norman were heartbreaking — we were enemies! That was really painful to do. But I really appreciate that the show always finds really unique and specific ways to allow characters to leave. We go through so many exits, yet they’re always very specific and true to the characters in their own way. So I was thankful that mine wasn’t an exception to that.

TVLINE | Since the episode leaves Michonne hot on Rick’s trail, where would you put the odds of her eventually finding him in one of the Walking Dead movies that are in the works?
We’ll have to touch base on that later. But wherever Michonne’s going, she’s determined to find him. That’s now her mission. It’s always been her hunch [that he’s alive], and she finally let it go, last season in the flashback. She and Daryl always had that hunch. Something didn’t make sense. But she had to put it away and take care of those who were around her. So to have that reawakened… the only way she could go [after Rick] was with Judith’s urging and permission. Whatever happens, she’s going to give it her all. But because of her evolution, she makes the same decision [that she had with Andrea,] to help people, to an extent expressing her humanity to the inconvenience of her own aspirations. That’s the woman that she’s become, and I was happy that that was the woman she got to exit being.

TVLINE | Speaking of the people Michonne helps… the caravan she led that couple to looked pretty interesting. Would you consider following Michonne’s journey in a movie of her own?
I’m totally not opposed to exploring Michonne’s story further. She’s a character that I’ve loved and that I think has a lot of interesting dimensions.

TVLINE | I’ve always heard that the going-away parties for departing cast members are epic. How was yours?
It was awesome. It was tricky, though. It was right around the Fourth of July, so nobody was working. So Norman and the amazing Darrell Pritchett, who is in charge of all of our outdoor special effects, they and a lot of the crew and Angela threw me this unexpected goodbye, complete with a very large fireworks display and 50 walkers crammed into my trailer. [Laughs] I was very loved out the door.

TVLINE | And I assume they let you keep Michonne’s katana as a lovely parting gift.
No, they didn’t, and I put that out there because I want that rectified! [Laughs]