Although Sunday’s episode of The Walking Dead was intended to be Season 10’s penultimate, it served as a fine stand-in for the finale that we’ll see down the road. Not only did “The Tower” strengthen two key relationships, it established a character who seems likely to be an insta-fave (she is mine, anyway) and left us with a classic cliffhanger. Read on, and we’ll go over all the details. 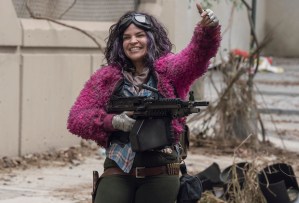 ‘QUEEN MAKES ME SOUND OLD AND PRETENTIOUS’ | The hour began where “Look at the Flowers” left off, with Ezekiel, Eugene and Yumiko making the acquaintance of a boisterous, purple-haired stranger. “Who are you? What do you want?” barked Yumiko, forgetting entirely that charm is a key component of a charm offensive. The newcomer, she explained, was one Juanita Sanchez, a ball of energy who called herself Princess. She’d been alone in the city, setting up ghastly “decorations” to make the place seem more alive, for over a year, and frankly, being so isolated for so long “totally sucks,” she said. (Feel ya there, kid.) Upon learning that the trio had to leave as quickly as they’d come, Princess offered to show them the speediest route through town. “I’m great,” she said. “You’ll see.” I believed her, but the others were, um, skeptical, especially after she opened fire on some walkers, in so doing scaring away the horses. Oopsie.

Given that, as Eugene put it, “our rendezvous window’s tighter than a tourniquet,” the threesome accepted, however reluctantly, Princess’ offer to lead them to a garage that was full to brimming with wheels. And, bless her heart, she did exactly that — but not before they made her lose track of where she was on her well-trod path through an actual minefield. “I have been afraid of many things,” admitted Ezekiel, “but this one’s new.” She also confessed that maybe she’d taken them on the scenic route because she hoped they’d decide to stay and be friends. She’d once been told that she was hard to love and hadn’t wanted that voice in her head to be right. “I have an all-too-familiar sense of how you feel,” said Eugene, recalling the way he’d lied in the past rather than risk being left alone. So, after they finally made it to the garage, though the “wheels” turned out to be bicycles, not cars, they invited Princess to come along. Even chilly Yumiko warmed to Princess (who, OK, would be a lot to be quarantined with but, under any other circumstance, would be utterly adorable). 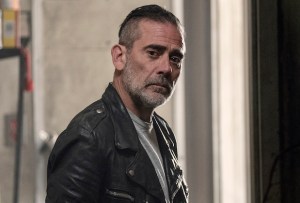 ‘YOU NEED TO SAY GOODBYE’ | Meanwhile, most of our cast was holed up in an abandoned hospital tower, where a lone cat kept the rats away (thus making him or her the second most important character on the show after Dog). Correctly sensing that Lydia was avoiding him as if she’d just seen him bludgeon Glenn to death, Negan approached her, apologized for what he’d had to do to her mother and suggested that she hit him, if only to work out some of her feelings. Though she was reluctant at first, all but pulling a “You’re not my mother, you can’t tell me what to do!” on him, she eventually swatted at him a bit and broke down in tears. Nearby, Kelly volunteered to accompany Carol to get extra wire for Luke, who was playing the role of Eugene and trying to rig up a communication system. Carol, of course, seized the opportunity to apologize for getting Kelly’s sister killed. But Kelly didn’t want or need an apology. She’d heard the old Carol stories, about “how you go off and do the thing that only you can do,” and encouraged the lone wolf not to “give up everything about yourself because bad things happen.” Which, if you ask me, wasn’t just big of her, it was enormous.

Out in the woods, Daryl was trying to reach Michonne via walkie-talkie, to no avail (we well know why), when he discovered Judith roaming on her own. And she wouldn’t be taken back to the tower, either; she was determined to learn the tricks of Daryl’s trade. So he gave her a crash course in tracking, during which he winged a Whisperer scout. After the woman revealed all that she knew, which wasn’t a whole lot, Daryl killed her and left her body in a ditch. “Maybe she has a family,” Judith protested. What if that had been Daryl? Or RJ? Or Michonne? Ultimately, Judith admitted what was really going on. She’d talked to her mom after the fire and learned that Michonne was helping some people she’d met. “I didn’t want to tell you… ’cause maybe you’d leave, too.” While Daryl wouldn’t lie and promise he’d never leave, he reassured Judith that “there’s a whole buncha people back there that’d do anything for you, and one day, when you’re older, they’re gonna need you to do anything for them.” Maybe even like five minutes older, it turned out…

‘THIS IS WRONG’ | Throughout the episode, Beta, his tenuous grasp on sanity now completely gone, led the Whisperers and their horde from the ghost town that Alexandria had become to the ghost town that Oceanside had become while Alden and Aaron spied on them and reported their location back to the tower. Only after Mr. B spotted a cat crossing their path did he veer from his course and point toward our heroes’ hideout. (How he could have guessed that this was their cat, I have no idea; his madness, his method.) So as the hour came to a close, the tower was being surrounded by a hungry, smelly, moaning nightmare. Not bad for a season finale that was never supposed to be a season finale, right? Grade “The Tower” in the poll below, then hit the comments with your reviews and your hopes for the finale-finale.