The Ranch is nearly at the end of its eight-part run before Nick’s killer is revealed.

In Episode 7, Beer Pong tells Colt that the murder weapon was found behind Nick’s trailer. Soon after, Wilkerson turns up at the Bennett house and arrests Luke for Nick’s murder. It was his gun they found on the premises.

Be that as it may, Luke didn’t kill Nick. Luke’s gun was in his car — the very car that Mary stole and cashed in for a quick drug fix. And we know it couldn’t have been Mary who ended the ex-con’s life; she was back at the Bennett house stealing a hot shower and some shuteye.

After Luke’s arrest, Colt, Abby, Beau, Maggie and Mary gather in the kitchen. Before long, Heather walks in and asks what happened. Mary breaks it to her daughter that Luke’s in custody, then Colt tells everyone that Luke is innocent. They have no reason to believe that Colt knows the truth — that is, until Abby nudges her hubby and says, “I think you should tell them.” Colt shrugs off the suggestion, then Beau loses his cool. He knows something’s up, and he’s not about to see his nephew rot in prison for a crime he didn’t commit. That’s when Heather interjects and confesses to murder. “I did it,” she says. “I killed Nick.” She then proceeds to tell Mary exactly what happened. 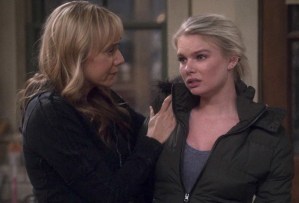 “That night, when I saw what he did to you, it brought back every time he hit you, or me, or Darlene… I’ve been scared of him my entire life,” she says. “I went back to the trailer to pack up your stuff so you’d never have to go back there again — and while I was packing, I found a gun. And then Nick walked in, and he saw the gun, and he came at me, and I didn’t know what to do. I just…” At this point, Mary takes Heather in her arms and squeezes her tight.

“You were protecting yourself,” Maggie says to Heather. “I just can’t believe you’ve had to go through this alone.” That’s when Colt interjects: “She wasn’t alone,” he says. “She called me right after. That’s why I was there and got arrested.”

The next day, Colt visits Luke and assures his cousin that he’s going to get him out of jail. He then returns home, where Heather, Mary and Abby join him for a sit-down with Jerry. The Bennett family attorney tells Heather that it sounds like she acted in self-defense, but the prosecution might not see it that way. But Heather is willing to take that chance; she’s going to turn herself in to get Luke out of jail, and she’s not going to tell the police that Colt helped her stash the murder weapon and flee the scene. Jerry explains to Colt and Abby that he’d be charged with accessory after the fact if he turns himself in, and he could face up to two years behind bars. They can choose to keep quiet, but if Colt gets caught, the prosecution will be a lot tougher on Colt and Heather. 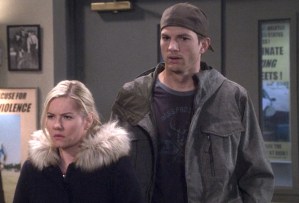 Colt eventually decides that he just can’t live with himself if he doesn’t come clean. The following day, he and Abby accompany Heather down to the police station. She tells Wilkerson that she needs to talk, but she’s too late. “Is this about your mom? Because we’re processing her right now,” he says. “Mary confessed to killing Nick.” (Wait, what?!)

What did you think of The Ranch‘s killer reveal? Did you have a hunch it was Heather who phoned Colt in the Part 8 premiere? Hit the comments with your reactions — and to discuss anything that’s gone down in the first seven episodes.