We can now rule out at least one potential gunslinger on Netflix’s The Ranch.

In the Part 7 finale, Nick entered his trailer, shut the door behind him and found an unexpected visitor. Viewers were then led to believe that the mystery intruder put a bullet between the ex-convict’s eyes.

Molly McCook, who has recurred on the Netflix comedy as Mary and Nick’s daughter Darlene, was last seen in Part 6. Since the character’s most recent appearance, her parents got back together, then Dad hooked Mom on heroin. In turn, Mary lost her home, which previously housed Darlene’s children.

TVLine revealed this turn of events to McCook, during an interview related to her current job: Season 8 of Fox’s Last Man Standing. “Oh my God!” she exclaimed. “Well, I’m floored.”

She then struck down the possibility that Darlene was the one to off Nick. “I haven’t been back since [Rooster’s] funeral,” she clarified. “I was at a Christmas party or a wrap party, and I think it was Ashton [Kutcher] who said, ‘We bring up Darlene all the time, and she’s working at a strip club in Florida.’ I was, like, ‘What?!’ 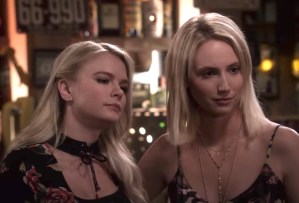 “I just find it hilarious that people are still talking about Darlene, and yet I had no idea [what the character] was up to,” McCook said with a laugh. “Clearly it could be anything!”

In a recent TVLine poll, 13 percent of readers said they believe that Mary was the one who shot Nick, whereas 12 and 11 percent of readers think it was Beau or Heather, respectively. And while a handful of write-in votes suggested that Darlene had resurfaced to take aim at her no-good dad, an overwhelming 55 percent of voters believe that the presumed-dead Rooster (played by fired former cast member Danny Masterson) is back to rescue Mary from Nick’s clutches — as illogical a twist as that would be.

Fans of The Ranch will get their answer when Part 8 — aka the final 10 episodes — drops on Friday, Jan. 24.