Remember when The Ranch was a lighthearted sitcom about a hometown hero who returns to face his past? Well now it’s a show where Sam Elliott commits straight-up murder.

To be fair, the Part 7 finale doesn’t actually reveal whether Elliott’s Beau Bennett kills Mary’s scumbag boyfriend Nick. And it’s not exactly a tonal shift for the show, which had morphed into a soap opera long before Rooster drove his motorcycle off a freaking cliff. If anything, it feels like a natural progression for The Ranch, which in this half-season sends multiple characters to jail and saddles Mary with a serious substance abuse issue. 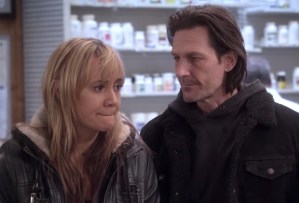 In the preceding episodes, Mary’s drug addiction leads her down a vicious cycle where she takes advantage of everyone who tries to help her. She uses the $1,000 that Luke gives to Heather to score more pills and gets her entire family evicted. When Luke and Heather refuse to pay her bail, she calls Nick (yes, that Nick!) to get her out of jail. Before long, she gets hooked on heroin, then steals Luke’s car and sells it for even more heroin. By Episode 10, Mary is stealing other people’s prescriptions to score drugs. And from the look on her face when she runs into Abby, she’s in some serious danger, and unable to escape Nick’s clutches.

Abby heads over to tell the Bennetts that Nick’s back in town. A seething Beau grabs his gun and heads out to confront the junkie, with Luke close behind. Last out of the house is Colt, who blames Nick for Rooster’s death. He tries to sneak out a second-story window, but Abby catches up to him.

“Don’t be stupid,” she says. “You lied to me, you blew up the dam, you just got out of jail! If you go over there right now, you can forget about us.” But when Colt asks for clarification on the whole “us” part, all Abby can muster up is an “I don’t know.” In response, Colt slams the car door and speeds off.

In the very last scene, Nick enters his mobile home. He shuts the door behind him and discovers an unexpected visitor. “The f–k you doing here?” he asks. Those are the only words said aloud before a shot is fired across the camper. Whether or not it struck and killed Nick, and whether or not it was the Bennett family patriarch who pulled the trigger, remains a mystery.

What did you think of The Ranch finale (and Part 7 overall)? And what are your hopes for Part 8 — aka the final 10 episodes — coming in 2020? Weigh in below.