The Ranch‘s Part 8 premiere confirms that Nick has been shot dead — but it doesn’t confirm who pulled the trigger.

Episode 1 picks up two hours before Nick suffers a fatal blow. Beau, Luke and Colt, all of whom are armed, head inside the ex-con’s trailer to find a badly beaten Mary and a bunch of drug paraphernalia. Colt and Beau decide to stay behind to wait for Nick, while Luke takes Mary back to the Bennett ranch to get her cleaned up. There, she is confronted by a distraught Heather, who is desperate for her mom to get her life together.

Later on, down at the trailer, Beau has a change of heart. “You know this isn’t going to bring Rooster back,” he says. “I hate this a—hole as much as you do, but we’ve both got more important things waiting for us at home” — namely Joanne, Abby and Peyton. “All I’ve been thinking about since we got here is how this thing plays out,” he continues. “Maybe Nick ends up in a grave. Maybe one of us does. Maybe we end up in jail. Best case scenario: We get away with it. But then we have to live with it for the rest of our lives.”

“So, what?” Colt answers. “This a—hole beats Mary, gets her hooked on heroin… he’s responsible for Rooster’s death. He just gets to keep living in our town? Running into my wife and kid at the pharmacy? F—k that. I ain’t gonna lose any sleep over this piece of s—t.”

Eventually, Colt digs through his pocket for another case of chewing tobacco and stumbles upon Peyton’s pacifier. It’s then that he decides that it’s not worth missing out on his daughter’s life to avenge Rooster’s death. He and Beau head out, but drive off in separate cars.

While he’s on his way home, Colt receives a mysterious phone call. After he hangs up, he turns his truck around and heads back toward the trailer park. The next time we see him, he steps out of Nick’s mobile home and surrenders to the cops. When Wilkerson asks if there’s anybody else inside, Colt answers, “Yeah, Nick. He’s dead.”

Down at the police station, Beer Pong heads into the interrogation room to speak to Colt. The rancher assures his friend that he’s innocent. He’s even got an alibi: On his way back to the trailer park, he stopped at a gas station for a candy bar, and security footage will prove that he was not present when Nick got shot. Lucky for him, the timestamp on the surveillance tape puts him at the gas station at the time that a neighbor called in to report a gunshot blast. 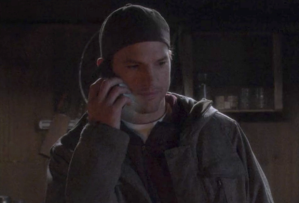 With his name cleared, Colt returns home and gets the one thing he’s always wanted: a hug from his father. “I thought I was gonna lose my other son,” Beau says. (D’aw!) Afterwards, Colt texts Abby to let her know that he’s OK. Once she arrives at the house, he apologizes to his estranged wife for not listening to her about going down to the trailer park, then she apologizes for not giving him the benefit of the doubt when she first learned that he’d been arrested for Nick’s murder.

In the very last scene, Colt is alone in the barn and makes a phone call. Somebody picks up, but we’re not made privy to who’s on the receiving end. “[The cops] don’t even know you called,” Colt says. “Don’t worry. Nobody knows it was you.”

So who is this “you,” and when are we going to find out who shot Nick? Grade the Part 8 premiere via the following poll, then discuss Episode 1  in the comments.