Now that they have wrapped their fall runs, TVLine is looking at how each network’s shows are stacking up thus far for the 2019-20 TV season — this time turning our attention to Fox.

Listed below is the average DEMO RATING for each Fox series — and this year we are comparing Live+7 numbers (that include the first week of DVR playback, since the networks, at least, do take that metric into consideration at renew/cancel time). Beside that is the percent CHANGE versus each program’s previous, full-season L+7 average (or its time slot predecessor’s performance, if designated as such in NOTES). Each program’s RANK represents what is perhaps the most critical measure — how it is faring compared to other shows on Fox, since come springtime heads must roll to make room for shiny-and-new pilots.

THE TVLINE BOTTOM LINE: Fox had some tough plays to call this fall, after ceding a second weeknight to sports. Prodigal Son (the No. 1 new drama), paired with 9-1-1 (buzzier-than-ever), has kept Monday pretty steady, while The Resident and the waning Empire have sliiightly improved on last season’s Tuesday twosome. Masked Singer, which is steamrolling right into a third season, continues to hit high notes, but boy oh boy did lead-out Almost Family blow its… opportunity. After a solid bow, SmackDown hasn’t held a candle to last fall’s Friday slate, but I am sure it somehow makes programming sense (dirt cheap? needs zero promotion?) to someone. 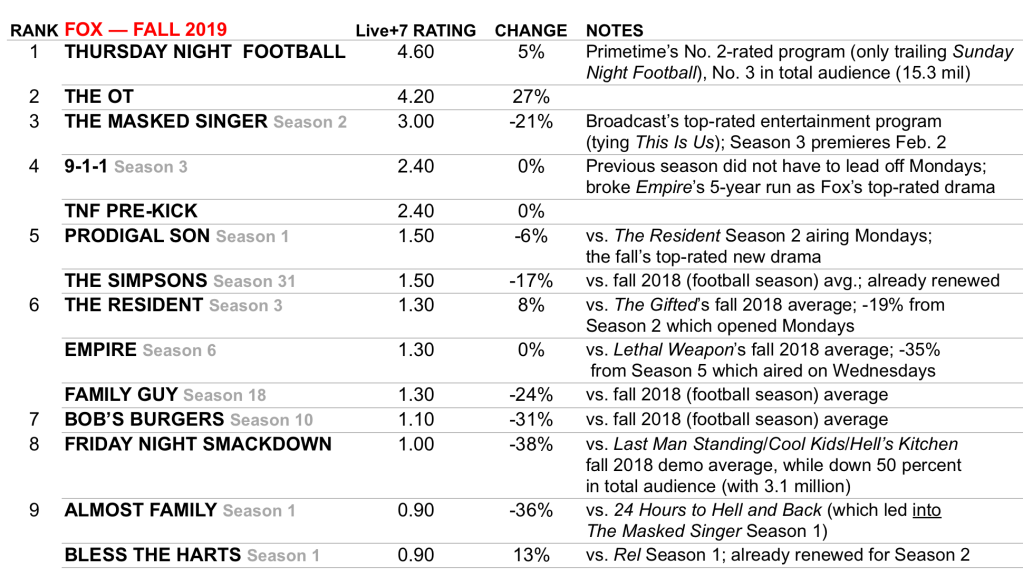 Which ranking or change most surprises you? (Review the midseason report cards for ABC, CBS and The CW.)