Now that they have completed their fall runs, let’s see how each network’s shows are stacking up thus far for the 2019-20 TV season, first turning our attention to ABC.

Listed below is the average DEMO RATING for each ABC series — and this year we are comparing Live+7 numbers (that include the first week of DVR playback, since the networks, at least, take that metric more and more into consideration when deciding a show’s fate). Besides that is the percent CHANGE versus each program’s previous, full-season L+7 average (or its time slot predecessor’s performance, if designated as such in NOTES). Each program’s RANK refers to perhaps the most critical measure — how it is faring compared to other shows on ABC, since come springtime heads must roll to make room for shiny-and-new pilots.

THE TVLINE BOTTOM LINE: Grey’s yet again continues to lead the ABC pack, and (tied with 9-1-1) trails only This Is Us among all network dramas. Soon to be seen, however, is how Thursday shakes out with Station 19 in the leadoff spot, and Grey’s and Million Things pushed back an hour. In L+7, Modern Family edges out The Conners as ABC’s top-rated comedy, but the latter draws a 43 percent larger audience. With four scheduling changes (Bless This Mess replaced Kids, mixed-ish and Emergence entered mix), Tuesday is down just 17 percent overall, while Friday is steady after subbing Housewife for Speechless. 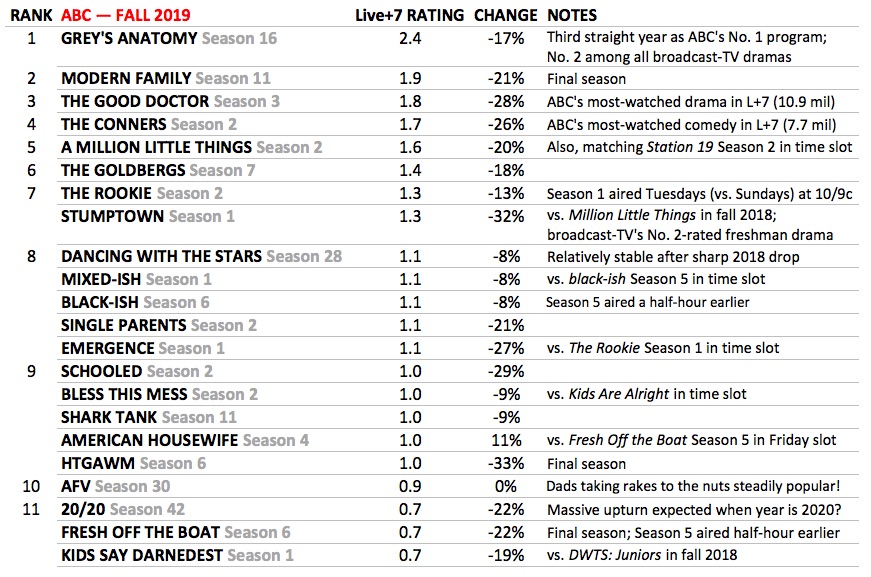