Now that they have wrapped their fall runs, TVLine is looking at how each network’s shows are stacking up thus far in the 2019-20 TV season — this time eyeing CBS.

Listed below is the average DEMO RATING for each CBS series — and this year we are comparing Live+7 numbers (that include the first week of DVR playback, since the networks, at least, do take that metric into consideration at renew/cancel time). Besides that is the percent CHANGE versus each program’s previous, full-season L+7 average (or its time slot predecessor’s performance, if designated as such in NOTES).

Each program’s RANK represents what is perhaps the most critical measure — how it is faring compared to other shows on CBS, since come springtime heads must roll to make room for shiny-and-new pilots.

THE TVLINE BOTTOM LINE: With Big Bang gone and Young Sheldon now a self-starter, Survivor — ugly as Season 39 was — led the CBS pack this fall, while edging out NBC’s The Voice to place second among all reality shows (behind Fox’s The Masked Singer). The Thursday line-up has drawn expected scrutiny (down 33 percent even without Big Bang factored in), but the rejiggered Monday is actually rating lower; All Rise for all its merits is a bit of a mid-evening crater, tying Fox’s Almost Family and NBC’s Bluff City Law as the fall’s lowest rated freshman drama. Tuesdays and Fridays stand as CBS’ steadiest nights, each down about just 11 percent from last season, though that will be tested by imminent changes (FBI: Most Wanted bumping NCIS: NOLA to Sundays, and MacGyver displacing Magnum P.I. for a stretch). 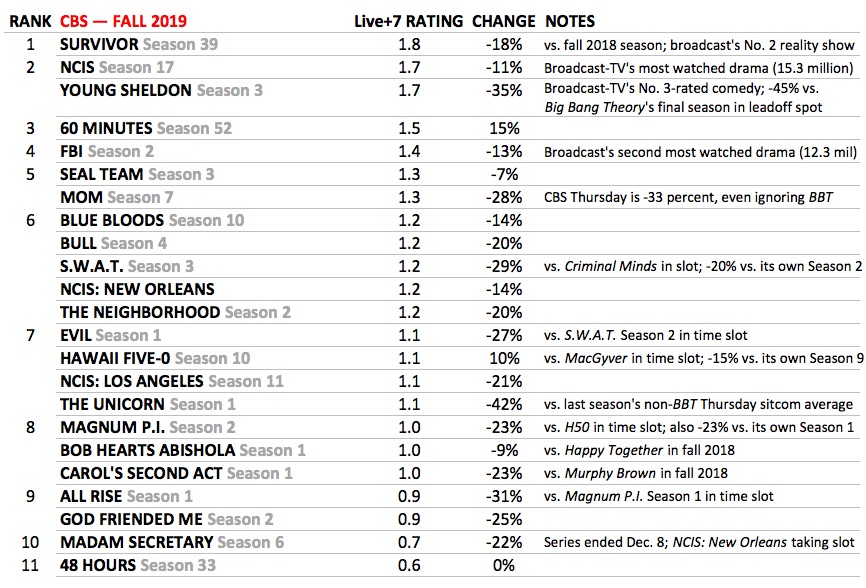