If timing is everything, Fear the Walking Dead’s poor Morgan had nothing in Sunday’s episode: No sooner did it appear that he was ready to admit that he liked Grace than her condition took a turn for not just the worse but the much-worse. Read on, and I’ll tell you all about it while taking into consideration recent reader feedback by attempting to sound less “unjustifiably self-impressed” and full of “smug cynicism.”

‘HOW MUCH TAPE YA GOT?’ | After “Today and Tomorrow” began with clips from Morgan’s interviews about Jenny and Duane, he balked at Al’s suggestion that they return to the convoy, even though they’d been dropping off boxes outside of radio range for a coupla days and by then were running low on gas. Before they could go anywhere, however, they ran into a nervous fellow named Tom, the equestrians hot on his trail. Though he was skeptical when Morgan insisted, “We can help you” — “That’s what they said,” Tom noted — he still consented to an Al interview once the coast was clear. During it, he explained that he’d been president of the HOA at the nearby Paradise Ridge condo complex. When the horsepersons arrived on the scene after things had gone south there, they’d blamed him — to the point that they’d tried to kill him. Now he was terrified for his sister Janice, who was still there. (Or so he thought. Likely, she was the young woman on the run that Wes saved in “Leave What You Don’t.”)

Don’t worry, said Al. She and Morgan would get Janice out. But she didn’t just want to rescue her for Tom’s sake. His references to the way the equestrians liked to say that it wasn’t about today but tomorrow made Al think of Isabelle and CRM. If Isabelle was in that condo complex, Al had to know. Later, Morgan guessed that there was more to Al’s determination than a desire to rescue Janice, but she wasn’t yet prepared to open up to him. That night, he challenged her again. “I have trusted you with a lot,” he pointed out. “You could do the same for me.” Turning the tables, she noted that he’d said a lot about the past, not about the present. Why was he avoiding the convoy? What was he running from? He wasn’t yet prepared to open up, either. So instead of talk, they snuck into the complex together. In no time, they spotted a tanker — their tanker — roll in. At that, Morgan panicked. If anything had happened to their friends, it was all his fault, he said. He had been avoiding something. 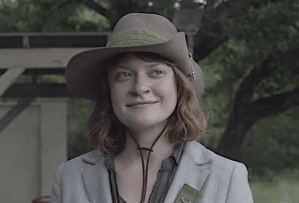 ‘YOU TWO SURE KNOW HOW TO MAKE AN ENTRANCE’ | While Al searched for Isabelle and taped everything from an inventory list to a map marked with keys (a la Georgie’s A Key to a Future?), Morgan entered the condo that presumably Tom had told him was Janice’s. Instead of her, though, Morgan found a (male) walker, whom he pushed out a window. Not long after, that same walker took Al by surprise, sending her splashing into the pool. After Morgan leapt in and saved her, they found themselves surrounded by Ginny & Co. In the morning, the horsewoman offered them jam and complimented them on their documentary. “It was a hoot,” she said. As for Janice, Ginny assumed that she had run off after Tom had. And Morgan and Al’s friends? They were all fine, Ginny said, “unless you considered Logan a friend.” In that case, “condolences.”

Once that was all settled, Ginny told Morgan and Al that she was doing what they were trying to. When Morgan noted that his group didn’t kill people, she retorted, “Spaghetti ain’t simple, and it’s usually messy one way or another.” (I know I’m in the minority, but I still love Ginny.) Did the equestrians have a helicopter? Al asked. “Honey, we just got a gas supply yesterday,” Ginny replied. So alas, no chopper and no tie to Isabelle for Al. When the conversation was concluded, Ginny sent Morgan and Al on their merry way. Al could even keep the footage she’d shot at the complex — Ginny wanted her to show it as often as she could; good promo. And she had a special parting gift for Morgan: her woodworker had fixed his stick. “This is the future, you just don’t see it yet,” she told him. He and Al should join her and her people. When the duo passed, she called after them,  “Go on, suck on a stone when you could be slurping soup!” 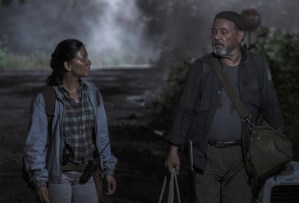 ‘NO RESPECT FOR VINYL’ | Meanwhile, Grace and Daniel bonded over Fanta flavors as they raided a strip mall for supplies. She was still thinking ahead, taking solar panels for the group’s future home. And so, in a way, was he, picking up some classic records — among them Chuck Berry and the Traveling Wilburys — to introduce the music to Charlie. But their jovial mood was shattered when they heard over the radio that their gang had lost the oil fields. Things went from bad to worse that night when their truck broke down from pulling too much weight. Grace blamed herself — she knew better than to try to take everything they’d found. Daniel wouldn’t hear of it, though. He used to be a realist, too. He was happier now, among friends, with her and Skidmark, whose “serious behavioral issues” sounded like recent stories about a Desperate Housewives cast member.

As the pair hoofed it to a nearby bar for shelter, Skidmark and LPs in tow, they were beset by walkers. No casualties, luckily… well, except for the albums. In the morning, Grace scrounged up a “Cinnabon-adjacent” breakfast for Daniel, and the two opened up to one another. He asked her to keep an eye on Charlie and Skidmark for him if things didn’t go the way he expected. In turn, she admitted that she was troubled by Morgan. “I thought I could help him.” But she had, Daniel insisted, recalling the sight of Morgan smiling till he’d run out of cheek around her. Spotting a guitar on stage, she suggested that maybe they could still let Charlie hear the Wilburys. With that, they launched into a lovely snippet of “The End of the Line” (which made me miss Galavant and Isabella all over again).

‘WE NEED TO TALK’ | En route back to the convoy with Tom, Morgan continued being interviewed by Al. As they talked, he got her to admit that the person she’d been looking for… “Yeah, I care about her.” But Al knew that what Ginny was up to was not the same as what CRM was. In turn, Morgan suggested that it wasn’t just Ginny & Co. who were holding onto the past — he’d been doing it, too. What’s more, he no longer needed to keep being interviewed. “I think I’m good,” he said. Having turned a corner, he immediately radioed Grace, only to learn from her that “what I was worried about… I think it’s happening.” She was ill — deathly, it seemed. Needless to say, he wanted to get to her ASAP. She wanted that, too. She hoped to get to see his smile again but feared she didn’t have much time left.

So, what did you think of “Today and Tomorrow”? Hit the comments.