The breezes blowing in Sunday’s episode of The Walking Dead carried on them more than the usual stench of rotting corpses and testosterone. If you sniffed real hard, you could also get a noseful of the change that was in the air. But was it change for the better? Or did the episode’s big twists of plot leave you crying flibbershtickey? Read on. I’ll recap, then you can debate it out in the comments.

‘GUTS IS GUTS’ | As “The Key” began, Negan gleefully prepared for Operation Scare the Hilltop Into Total Submission by gathering walker guts. Simon looked almost as enthusiastic about this as Chief Brody looked chumming the water in Jaws. The boss man, on the other hand, couldn’t wait to let Maggie & Co. feel “just the tip of what we are packing,” he said, smiling his Grinchy Claus smile. That would have them toeing the line faster than he could even redraw it! Though Negan welcomed back Dwight with a six-pack of Saviors brand craft beer, the turncoat was clearly eager to warn the Hilltop. Unfortunately, Simon insisted that, rather than speed off ahead of the gang to troubleshoot, Dwight ride with him. D’oh! As for Negan, he’d be driving himself, Lucille and a bucket of viscera — all the better, I suppose, to fetishize his bat some more and tell her how beautiful she looked covered in blood.

Meanwhile, at the Hilltop, after a day player reunited Rick with Judith, he was joined by Daryl for a broment at Glenn and Abraham’s graves. Sorry I drove a truck into the Sanctuary, Daryl muttered more or less. Rick wasn’t in the slightest fussed, however. He’d decided he’d been dumb to worry about hurting innocent people. He cared about Team AHK now, and “the hell with anyone else.” With that, Rick headed off to join the sentries that Maggie had posted all around the Hilltop. Watching him go, Maggie asked Rosita if she thought he’d come back from this. “Have you come back?” Rosita replied. Touché. After engaging in what passes for Season 8 small talk — in other words, how awesome it will be when Negan’s dead — they spotted something in the distance. Crates, it turned out. With a note written by someone who promised to give them the key to their future if the crates were filled with food and/or phonograph records and delivered to a rendezvous point. This could scarcely have sounded less believable if the note had offered to sell them the Brooklyn Bridge, yet Maggie, Rosita, Michonne and Enid still packed up the Hilltop’s LP collection and headed off to meet this mysterious food and/or music lover. 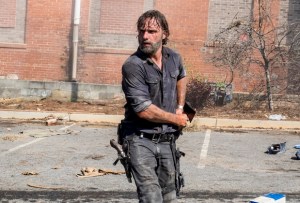 ‘LET’S GET WEIRD’ | En route to the Hilltop, Simon made like a taxi driver who just can’t take the hint and shut up, and forcefully engaged Dwight in conversation — “top guy to top guy,” ya know? The topic: the AHK alliance. As far as Simon could see, it didn’t matter what they threw at Rick and his merry band of rebels — and they’d already thrown a lot — their nemeses weren’t going to be convinced to surrender. The problem was, he suggested, “they don’t scare!” At that very moment, Rick spotted the caravan headed toward the Hilltop — and Negan bringing up the rear in the single-passenger lane. So, instead of sound the alarm, Rick played out a scene from The Fast and the Furious that ended with him ramming into Negan’s car. What do we do? the Saviors all asked after they managed to find street parking a ways away. Sit tight, said Simon. He and Dwight would power-walk back to the scene of the fender bender and “locate our benefactor.” (Whether by “our benefactor” he meant Negan or the individual who’d performed a crash test on him was cleverly unclear.)

So, how was the moving target? In the wreck, Negan’s car had been flipped, and since he’d made the ill-advised decision to travel with an open container of guts, he was also red-faced from more than mere embarrassment. After Rick opened fire and chased him through a door marked “Stay out,” no “please” or anything, Negan somehow managed not to nick his attacker even the teensiest bit while taking a swing at him with a gory Lucille. Then, just as Rick had a perfectly clear shot at Negan hustling up a flight of stairs, he — dang it! — ran out of ammo. Honestly, this wasn’t going too tremendously well for either of them. But, by and by, Negan fell off a ledge and clear through the floor below to the basement. Pursuing his quarry to the lower level for one of those scenes that are so dark that they make recappers wish they had precaps to tell them what they were squinting at, Rick engaged in his favorite hobby: threatening Negan. “This is where you die,” Rick said as if either the villain or we would buy it. 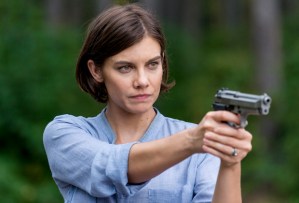 ‘WHY DIDN’T YOU JUST LET ME SAVE YOU?’ | In response, Negan offered Rick a “one-time deal” in memory of his “badass son”: If AHK would put the old arrangement back in place and their leader would play janitor for a while, the Saviors would forgive everybody and start collecting a 25 percent share rather than 50. Why on earth, asked Rick, would he trust Negan after what he did to the Scavengers? This being the first that Negan had heard about Simon going rogue — since for the purposes of this scene Rick hadn’t been allowed to mention it the last time his foe was going on about what a good “saver” he was — the baddie was not pleased. Quietly not pleased but not pleased all the same. Back and forth the two of them yammered, covering what was by then very familiar ground, till at last Rick found Lucille on the floor, set her on fire and beat down a door behind which there were what there always is: walkers. When not freaking out about another man handling his bat, Negan marveled that Rick was gonna get them both killed. And that was fine by Rick — “as long as it’s you first.” Naturally, neither of them actually did die. Negan escaped with Lucille and was nowhere in sight by the time Rick got back outside.

While all this way going on, Michonne, Maggie and Enid arrived at the rendezvous point, LPs in tow, and were greeted by Sally Jessy Raphael. OK, it wasn’t really Sally, it was a woman named Georgie who reminded me of SJR. “I do hope the records are music,” she said, henchwomen Hilda and Midge on either side of her. “I don’t accept spoken-word.” Before she could also reveal whether she preferred Debbie Gibson or Tiffany, Rosita appeared out of nowhere, gun trained on the strangers. That was fine, said Sally… sorry, Georgie. She didn’t want to trade knowledge with the weak. In short order, Georgie revealed that she hadn’t found many communities like the Hilltop (and not one for a long time before theirs). The dead brought out civilization’s best and worst, she said (duh), and while the worst had been winning, it wouldn’t forever. “If perhaps people can believe in people again,” she suggested, “four crates of goods is worth far less than a sustainable future and perhaps an exercise in trust” — a word she admitted probably sounded like “flibbershtickey” to Maggie & Co. And, since it did sound like flibbershtickey, Maggie called off the deal and ordered the strangers and their Magical Mystery Van taken to the Hilltop. 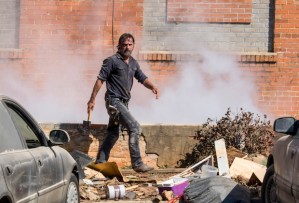 ‘THINGS DON’T JUST WORK OUT’ | Once Maggie & Co. were back home at the Hilltop, a battle raged between the cynics (her and Enid) and the optimist (Michonne, at every turn doing what Carl would want her to). Michonne wanted to make the deal and send Georgie, Hilda and Midge on their way before the Saviors came knocking. Maggie, backed by Enid, intended to turn their van full of food into the community’s own Meals on Wheels. If the Hilltop didn’t, “someone else will,” argued Enid, who was anxious for Michonne to stop acting like things ever worked out. In response, Michonne calmly reminded the teen that, thanks to Carl helping someone like Georgie says she wants to, the Hilltop now had in Siddiq a doctor and a friend. Harrumph, Enid pretty much replied. But finally, a glance at Judith and Grace convinced Maggie to follow the commandment of St. Carl. And she was immediately rewarded for it, too: Georgie lowered the price of her knowledge to one crate of records and even offered the Hilltop a sizable portion of the Magical Mystery Machine’s food stores. And before she, Hilda and Midge rode off into the sunset, promising to return someday, she gave Maggie A Key to a Future, a handwritten DIY book on everything from building windmills to refining grain. See? Nice people did still exist. Kinda kooky, yeah, but nice.

Over in the hour’s other plotline, as Simon and Dwight made tracks to the site of Negan’s “accident,” the former finally laid it all on the line for the latter: He was unhappy enough with the boss man’s management style that he was ready to branch out, find new communities and just move on. “Whad’ya say?” he asked as they neared Negan’s car, oil and gas mixing with walker guts beneath it. Dwight didn’t say anything back. Instead, he pulled out the pack of cigarettes in which Sherry’d left her ring, lit a menthol and flicked it into the gas, sending Negan’s car up in flames. “Good answer,” said Simon. Upon reuniting with their crew, Simon and Dwight sent the gang into a tizzy by revealing that they hadn’t found Negan. “Just blood,” said Dwight. Before  the army could be overtaken by panic, Simon reminded them that it “don’t matter if the big man ain’t here. We’re all still Negan.” And who knew? He could be back. Meantime, Simon wanted to alter the boss’ plan for the Hilltop — in light of what they’d done to Negan and all. The Hilltoppers were never gonna toe the line, no matter how often they were warned. So “we must expunge them!” Simon cried. “We must redact them! They are a mistake that we shall now erase! We are moving on… ” 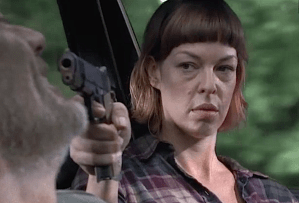 ‘WELL, S—‘ | Clearly, this hadn’t been what Dwight had thought Simon meant when he’d suggested “moving on.” But he was going to have a hell of a time getting a warning to the Hilltop before the Saviors laid waste to every man, woman, child and Englebert Humperdinck album within its walls. In the episode’s final moments, we learned what had become of Negan after his (latest) escape from Rick. First, we saw him unconscious, being driven along in the passenger seat of a car. When he awakened, he — and we — saw that the driver was multitasking, both steering and aiming a gun at him. And that driver was… Jadis, who scarcely let him get two syllables out before she said what we’ve been saying to him through our TVs all season — “Shut up” — and knocked him back out. So, what did you think of “The Key”? Well-mannered newcomer Georgie? Simon’s coup? Negan’s fate? Brilliant or “klumpf”? Hit the comments.