What would Carl do? You see those four words? You’d better get used to them. Get very used to them, in fact. Make peace with them, because based on Sunday’s episode of The Walking Dead, we’re going to be hearing (variations of) them a lot as we march back into battle and head toward the Season 8 finish line. On the plus side, “The Lost and the Plunderers,” co-written by co-EP Angela Kang (who replaces Scott Gimple as showrunner next season), grants a wish at the landfill that most of you made all the way back in Season 7. What is it? Read on and find out…

MICHONNE | Curiously, the hour was broken up into six segments, each of them titled for the character who was its focal point. In the first, Michonne, once she and Rick were done burying Carl, discovered the handprints that her late best friend had left with Judith on the front porch of their home. Not that there was much time for reflection — with walkers roaming the streets, the couple had to beat a hasty retreat. Not so hasty, however, that Michonne didn’t want to pull their getaway vehicle over and put out the fire engulfing a gazebo atop which Carl used to sit. (Wait, did he? What?) When the twosome finally left the now-ironically-named “safe zone,” Michonne asked Rick what he thought Carl had meant by his dying words, and suggested that the answer might be found in his letters. Not yet, said Rick. He wasn’t ready to read them. And he certainly wasn’t ready to learn from his girlfriend that his son had also penned a missive to Negan. Luckily, Rick had a distraction at the ready: He was determined to talk to Jadis, to reaffirm that her crew was theirs, not the Saviors’. Only no sooner had he and Michonne snuck into the landfill than a pile of debris came tumbling down, and quicker than you could say, “Dammit, Pig Pen!” walkers were lurching toward them like seniors at an early-bird special. 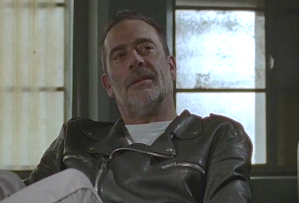 NEGAN | At the Sanctuary, Negan seemed to be equal parts pissed and impressed when he informed Simon that “Rick’s little one-eyed pride and joy played me,” thereby allowing the Alexandrians to escape from the Saviors’ fool-proof assault. How did it go at the Hilltop? “As requested,” said Simon. Though there had been no word from Gavin — little did they know, there wouldn’t be, either — Negan was sure everything at the Kingdom was hunky-dory. So, what was Simon’s next assignment, then? “The garbage people,” Negan replied. He wanted his henchman to remind Jadis & Co. that they had a deal by killing one of them. But “just one,” he added, knowing how eager Simon was to trash the dumpster-divers altogether. As their debriefing continued, we discovered that Simon was feeling particularly nervy. When Negan insisted that his way of teaching lessons worked, his lieutenant dared to respond, “Not lately,” and argue that they should learn their own lesson and find some new communities to “save.” Right on cue, Maggie’s special delivery arrived, further infuriating Simon since it was the zombified remains of Dean, meaning that his killer’s 38 other hostages were also from Simon’s satellite outpost. 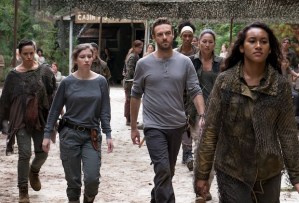 ENID | At Oceanside, blood-thirsty Rachel was suggesting to anyone who would listen that Aaron and Enid be killed for killing Natania. (Asking for a friend: Does Rachel ever say anything besides “Kill ’em”? She’s like the music from Friday the 13th: Kill kill kill ah ah ah!) Beatrice appeared to single-handedly decide that, since Natania was Cyndie’s grandma, the teen got to make that call. While Cyndie presumably went off and thought about it for a hot minute, Enid admitted to Aaron that she wasn’t upset because they were in danger, she was upset because Natania had basically forced her to kill her and she’d do it again, “even knowing it would feel this way.” Off that chat, Cyndie and Beatrice returned to take Enid and Aaron to the beach (which was especially lovely-sounding code for “kill ’em”). Enid made a 30-second argument to Cyndie that “to feel better” wasn’t a good enough reason to put her captives to death, and this being a C-plot, it worked. (Rachel can not have been happy about that.) As Aaron and Enid were escorted out of the community, Cyndie, having forgotten that visitors to Oceanside have no skills whatsoever at following instructions, told them not to come back. Once alone with Enid, Aaron revealed that he wanted her to return to the Hilltop, but he was going to hang back — hidden behind a tree, as far as we could tell — in hopes of convincing Beatrice and Kathy that Oceanside had to, just had to (!) join in the fight against the Saviors. “Promise me I’ll see you again,” said Enid. So, somewhere along the line, these two apparently became dear friends. (Maybe it was while Carl was sitting on top of that gazebo?) 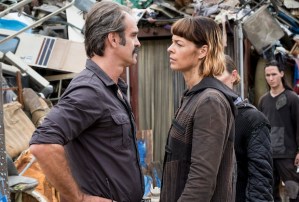 SIMON | In Simon’s segment of the program, he and a group of Saviors rolled up on the landfill to accept an apology from Jadis. “Feel free to refer to any notes you may have prepared,” he said. After she tried to lie that she hadn’t sided with Rick but delivered him to Negan, Simon, clearly choking on every syllable, said that so long as the Scavengers reverted to their old deal with the Saviors — and handed over their much-needed weapons and ammo — there would be no punishment for the betrayal. Once Jadis acquiesced, Simon took a moment to appreciate her latest painting and asked why on earth her people had chosen to make a dump their HQ? What had it been before? When she wouldn’t answer, he decided that he didn’t feel she’d expressed remorse for reneging on her agreement with Negan and shot Brion. Then Tamiel. And though Jadis protested that she was remorseful in the most complete sentences we’ve ever heard her use, Simon — Negan’s edict be damned — still responded to viewer feedback about the Scavengers by giving the order to gun down all of her people. When he returned to the Sanctuary, he fibbed to the boss that his mission had been “standard message and delivery… There was remorse.” Just then, Negan got a call over the walkie-talkie from Rick. 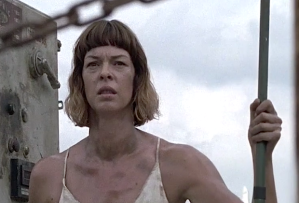 JADIS | Speaking of Rick, when he and Michonne escape from the walkers at the landfill by climbing a mound of garbage, they discover a shattered Jadis. Duh — the walkers were formerly the Scavengers! Jadis, now speaking like a normal person, revealed that she used to come to the landfill to find things to paint on. After the zombie apocalypse, she realized that the whole place was a canvas, and she and her people were the paint. They could transform that dump into something new, she’d thought. And “we did. This was our world, apart form everyone else in every way.” (Which is probably as much of an explanation for the eccentric speech and hand gestures as we’re ever gonna get.) When Rick made a shield out of a car door to make a run for it, Jadis pleaded with him and Michonne to take her with them. “I’m done with her games,” he said, and left Jadis behind. Later, she drew to her all of the walkers who’d been her friends and let them drop a la Sweeney Todd into a giant meat grinder. (Possible spoiler alert: Is anyone who’s read the comics thinking what I’m thinking — that this experience has left Jadis so changed, so hardened, that we’ve just witnessed the birth of Alpha, leader of the Whisperers?) 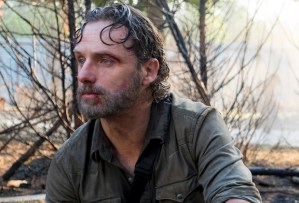 RICK | The episode’s final segment picked up with Rick and Michonne after he abandoned Jadis to the walkers. He didn’t kill her, he protested, “I just wanted her gone.” When Michonne suggested that this was the sort of help-when-you-can scenario that Carl had been talking about, Rick, overcome, pulled over and, as far as we saw, read only his son’s letter to Negan. Afterward, he rang up his nemesis, revealing that Carl was dead and had left notes for his dad and Negan. “He asked us for peace, but it’s too late for that,” said Rick, adding what could probably have gone without saying, “I’m gonna kill you.” For his part, Negan, stunned by Carl’s passing, seemed probably as human as he ever has. “That kid was the future,” he said, to which Rick responded, “The only future is one where you’re dead!” (Rick couldn’t seem to help himself in this scene. Like, at all.) By and by, Chatty Cathy laid the blame for Carl’s death at his father’s feet and hypothesized that his refusal to surrender was only going to get another loved one killed. Only question was, who’s next? “You are!” said Rick. (See? Couldn’t help himself.) Why he stayed on the line, I have no idea. In the end, all he did was allow Negan to tell him that he’d failed as a leader and as a father. “Just give up,” the villain concluded, “because you have already lost.”

So, what did you think of the episode? The end of the Scavengers? Aaron and Enid’s insta-bond? My Whisperers hypothesis? Hit the comments.