Why? In the wake of Carl’s demise in Sunday’s midseason premiere of The Walking Dead, that’s the question that doesn’t beg so much as demand to be answered. Why — especially since Robert Kirkman’s comic-book series has so much more story left to tell for Rick’s son — did the teen have to join Glenn, Abraham, Sasha, Beth and so many others on the AMC drama’s long list of casualties? Here with an explanation for TVLine is showrunner Scott Gimple.

TVLINE | OK, walk me through the decision to veer again from the comics and kill Carl.
We wanted to tell a version of the comic story that kept emotions similar to what you’d get when reading the [source material] but in different ways, so that the comic-book-reading audience didn’t expect what was going to happen. We plan to do that moving forward as well — sometimes pulling moments from the book in sort of verbatim ways and sometimes in ways that are very different, with the goal of heightening the message in some way. Carl’s death fell into that [category]. This in many ways is sort of the ending of an era for The Walking Dead and the starting of a new one.

TVLINE | Mm-hmm. But why Carl?
He needed to be the person who pushed the world in a certain direction, who put out a certain message. That message might even be denied, but we wanted it to have the incredible weight of coming from this young hero in the most serious of circumstances. And [his demise] can show that this world is still the world of The Walking Dead, where these things happen. It couldn’t have had more gravity [if it had happened to another character]. 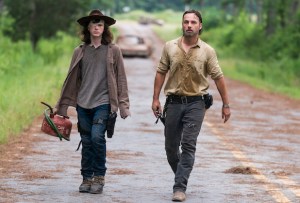 TVLINE | So, Carl’s dying wish was for everybody to just get along and tell the Saviors, “Bygones.” How on earth is Rick supposed to sell that notion to, say, Glenn’s widow?
I’ll just say that it isn’t a slam-dunk that Rick can just accept the vision that Carl has. Other people may need to try and sell him on it.

TVLINE | Even if Rick gets on board, Negan doesn’t strike me as the type to bury the hatchet unless it’s in someone’s head.
Yeah, not after what happened. [The AHK alliance] messed the Sanctuary up good! And even if Negan really did want to jump into [a cease-fire], he is someone who is very conscious of optics… and his image, so that makes it harder for him to make a deal with the wrong people… or who are maybe looked upon as the wrong people.

TVLINE | What was with that last shot of Rick under the tree? Had he hurt himself deliberately, or was that blood just a side effect of having buried Carl?
Those are great questions that I probably shouldn’t answer. But I will say there are answers to that coming. There’s a great deal of meaning on that shot.

What do you think that last shot means? And can you imagine a Walking Dead in which Carl’s vision of the world has actually come to pass? Hit the comments.