Warning: The following contains spoilers for Sunday’s fall finale of The Walking Dead.

If we hadn’t already known it was bad news for The Walking Dead’s Team AHK when Rick discovered last week that the Saviors had dispatched the walkers that had turned the Sanctuary into a prison, we sure as hell knew it when, in Sunday’s fall finale, Negan rolled up to the gates of Alexandria with a big announcement: Everyone was to line up outside their homes, and whoever’s apology for the uprising was the lamest would be biting the dust along with Rick. But did the villain make good on his threat? Was Carl killed as you feared he would be? Read on and find out…

‘DIFFERENT FROM PICTURE’ | As “How It’s Gotta Be” began, Rick and the Scavengers learned PDQ how dire their situation was. (Coming under fire will do that.) In some none-too-subtle foreshadowing, just before the shots rang out, Rick flashed back to his argument with Carl over killing all the Saviors vs. finding something more. As the Scavengers scattered, headed presumably for the nearest junkyard, Rick just happened to get picked up by Carol and Jerry. At the same time, Enid and Aaron were on the road to Oceanside, hoping against hope that they could convince them to join the alliance. Deciding that they couldn’t show up empty-handed, they took a detour to a distillery — and came away with a whole truck full of offerings for the Oceansiders.

Back in Alexandria, everyone was blissfully unaware of just how wrong things had gone. So Daryl and Tara got to tell Michonne and Rosita, respectively, that Operation Truck Hole had been a success; therefore, it was only a matter of time before the Saviors surrendered. (If only!) In another moment of not-at-all-subtle foreshadowing, Carl was seen writing a letter to his dad. (Maybe the show was laying it on too thickly to really bump off such a beloved character? Making us think we knew what was coming when it was about take a hard left?) That night, Aaron and Enid were napping roadside when they spotted someone around their distillery truck. “You shouldn’t have come here,” said Natania, whacking Aaron. Instinctively, Enid shot her friend’s attacker, accidentally killing Cyndie’s grandma and maybe any chance they’d had of recruiting Oceanside. 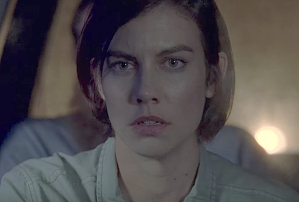 ‘ALL WE NEED TO DO IS SURVIVE TONIGHT’ | In Alexandria, the dead of night suddenly got a lot livelier when Negan declared (via megaphone or what?) that everyone should “cut through the cow s—” and get to the bottom line. Which was? “You lose,” he said. “It’s over.” Then he gave the Alexandrians three minutes to line up to apologize, or he’d start bombing and reduce the community to rubble. From there, we cut to Rick, Carol and Jerry racing down the road in separate vehicles, and bam! Jerry’s car was hit! Elsewhere, en route to their rendezvous with Rick, unaware that the plan had been shot to hell, Maggie told Jesus that she doubted the Saviors were ready to surrender. After all, she asked rhetorically, “Would we give up that quick?” Team AHK just had to wait until the trapped Saviors were out of food and water — and choices. (If only!) Just then, they happened upon a downed tree that Maggie could just tell hadn’t fallen of natural causes. “It’s them,” she knew.

Before you could say, “Aw, s—!” Maggie, Jesus and their companions were surrounded by Saviors, a coffin had been propped up in front of Maggie’s car — who was in it, you had to have been dread to wonder — and Jerry had been hauled out of the Saviors’ truck, looking like he was about to become a sacrifice. (Nooo!) At the Kingdom, Gavin announced that everything they produced was now the Saviors’. And btw, they were moving in. In Alexandria, Carl set about evacuating as many Alexandrians as he could. When Michonne balked at just giving up Alexandria, he reminded her, “This is my show” — she’d told him that herself. So they were going with his plan. Which included him “answering the door like a big boy,” as Negan put it. “Kill me,” said Carl. If Negan had to strike out someone as punishment, let it be him. Just as Negan thought the two of them were having “a moment,” Carl’s convoy of evacuees fled Alexandria. As the Saviors began bombing Alexandria, he was headed for the exit when a car exploded near him. 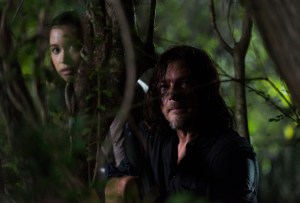 ‘I PLAN ON SLEEPING TONIGHT’ | While at the Sanctuary Eugene tried to drink away his inner conflict, in the Kingdom Gavin pleaded with the Kingdommers to give up Ezekiel rather than let the situation become “traumatic.” Ultimately, he gave them five minutes, then it was “Negan’s way.” At the roadblock, Simon explained that he hoped Maggie could make him look better in Negan’s eyes after Gregory had made a fool of him. How? By saving Jerry’s neck by volunteering to get in Sasha’s old coffin, or by going back to the Hilltop to keep producing. Oh, and a Hilltopper would have to die. That was no problem — Maggie and Jesus just happened to have in tow a guy named Neil who I’d swear I’d never even seen before. (Don’t expect “justice for Neil” hashtags.) Agreeing to keep producing for the Saviors, Maggie asked a favor: Could she have the coffin to bury Neil in?

As the Saviors swarmed Alexandria, Dwight led the bunch of them who’d pursued the convoy into an ambush by Daryl, Michonne, Tara and Rosita, and in the moment of truth, shot down a bunch of his own people before being winged by Laura. While Negan went to make spaghetti and wait for Rick, he left his flunkies strict orders to bring Carl to him alive. Only the teen was great at escaping behind his own smoke screens, and though stunned and deafened by the explosions, made his way into a sewer. Later, Eugene visited Gabriel to inform him that he’d left a guard “crapping his khakis,” so he could get out with Carson. He even “dropped” the keys to a getaway car. Back at the Kingdom, Ezekiel set off a ginormous explosion to distract the Saviors, then locked out Carol, telling her to save his people like she saved him. At the Hilltop, Maggie pulled out of the pen the Savior who’d tried to kill Jesus (the one he’d insisted on sparing). He laughed at the threat of execution, saying, “If cupcake wants to put on a show, let her” — at which point “cupcake” shot him dead. 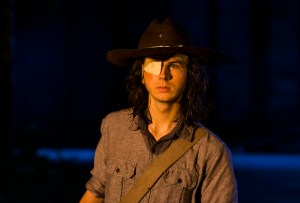 ‘DO YOU EVER SHUT THE HELL UP?’ | As the episode drew to a close, Dwight desperately tried to explain to Daryl that he’d led the Saviors to the ambush; he couldn’t be sent back, because one of the Saviors got away. After he revealed that Daryl and Tara’s Operation Truck Hole hadn’t allowed the Saviors to escape the Sanctuary but Eugene’s ingenuity, he was allowed to live. Maggie sent a note — the coffin — to Negan with her dead Savior in it and a warning, that they had 38 more. “Stand down,” she ordered. At the Kingdom, Morgan overheard Gavin detail Negan’s plans for Ezekiel’s head. At the last moment, Michonne struck out on her own rather than reenter Alexandria through the sewer with the rest of her group. Just then, Rick was sneaking back into his house calling out for Michonne, Carl and Judith.

Of course, it was Negan who greeted Rick instead. For a while, they exchanged blows and barbs; for a hot second, it appeared that Rick was going to get to Lucille Negan; but in the end, Rick just escaped back into the smoke. When he ran into Michonne, she was slicing and dicing a Savior who’d just told her that the destruction was all her fault. In the sewer, Rick was relieved to see Judith. But where was Carl? Was all that foreshadowing not a smokescreen for someone else’s death? At the end of the tunnel, there was… not Carl but Siddiq. “I brought him here,” said Carl. Oh thank God, he was alive. Oh f—, he’d been bitten bringing Siddiq there. While I try to remove the huge lump from my throat…

What did you think of the fall finale? Grade it in the poll below, then hit the comments. Were you surprised TWD killed off Carl — and in that way?