Wait, wait, wait, wait — things cannot be as they seem, right? Could the outcome of The Walking Dead‘s Saviors/Scavengers-vs.-Everybody Else War really rest in the trembling hands of Eugene Porter, arguably the only character in the series’ history who even comes close to Gregory for sheer weaselliness? It sure seemed that way by the end of “Time for After.” 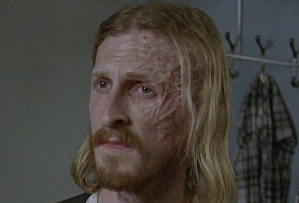 ‘I NEED YOU TO CEASE AND DESIST ALL BETRAYALS AND BACKSTABBERY’ | Early on in the episode, Eugene assured Dwight that, so long as he stopped colluding with AHK (his name for the Alexandria/Hilltop/Kingdom alliance, pronounced “ock”), Negan would never have to know about his treachery. In response, Dwight told his frenemy in the most emphatic of terms that the Saviors had already lost the war, and to end up on the winning side of it, “all you have to do is nothing.” Though the scare tactic didn’t flip Eugene, he still promised to keep Dwight’s betrayal on the D.L. so long as it brought no harm to anyone within the Sanctuary’s walls. (That is, “no harm” aside from the casualties they’d already suffered and the ever-present threat of walkers beating down their door.) Later, when Gabriel — who was dying of multiple infections, not a walker bite — asked Eugene to do the right thing and, when an opportunity presented itself, help get Carson to Maggie, the coward reminded the preacher that he was a small sorta person who didn’t stick his neck out for anybody.

Upon returning to his quarters, Eugene was visited by Negan’s wife Tanya, who was reluctant to make her second payment of a bottle of wine for boombox repair since he’d yet to fix it. When he admitted that he didn’t want the sauce, he needed it to catch “some increasingly elusive Zs,” she reminded him that she and sister wife Frankie had come to him with a plan to kill Negan and turn the Sanctuary into a real sanctuary. But instead of thinking of everyone, “you took care of you,” she said, “and now you have to live with that.” Amen! Off that encounter, Negan called Eugene into a meeting that mostly consisted of sweet talk about how awesome that “spongy organ” between the smarty-pants’ ears was. (Though he certainly didn’t seem too brilliant when he tried to kiss Negan’s hand when it was offered for a shake… ) Falling hook, line and sinker for the lip service that the villain paid to his intelligence, Eugene returned to his room to work on Tanya’s boombox and suddenly had a brainstorm. In no time, he’d built a remote-control glider to lead the walkers away from the Sanctuary with noise coming from the iPod that he’d retrieved from Sasha’s travel coffin. Unfortunately for him, just as he was about to launch it, Dwight pointed a gun at his head, effectively grounding the flight. 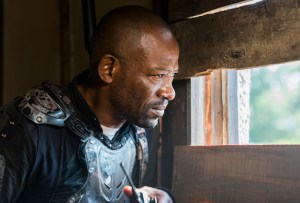 ‘CRACK IT OPEN… SAVIOR BUFFET!’ | Meanwhile, Morgan and the snipers keeping an eye on the Sanctuary offered to help Rosita, Michonne and Tara cover Daryl as he drove a truck into the building, thereby creating an entrance for the walkers and bringing an end to the war right then and there. That was the plan, anyway. Only, before it could be executed, Rosita bounced. In the wake of Sasha’s death, “I believe in Rick Grimes,” she said, not in taking chances that didn’t need to be taken, if they just had a little patience. Next, Michonne bailed, too. “What we’re about to do,” she told Daryl, “it’s not worth risking us.” OK, so it was just going to be Morgan and Tara covering Daryl with the snipers. No biggie — they could still do it, Tara was sure. As Daryl began plowing through walkers en route to the Sanctuary, Eugene weighed his options and elected to launch his audio glider. In response, rather than shoot the pilot, Dwight blasted his noisemaker out of the sky. Then, while Daryl and Tara headed for home, Eugene watched in horror as walkers came lumbering through the big hole in the Sanctuary that the truck had made — the big hole that effectively turned the building into one big cafeteria.

Rage building inside him, Eugene ran to Gabriel to announce that he would not be helping get Carson to Maggie, and he would not be ending up like Sasha. No, he was going to do whatever it took to stay alive, and he wouldn’t feel bad about it in the slightest. Off that declaration, Eugene went to Negan with a new plan to get rid of the walkers that had, in an instant, become well-fed squatters. All he needed was for Negan to get him to his bullet-making equipment or get his bullet-making equipment to him. And no, Eugene did not give a damn about the vengeance that Negan would exact upon Rick & Co. once he was no longer a prisoner of the Sanctuary. Oh, and Eugene had another big announcement, he said. “Jesus,” Negan exclaimed, “you are magnificent!” But, before Eugene exposed Dwight as a turncoat — if he ever intended to — in came Dwight with the other lieutenants. So what’s the other announcement? Negan asked. “I think I can fix the intercom system,” Eugene said. So maybe there’s at least a scintilla of humanity left in him. At any rate, he ended the hour just about as tortured as we’d ever seen him. He couldn’t even bring himself to swallow all of the wine he gulped (which seemed awfully wasteful in such an apocalyptic situation). 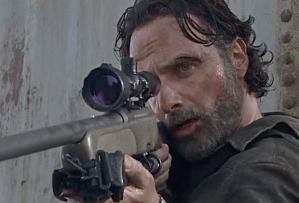 ‘YOU CAN JOIN US, OR YOU CAN DIE’ | While all of this was going on, Rick remained a guest of the Scavengers, which meant that, when not sweating his sack off in a transit container, he was forced to pose for photos, front and back. Uh, why? “Sculpture, after,” said Jadis. “After what?” Rick asked even though there was no possible answer that wasn’t going to be horrifying. By and by, he — and we — learned that “what” was a once-in-a-lifetime encounter with a walker in a spiky hood from the Winslow collection. As will happen when a series lead is threatened, Rick — even with his hands tied — not only survived but managed to behead the walker, handle Jadis’ henchmen and wrestle her to the ground within biting distance of the head. So the Scavengers could “sculpt whatever s— you want,” he yelled, “but I am leaving!” Why none of them just shot him at that point, I have no idea. Perhaps they took super mega seriously his threat to return with his people and attack… you know, sometime.

Anyway, since nobody did pull the trigger, Rick offered Jadis another last chance to make a deal, and this time, she took it, agreeing to have her people accompany him and his allies to ask Negan’s lieutenants to surrender. Once the baddies gave up, he and only he would kill Negan. “After, Saviors’ things our things?” she asked. No, just a fourth. Fine, she said — provided that he’d pose for her afterward sans boxers. Even with the no-nudity clause included in the agreement, a deal was struck (whatever a deal made with that two-faced crew is worth). Next thing we knew, Rick was dressed and arriving at the perimeter of the Sanctuary with Jadis and the Scavengers. When he couldn’t reach any of the snipers on his walkie-talkie, he climbed a water tower (?) to get a clearer view of the situation and discovered… all of the walkers that had been surrounding the Sanctuary had been put down?!? So, in a single day, Negan had gotten Eugene his bullet-making equipment and he’d made enough bullets to take out all of those walkers? Okaaay…

What did you think of “Time for After”? Did it make sense to you that Eugene would sooner turn on his and Abraham’s old friends than on Dwight? How nuts was Rick to try again to deal with the Scavengers? Hit the comments.