Warning: The following contains spoilers for Sunday’s Fear the Walking Dead. But you knew that already, didn’t you?

Sunday’s Fear the Walking Dead not only revealed where Al has been since she ran afoul of CRM in the Season 5 premiere, it introduced a really appealing new character (beautifully played by Sydney Lemmon), kick-started a lovely romance that we never saw coming, and dropped big hints about the group that has — or, depending on the timeline, soon will have — TWD’s Rick Grimes. Read on, and we’ll go over the lot of it!

‘I DON’T STAY IN THE CAR’ | Early on, “The End of Everything” was all about Al going so far as to lose a boot in trying to escape from her uniformed captor, at least long enough to hide the tape that she’d made of the fallen CRM member at the crash site. Upon being re-apprehended, she — and we — discovered that said captor was a woman. We wouldn’t find out until the end of the hour that her name was Isabelle, but for ease of recapping, I’m gonna start calling her that early. OK by everybody? Cool. Anyway, the next time Al got away, she probably could have really gotten away from Isabelle if only she’d made tracks. Instead, she poked around the compound at which they were parked and got an eyeful of the legendary chopper. Caught again, she noted Isabelle’s upset at having to inform her higher-ups over the radio that she wasn’t inbound with the payload yet because she had to refuel. Isabelle was even more perturbed to be told that they were sending “a reclamation team.” We never learned what that was, but we can probably all agree it doesn’t sound nice. Once Isabelle got off the phone — sorry, radio — she threatened to break Al’s leg if she didn’t tell her where she’d hidden the damn tape. Ha! But if Isabelle broke Al’s leg, said the captive, she’d never talk. “I can be really spiteful like that.” However, Al would reveal the whereabouts of the telltale tape in exchange for Isabelle’s story. Oy, that again! 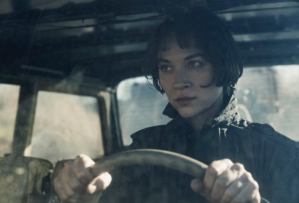 In the end, Isabelle didn’t break any of Al’s bones; rather, she took the journalist along as she drove to a fuel drop at the top of a mountain. Well, drove toward it, anyway. A rockslide blocked their path well before they reached their destination. On the plus side, it stopped Al from playing 20 rounds of 20 Questions that Isabelle — whom she called Happy since she wouldn’t smile or disclose her name — wasn’t about to answer. On the downside — well, the extra downside — it gave Al a chance to obstinately refuse to stay in the car or wear protective gear. Angry, Isabelle said that if her companion insisted on being “transactional,” she’d give her this: “Everything I do is to ensure that there’s more than stories left when I die.” That being a start, Al agreed to put on protective gear. But it was a good thing she hadn’t stayed in the car — another rockslide just about demolished it. (Apparently, not staying in cars was a big thing for her. “That rule’s kept me alive,” she said, “even before people were eating each other’s faces.”) Putting on the protective gear was lucky, too — it saved her from being bitten by a walker that emerged from the rubble as she retrieved her camera bag to hike up the mountain. 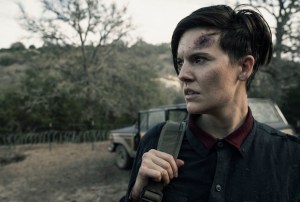 ‘WHAT I TOLD YOU TODAY, I’VE NEVER TOLD ANYONE’ | Given how protective Al was of her camera bag, Isabelle searched it and found a hidden tape: The Bog #7. Enraged that Al had had it the whole time, Isabelle looked ready to shoot her… at least till Al suggested, “You might wanna watch that before you spray my brains across the ground.” It did not turn out to be the tape that Isabelle wanted. It was Al reporting on the Army and National Guard mobilizing as the zombie apocalypse turned the world upside-down. “I’m sorry, Jesse,” she said on the tape. “I should have stayed… before and after.” Making it clear that that tape was not a part of their transaction, Al revealed, “I could have said goodbye to my brother.” Instead, she’d gotten the story; now the story was all that was left. “Since we’re sharing,” she went on, why had Isabelle killed her partner? Naturally, Isabelle refused to answer. She just warned Al to avoid anyone wearing a jacket like hers. “We are a force who are not living for ourselves or for now,” and while Al was making every day the past, “we have the future.” Cryptic, but it was something. Camped out that evening, the two bonded a bit, with Isabelle suggesting that “you and me are the same kinda bird” and admitting that she’d killed her partner because she’d been doing her job. Al’s stories mattered, she added. “Some things matter more to me, that’s all.” 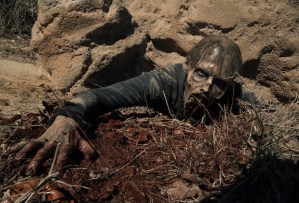 The following day, the pair grew even closer when they were forced to rely on one another to survive the perilous rock-climb to the top of the mountain. At one point, Isabelle lost her grip and was left hanging by the cord that connected them. But Al wouldn’t let her drop. So at the top of the mountain, Isabelle rewarded her with fresh intel: Her partner had been her friend, Beckett. When he’d seen what the radiation had done to the walkers at the nuclear plant, he’d cracked. She’d broken protocol in hopes of saving him, but in the end, she’d been forced to shoot him. She couldn’t let him just walk away with the maps that he had in his possession. Her group and its location had to remain a total secret. That being the case, yes, Isabelle confessed, once she got the tape from Al, she’d have to kill her, too, “for operational security.” Shortly, Al got the drop on Isabelle and pondered the possibility of just leaving her there to go after the helicopter herself. Isabelle warned Al that the reclamation team would arrive in less than 24 hours, and if she or any of her friends were near that chopper when they showed up… well, “just don’t be.” Isabelle further pleaded with Al to destroy the tape. Why? Finally, Isabelle was ready to talk. That night, though she refused to share the name or location of her group, she said that it was bigger than all of them, and “right now it’s the only thing that matters.” 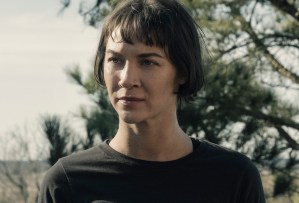 ‘I WILL DIE HERE IF I HAVE TO’ | The reason Al’s tape is so important, Isabelle explained, is that her footage of Beckett’s maps could reveal CRM’s location and make “what we’re working towards vulnerable.” So if Al really wanted to make her brother’s death and all her stories mean something, she had to “make sure there’s people around to hear them one day.” At last, Al agreed to show Isabelle where the tape was, the two of them shared a beer, and Isabelle admitted that she wished she’d met her companion before the apocalypse — or maybe when it was all over — in such a way that I started thinking, “Aw, kiss! Kiss!” like I was 12. “Everything is so ugly nowadays,” sighed Al. “This is nice.” And that it was. The following morning, Al took Isabelle to the spot where she’d hidden the tape on a walker. Unfortunately, she still had to kill Al. Why had Al taken her there? Why had she signed her own death warrant? “Because for however long it takes you to pull that trigger,” Al replied, “I’ll know I chose something other than a story.” Her days down to minutes, Al gave Isabelle The Bog #7 and asked her to make sure that Jesse’s story mattered. “Make sure he lives.” There was nothing left for Isabelle to do but shoot… but she couldn’t. “I want you to live,” she cried. So she was going to let Al go, so long as she never pursued the story or tried to find her. What’s more, Isabelle shared her name and that she was from Indiana, and she actually was happy, because “I got to see the prettiest thing I’ve seen since the end of everything.” With that, they did finally kiss before going their separate ways.

Later, Isabelle reported to her colleagues that she had the payload and received clearance to return to… base, I guess. (What exactly the payload was, I’m not clear on, are you?) Also in her possession: the Bog tape. For her part, Al began a new chorus of “Morgan, do you copy?” before being reunited with her pals, spinning a yarn about how she’d been overrun by the dead, and there hadn’t been a story after all, and holy crap, Morgan, when did you adopt a dozen kids?!? Morgan and Alicia would explain later. But it was clear that Al had turned a corner. Changed by her experience with Isabelle — and the introduction of “more new people” — she blurted out her last name, which I couldn’t possibly spell here. “I had two parents with Polish names who insisted on double-barreling,” she told Morgan and Alicia. And I had a funny feeling I was gonna like Al 2.0. What did you think of “The End of Everything”? We have to see Isabelle again, right? But will it be on Fear TWD, TWD or in AMC’s Rick-centric movies? Hit the comments with your theories.