As if we needed another reminder that no good deed goes unpunished! In the Season 5 premiere of Fear the Walking Dead, Morgan, Alicia and their band of post-apocalyptic altruists weren’t merely stymied at every turn, they soon went from trying to help those in need of a hand to needing one themselves. How’d it all go so wrong so fast? Read on… 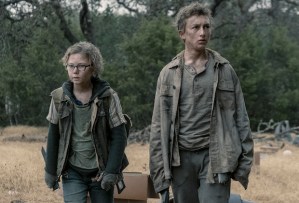 ‘IT’S GOING TO BE LOUDER THAN WHEN DAD’S BARBECUE EXPLODED’ | As “Here to Help” began, we were introduced to young Dylan and his big brother, Max, whose stab at deer hunting drew a pack of, as they called ’em, “growlers.” Luckily, before our new acquaintances could become items at a walker smorgasbord, a distracting plane flew overhead. Significantly less luckily, it crash-landed nearby a second later. “It’s OK,” said Alicia, emerging from the wreckage. “We’re here to help.” And that she did, slicing her hand to ribbons as she downed walker after walker with a propeller blade. Our heroes, it turned out, had been on their way to rendezvous with a survivor named Logan, who’d been cornered by walkers at a faraway truck stop. Only, obviously, the skies had not been as friendly as our protagonists. After coming to in the cockpit, Al radioed Strand, telling him to get back to the denim mill and find her tape labeled Skidmark — that guy had a plane, she said, and they were gonna need to be picked up. (John figured Strand was out of radio range, but we soon learned that he had, in fact, gotten the message.) On the battlefield, Al became fascinated by a walker wearing a helmet and some kind of military gear (like something the alien army would’ve worn on V, only black). While June tended to Lucy, who’d been impaled in the crash, Alicia noticed a sign indicating that they were in a radiation area — could we be about to learn the origins of the zombie apocalypse? (Spoiler alert: Nope.) First, they had to get past the approaching horde… which they did, thanks to Max and Dylan’s sister Annie — this show’s answer to Stranger Things’ Mad Max? — squealing up in a van from Camp Cackleberry. Once they were on the road, she scoffed at the notion that they should worry about walkers. Sorry, growlers. They “are the least of our problems,” she said to her new passengers. “You have no idea where you landed, do you?” 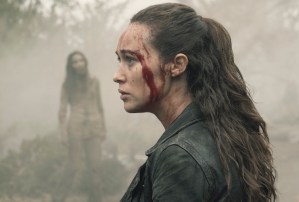 ‘THIS PLACE IS WORSE THAN IT SEEMS’ | Making tracks, our gang learned from the kids that they’d been passing through the area with their folks when they got stuck. The kids, in turn, learned just how eager our gang was to get to Logan — and couldn’t believe it. “People don’t just go around helping people they don’t know!” said Max. With the patience of the saint he’s always trying to be, Morgan explained that they were on a mission to make things better wherever and however they could. “Good luck with that,” cracked Annie, adding that it wasn’t just the radiation signs that made the area so ominous, “it’s the… you’ll see.” Thanks, Annie. Super helpful. Before long, the Camp Cackleberry van was stopped in its tracks by a roadblock made of walkers strung together. Above the travelers was a tree with severed walker noggins dangling from its branches like the world’s grossest Christmas ornaments. (Points for ghastly style!) Annie told Al she didn’t know who would’ve done such a thing but that obstacles like this were all over the area. Oh, and another thing: No way was she driving through that writhing roadblock. Fine, then, said Morgan. They’d walk. Logan was the first person their group had heard from who’d wanted help and who could be helped, Alicia added, and they’d be damned if they weren’t gonna get to him. Hell, even Lucy, with a big metal thing protruding from her chest, was like, “Let’s go!” So, ultimately, the roadblock was cleared away, and Annie drove her bossy Lyft passengers toward Logan. But “he better be worth it,” she said. 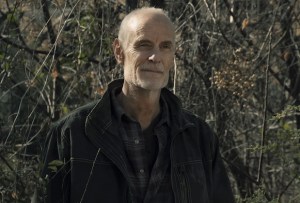 ‘IT’S NOT GONNA BE PRETTY’ | Once Morgan & Co. reached the truck stop where they expected to find Logan in dire straits, they found… er, no Logan and no straits, dire or otherwise. There wasn’t a walker in sight. After Lucy told the kids — and reminded viewers — about Clayton (aka Polar Bear), the do-gooder whose legacy they were trying to build upon, Morgan suggested that they eventually join them at the mill. They even have movie nights there, added John. That would’ve sold me on the spot, but the baby-faced cynics remained skeptical. And rightly so, it turned out. After Alicia reported to Morgan that it appeared no one had been at that truck stop for a long time, the whippersnappers pointed their guns at their elders and prepared to vamoose. There’s nothing to be afraid of, Morgan assured them. Yeah, Annie replied. “That’s what people always say when there’s something to be afraid of.” Following their exit, June removed the metal thingy that was making Lucy feel like “a human coatrack,” and we cut to the mill, where an older fella (hey, that’s Max Headroom, Matt Frewer!) let himself in. Back at the truck stop, Morgan finally reached Logan… who was — all together now — the older fella. He’d been Polar Bear’s partner in the trucking biz and didn’t “share Clayton’s charitable nature.” That being the case, Logan and his crew had reclaimed the mill that had been his in the first place. He didn’t want a fight, he added. “I just want what’s mine.” So Strand, Wendell, Sarah and Charlie were stuck at the gate like uncool club kids waiting to be granted admittance by a bouncer who was never going to let them in. Logan had been watching our do-gooders, he said. They want to help people — fine, now they could help themselves.

‘YOU MISSED A REAL S— PIE A LA MODE TODAY, JIMBO’ | That night at the truck stop, John suffered a crisis of faith. “I’m starting to think maybe we got all the luck in the world,” he told June. It was just too terrible a shame that no one would let them share what they had. To perk him up, June reminded him that “I didn’t think that anyone could help me, not even you… until you made me believe it. So that’s all we have to do… find a way to make other people believe it, too.” Outside, Alicia was relieving some tension by bashing walkers when she was approached by Morgan. He knew she was pissed, crushed, the works. But he was still gonna try to find the kids. And they all had things to atone for, he added, so maybe it was right that it was hard. “It shouldn’t be this hard,” she replied. Meanwhile, Charlie had managed to find a way into the mill to retrieve Al’s tape, so Strand was watching her interview with Skidmark… who turned out to be Victor’s worst nightmare, Daniel, alive and well! At the same time, Al snuck back to the site of the plane crash to more closely examine the uniformed walker. On him, she found a map with three circles linked and the letters CRM. She was right, she told Morgan by radio. There was a story there! And just like that, she was KOd by another, less-dead guy in uniform. So, what did you think of “Here to Help”? Grade it in the poll below, then hit the comments.