Warning: The following contains massive spoilers for Sunday’s episode of The Walking Dead. Then again, it’s a recap. Of course it contains spoilers!

Upon being reunited with a fallen friend in Sunday’s The Walking Dead, Rick said, “It feels like it’s ending.” And well it should’ve, given that the episode had been sold as the last for Andrew Lincoln’s embattled hero. However, by the time the hour was over, it felt, er, decidedly less like his story was at its conclusion. Why? (Well, here’s one big reason.) How? What the… ? Read on, and we’ll review “What Comes After” in detail. 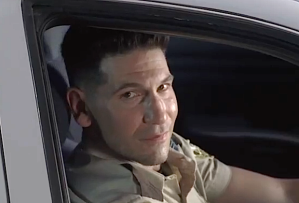 ‘GODDAMN, COWBOY, YOU LOOK LIKE S—‘ | The trippy installment began with a wounded Rick telling Season 1 Rick to wake up already in his hospital bed. Then Season 1 Rick turned the tables and told present-day Rick to wake up. (Hopefully, you got used to that sort of thing fast: Whether Rick was awake or not at any given moment was a big point of concern throughout “What Comes After.”) Eventually, present-day Rick painfully extricated himself from the piece of rebar on which he’d been impaled, remounted his horse (which for some reason had hung around in spite of the approaching herds) and rode to a rickety nearby house. Taking a breather inside, Rick lost consciousness and found himself back in his old patrol car with Shane, who was every bit the prick you remember. When Judith’s dad explained in this dream/nightmare scenario that he was looking for his family, Shane replied, “How is my baby girl, by the way?” But their reunion was actually pretty warm, all things considered. Shane was intent on taking credit for Rick’s transformation into an a–hole and even forgave him for what went down that fateful night in the field. Then, all of a sudden, Rick awakened to find that a walker was thisclose to taking a bite of him, and had to punch his way out of the opposite wall of the house. (Not for nothing, but barely-conscious, half-dead Rick suffering from massive blood loss is stronger than any of us.) Thankfully, again, his horse was just waiting around outside for him. 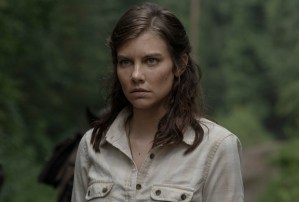 ‘YOU THINK GLENN WOULD WANT THIS?’ | Meanwhile, Anne — despite not having an A — arranged for her rendezvous with the helicopter people (which I guess is what we’re gonna call ’em until we get a clue about the group’s actual name), and Maggie arrived at the door to Alexandria’s prison, only to be blocked by Michonne. Those of you who read our earlier story on this confrontation know how intensely it played out, with Hershel’s mom reminding her friend that after she’d been widowed, “the one thing I had was knowing I was gonna see Glenn’s murderer die, and you took it from me!” What none of us could have known was that in the end, Michonne would relent and hand over the keys. At first, Negan baited Maggie, reminding her in graphic detail how he’d pulverized Glenn’s head and daring her to “kill me… It was worth it.” But after she ordered him into the light, she realized that he was trying to get her to use that crowbar on his cranium “so I can be with my wife,” he sobbed. “So I can be with Lucille!” Seeing the Saviors’ former leader reduced to a simpering basket case, Maggie had a change of heart about the manner in which she intended to settle their unfinished business. “I came to kill Negan,” she said as she returned him to his cell, “and you’re already worse than dead. That settles it.” When she left the prison, Michonne barely had a chance to notice that there wasn’t blood on Maggie’s crowbar before Dianne alerted them to the Rick-mergency already in progress. 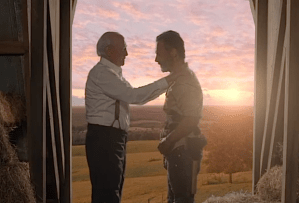 ‘IT FEELS LIKE IT’S ENDING’ | While all that was going on, Rick continued leading the herd down the road, fighting to remain conscious every step of the way. (How he convinced his horse not to trot off at top speed with hundreds of walkers behind them, I can’t imagine.) When next he passed out, he found himself back in Hershel’s barn. There, his dear old friend reassured him that he needn’t worry about Maggie — she was strong and only getting stronger. Neither did Rick have to concern himself with keeping his family together. In a subsequent reverie, Rick found himself in a horrifying landscape that was corpses as far as the eye could see. Some (Jesus, Rosita) were familiar faces; others (Beth, Carl), clearly stand-ins. Or, technically, lie-ins. Since presumably Chandler Riggs and Sarah Wayne Callies weren’t available to resurrect Rick’s son or wife, Sasha rose from the cadavers to explain that it was OK that everybody had croaked. “’Cause you did your part, like I did mine… like the others did before us,” she said. “They gave us the strength that we needed to do what we had to do for the others, and the others draw strength from us. We make each other better, and it never ends.” What’s more, she added, the good didn’t even out the bad. “It crosses over toward the brave and loving.” (Hey, here’s hopin’!) Before waking him up yet again, Sasha said that he wouldn’t find his family because they weren’t lost, “and you are not lost.” 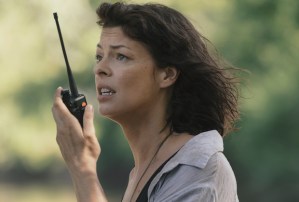 ‘FIGHT FOR ALL OF US’ | Snapped back to consciousness, Rick found himself at the campsite near the bridge. As the herds converged on him, he led them toward the bridge, only to collapse — and be saved by Michonne, Daryl & Co. Happy to have been reunited with his family, Rick was ready to shuffle off this mortal coil. But his significant other insisted that he fight to carry on. “It’s not over,” she said. “We don’t die.” Only, after assuring him that what he was seeing and feeling was real, she told him to wake up. GAH! It was a big fake-out! So once again, Rick had to lead the herd to the bridge. If it collapsed under their weight, as Daryl predicted it would, he’d have saved his loved ones. Alas, to his horror, the bridge held! As his family arrived nearby and attempted to divert the herds, he signaled for his nearest and dearest not to try to save him (which naturally they ignored). But, to the bittersweet end, Rick remained determined to be the hero. When a walker knocked over a box of dynamite, he shot the explosives, sending the bridge up in flames. While Michonne and Daryl in particular reeled from the loss, the chopper arrived a ways down the river to pick up Anne. And whom should she spot on the embankment? Rick, alive and… not well but hey, alive, at least.

‘I’M GONNA SAVE YOU’ | Immediately, Anne relayed to the helicopter that she had a B, not an A, and that, while she’d been shady in the past, “its not a trick, not anymore. I’m trying to save a friend who saved me. I have something for you now. We have a deal?” And since the chopper went ahead and landed, clearly, they did. Once aboard, Anne reassured Rick that he was gonna be OK. What the whaaaat? From there, we fast-forwarded years — we could tell it was ages by how much the trees had grown from scene to scene — and joined in progress the flight of newbies Magna, Yumiko, Connie, Kelly and Luke from a bunch of walkers. Just when it started looking especially dicey for the group, a young girl’s voice called out, “Come this way — clear!” After the quintet introduced themselves, they politely asked what their rescuer’s name was. And, as the (I’m guessing) tween picked up Carl’s hat and placed it on her head, she revealed that she was Judith… Judith Grimes! So all together now: WTH?!? Rick survived… and flew away with… Anne? Hit the comments with your reaction to this big twist as well as that time jump, Carl’s absence from his dad’s subconscious and the sight of a blubbering Negan.