It took a while. OK, a long while. But just when I was thinking of starting to take a drink every time one of Fear the Walking Dead’s wandering do-gooders said, “We help people,” s— actually began happening. In the span of a single episode, Logan took over the oil field, had a total change of heart and — and this was the part we didn’t see coming — got his head blown off by a new Big Bad. And if our first impression is to be believed, she’s a Big Bad who might really deserve to be called that. Read on, and we’ll go over what happened (and try to contain our excitement over the fact that stuff, genuine stuff, happened!). 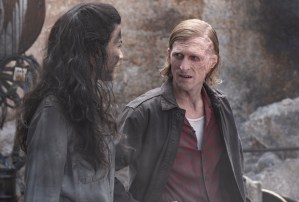 ‘WE GOT AN SOS AT THE FEEDBAG’ | “Leave What You Don’t” kicked off with a flashback to Logan in his good-Samaritan days. After trying and failing to help a young woman trapped by walkers at a truck stop, he was approached by a small group on horseback. Sadly, it was not The Walking Dead‘s Highwaymen but another bunch of equestrians. Their leader Ginny (Colby Minifie, The Marvelous Mrs. Maisel’s Ginger) offered her condolences to Logan and suggested that she wanted the same thing he did, “only bigger and better. Together, we can get from yesterday to tomorrow.” From there, we cut to the present and Logan’s arrival at the oil field. Since Luciana wasn’t about to kill him (or even take a shot around all that flammable oil), this wasn’t exactly the world’s tensest standoff. Neither was the one that took place after Sarah and Dwight arrived, and John and June took aim from the hills surrounding the oil field. “You may be a good shot,” Logan told John, “but this is one you’re not gonna take, not unless you have to.” And, of course, he was right. Then, proving that he wasn’t so bad, much less a real Big Bad, he let the kids leave so long as Lucy would cook the gas for him. Hey, I didn’t say it was a perfect episode, just way better than they’ve been recently. Stick with me here… 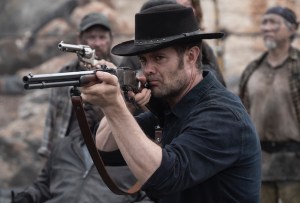 ‘YOU REALLY WANNA MAKE A DIFFERENCE? WALK AWAY’ | While all that was going on, Alicia was out painting phoenixes with Strand. Yeah, yeah, I know. Again, I didn’t say it was a perfect episode. Anyway, they soon got a call from a woman at a truck stop — a scenario exactly like the one that had hardened Logan’s heart. (What are the odds?) They even ran out of gas just like he had, and had to radio reinforcements in hopes that they could get to the damsel in distress. (Curiously, she wouldn’t reveal her name — it wasn’t safe to say, she insisted. Also curious: She was played by Holly Curran, another Mrs. Maisel cast member — she was Joel’s mistress, Penny Pann. What are the odds? And this time, I’m not asking sarcastically.) Back at the oil field, Sarah wanted to know who Logan needed all that gas for. In response, he told her his crushing truck-stop-girl story, concluding it by pointing out that Clayton hadn’t been able to save the woman in his place because Sarah and Wendell had stolen Polar Bear’s rig! So if they wanted to help people, they could forget it. “You’ve already done your part,” he growled, “and nothing you people do is going to make up for that.” Shortly, all hell began to break loose. June radioed from her perch that the smoke from the fire was drawing walkers, and splat, splat, splat, they began freefalling off of the hill onto the oil field like so many smelly, gross, person-sized raindrops. 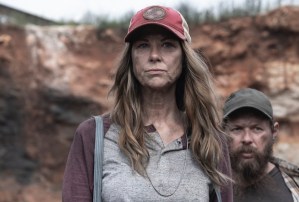 ‘YOU’RE ON YOUR OWN, SWEETHEART’ | As the blaze began burning too wildly to be controlled and walkers crawled around on broken bones, Logan’s peeps retreated. He, however, did not. They had a contract, he cried. And apparently, that contract was with someone scarier than an ankle-biting zombie. Sarah sent Dwight, Wendell and Luciana off in her rig but stayed behind, unable to abandon Logan the way she had Clayton. No sooner had Sarah and Logan made it into an office than they got a call from the woman Alicia and Strand had been headed to save. “What are the odds?” Logan didn’t say. “A situation just like the meaningful one we flashed back to at the start of the episode!” This time, he didn’t reassure the dead woman talking that help was on the way, he instructed her to pick up a gun he’d left at that very same truck stop and use its one bullet to kill herself. Then, as he heard walkers break into the Feedbag, a shot ran out. And then another and another. Wha… ? It was Wes! He’d heard Alicia on the radio and wanted to pay it forward. See? Sarah told Logan. “We help people. They help people.” (Thank God I didn’t start that drinking game. I’d have been passed out before the pretty cool ending.) Shortly, Alicia and Strand arrived at the truck stop, where they discussed phoenixes with Wes (of course they did) and learned that the woman he saved had been trying to get out of a certain scary group. Could it be… the post-apocalyptic horseback-riding club? Nooo, that would be too obvious, right? 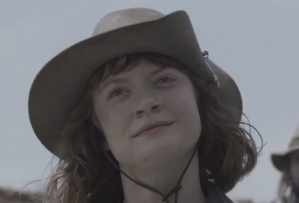 ‘THIS S—’S WORSE THAN A TEQUILA HANGOVER’ | Yeah, no, it was not too obvious for Fear TWD Season 5. Back at the oil field, Logan, his heart having grown in Grinchy fashion, had just gotten done convincing his goons to join hands and sing “Kumbaya” with their new friends when… gasp-arama! He and his people were all shot in the head by Ginny and the equestrians. What the… ? cried Lucy. “We do this kinda thing for a reason,” Ginny said, “and we don’t do it lightly, ma’am.” Please don’t make me eat my words next week, Fear TWD — but I love Ginny already. The accent. The outfit. The works. Anyway, she explained that she and her crew were like pioneers, “settling everything, everywhere.” They were doing the same thing our protagonists were, only bigger and better. And thanks to that informercial, she knew all about the do-gooders. For instance, she knew that Dwight was looking for Sherry; they could help him find her. They could act as realtors as June searched for a home. They could give the Tin Man a heart. They could… you get the idea. Unfortunately, having seen how Ginny treated people who made deals with her, they turned her down. Briefly. If they weren’t going to cook her gas, they were like Logan to Ginny — unessential. So before they all got shot, Luciana volunteered to stay behind and play oil chef. Then John, June, everybody could come back later and prove that Ginny was wrong — her way wasn’t better than theirs. “Oh honey,” Ginny drawled, “I don’t see that happening.” At the risk of repeating myself, I. Love. Ginny.

So, what did you think of “Leave What You Don’t”? Am I the only one who is hyped about the new Big Bad? Or am I just hyped because some stuff actually happened — stuff of consequence! Hit the comments with your thoughts.