A title card at the end of Wednesday’s episode paid tribute to the actor, who co-starred as Archie’s dad Fred Andrews on the CW teen drama. “In Memoriam,” it read. “Luke Perry: 1966-2019.” Perry also appeared briefly as Fred in the episode, helping to patch up Archie after he was stabbed by a homeless boy he took in. (Read our full recap here.) 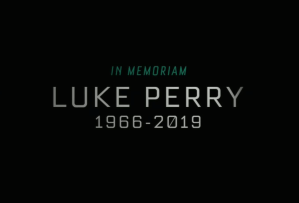 Riverdale showrunner Roberto Aguirre-Sacasa announced on Twitter earlier on Wednesday that tonight’s episode, and every episode for the rest of the series, will be dedicated to Perry, sharing an old photo of him with the cast and referring to him as “our heart, always.”

Going through pictures on my way to set. From the early days. With Luke in the middle. Our heart, always. Tonight’s episode of #Riverdale finds Fred doing what he does best–helping Archie. It is dedicated to Luke, as all episodes will be for the rest of our run. 💔❤️🏆 pic.twitter.com/Nx8iCFBoMe

Perry passed away on Monday after suffering a stroke last week; the actor, best known for playing bad boy teen Dylan McKay on the ’90s Fox drama Beverly Hills, 90210, was just 52 years old. Perry’s Riverdale and 90210 co-stars shared their grief at his sudden passing on social media, and Riverdale shut down production for several days. There’s been no word yet on how the show plans to deal with Perry’s death on-screen.