(Note: It’s tough to watch Riverdale this week without thinking of cast member Luke Perry, who passed away on Monday at the age of 52. Read our appreciation of Perry’s work as Fred Andrews here.)

Betty’s battle with The Farm got personal this week on Riverdale when they started to mess with her BFF. (Be careful, Evelyn: You don’t want to meet Dark Betty.) 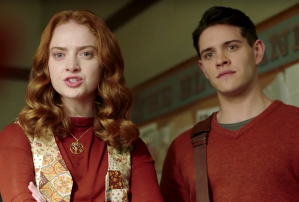 When Alice tries to sell the Cooper family home so they can join The Farm full-time, Betty does her best to sabotage it by mentioning that, you know, a serial killer used to live there. But her best friend Kevin is now a full-blown “Farmie,” too, buddying up with Evelyn and preparing to walk across hot coals to prove his dedication. Betty reaches out to him, but Kevin just calls her a “detractor” — that word again! — and tells her to back off. Betty rushes in to stop his ceremonial fire walk, but he ignores her… and makes it all the way across without so much as a mild burn.

Evelyn’s not very friendly, either: When Betty informs them she’s working on an article for the school paper that will expose The Farm, Evelyn threatens to fight back by spilling “all of your dirty secrets.” (Including the dead body she helped bury.) Back at home, Alice announces she’s sold the house to “an anonymous buyer” — are his initials E.E., perhaps? — and a defeated Betty even tries holding her hand over a flame, like Kevin did to practice for the hot-coal walk. Is she ready to say yes to The Farm? Nah, she’s actually just torching the place so no one can buy it.

Meanwhile, Jughead struggles to keep his newly expanded gang in check after former Gargoyle Kurtz picks a fight with the Pretty Poisons, loots the school’s chemistry lab and almost comes to blows with Fangs. (He won’t even recite the oath!) After a pep talk from F.P., Jughead is inspired to rally the troops… until he discovers Kurtz and another Gargoyle dangling Fangs by his feet over a ledge. Jughead catches him before he gets hurt, but now he’s had it: He outmaneuvers Kurtz by getting F.P. to deputize the Serpents and serve as paid peacekeepers around town. (Don’t worry: He’s not giving them guns.) 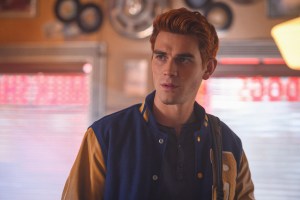 As for Archie, he finds a homeless orphan named Ricky living at the boxing gym while sweeping up the place at night. The kid tries to  run for it when he hears the words “child services”; when he was at the Santa Lucia shelter, he says, he was held down and branded by some older kids — the same brand Archie has on him, the one that means “sacrifice.” Archie lets him sleep in his garage, but loses track of him when some thugs chase him off. (The kid’s also drawn some disturbing drawings of the Gargoyle King.)

Thinking the thugs might be rogue Gargoyles, Archie and Jughead find Ricky hiding at “Gargoyle ground zero,” along with an ominous list of names that includes Archie and Ricky. Archie takes the kid under his wing, teaching him how to box and even giving the kid his letterman jacket. But there’s a twist when Archie learns from a social worker that Ricky’s real name is Ricardo De Santos — he’s Joaquin’s baby brother! Grabbing a knife, the kid reveals this was all a scam: He branded himself, he added his own name to that list and he’s here to finish the job Joaquin started. He slashes Archie before running off, leaving behind a G&G card that says “Kill the Red Paladin.”

Elsewhere in “Fire Walk With Me”: Veronica turned her bar into a full-blown casino and recruited the Pretty Poisons to serve as protection (and keep Hiram out); Gladys held court at the speakeasy and helped herself to a strong drink — she even sang! — before getting booted by the Poisons; Toni and Cheryl fought yet again about how to run their gang and seemed to be growing apart (they’re not headed towards a break-up, are they?); and Luke Perry made an all-too-brief appearance, as Fred walked in on Ricky slashing Archie and patched him up. Plus, the show added an “In Memoriam” title card at the end of the episode in Perry’s honor. Sniff.