Poor Archie took a few more shots to the ol’ noggin in the boxing ring this week on Riverdale… and did Betty’s mom finally buy The Farm?

Archie’s been sweating out all of his teenage angst by taking up boxing, with Tom Keller serving as his coach and mentor. He’s eager to get his first real fight under his belt, so when Elio comes looking for a fighter to take on his champion Randy Ronson, though, Archie eagerly volunteers. But Elio also wants Archie to lose, offering him five grand to throw the fight and paying him half in advance on the spot. (So Elio just casually carries around $2,500 in cash at all times? OK, then!) 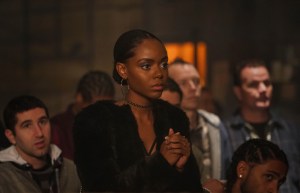 Archie sees taking a dive as a necessary step in his boxing career, but after a pep talk from his new sweetheart Josie, and a heart-to-heart with Mr. Keller, he decides to fight Ronson for real, handing Elio his dirty money back. He trains hard with Keller before stepping into the ring with the more experienced Ronson, getting absolutely pummeled at first. (No, not his beautiful face!) Archie rallies to make a fight of it, but ultimately loses on a split decision, Rocky-style. He’s encouraged by the result, though, and takes Josie up to his attic for some celebratory lovin’ afterwards. But maybe he should’ve kept Elio’s cash, since he lost anyway? 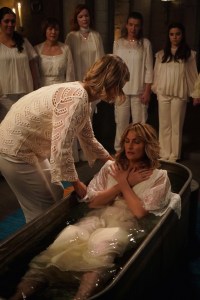 LOST IN FARMVILLE | Alice informs Betty that she’s undergoing an official baptism ceremony for The Farm — in her wedding dress, no less. But Betty is still suspicious, especially after she learns her mom has signed a release that clears The Farm “in case of bodily harm or death.” (Polly sniffs that she’s just being “a detractor.”) Betty’s fears shift into overdrive when she tracks down a former Farm member whose sister died… during her baptism ceremony: “If you can get close enough to death, you can see the truth,” they were told. (Yikes.) Betty bursts into the baptism to find Polly holding a thrashing Alice under the water and yanks her out, performing CPR to save her mom’s life. But Alice seems to have enjoyed her near-death experience: “I was reborn.” In fact, she’s selling the Cooper family home… so they can all live together on The Farm. Yay?

* Man, Gladys really took care of business this week: recruiting Veronica to spy on her dad Hiram; striking a deal with Hiram to take over the town’s Fizzle Rocks business; bringing in a bunch of ex-Ghoulies to fill out Jughead’s thinning Serpent ranks. And she even found time to make breakfast! 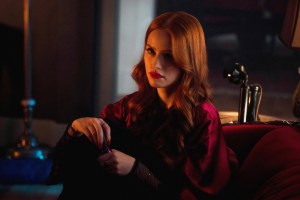 * Cheryl and Toni’s new gang the Pretty Poisons is growing fast… at the expense of the Serpents’ female population. But Cheryl annoyed Toni (again) by ordering some of the Poisons to rough up Fangs and Sweet Pea in an effort to send the Serpents a message. Stick to the archery lessons, Cheryl.

* Now Hiram knows that Hermione made a payment to the governor right around the time he was shot. Veronica took the blame for torching the Fizzle Rocks supply and equipment… but isn’t Hermione still in serious danger here?

* Did you notice ex-Farmer Martha used the word “ascend” in her conversation with Betty? Hmmm… sounds awfully G&G-y to me. Is it possible that this season’s Gargoyle King mystery and this season’s The Farm mystery… are really the same mystery? Could Edgar Evernever be the real Gargoyle King?

* Speaking of Edgar: Betty couldn’t find a photo of him anywhere… but we can! One Tree Hill alum Chad Michael Murray will play The Farm’s mysterious leader later this season. He seems a little young to be Evelyn’s father, but hey, it’s Riverdale. We’ll let it slide.

* Where was Fred this week? I can understand if he couldn’t help train Archie in the boxing ring, but he didn’t even show up for his son’s first official fight?

* Was it just me, or was Josie’s take on Tina Turner’s “We Don’t Need Another Hero” her best performance yet? All she needed was the vintage ’80s Tina wig.