Hold onto those celebratory cigars: A Million Little Things‘ Season 1 finale offers up many developments for the Friends of Jon, but a new baby isn’t one of them. 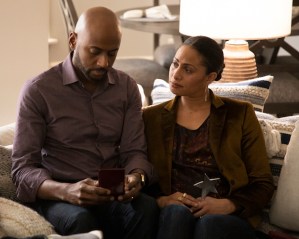 Which isn’t to say that Delilah doesn’t go into labor during the hour — her water breaks, and her labor coach/bestie Regina is right there to help her through. But the episode goes to black before we see the child come into the world. On a related note: Even though Rome comes to the decision over the hour that he does want children, his wife makes it perfectly clear as they arrive at the hospital that she still does not. Ouch.

Where’s the ashamed papa-to-be Eddie during all of this, you wonder? After rekindling a spark with Katherine and deciding not to go through with their divorce, he realizes that he and Theo’s mom cannot restart their marriage with any secrets or lies between them. So a very grave-looking Eddie reiterates that he wants to come home, but “there’s something I need to tell you.” He’s got to be talking about fathering Delilah’s baby… right? (More on that in a moment.)

Elsewhere, Maggie’s doctor tells her that her cancer is gone, news that sparks tears for Gary and a bout of maniacal laughing for Mags. Later, as she moves into Gary’s place, Maggie notes that his need to take care of everyone parallel’s Jon’s, and then accompanies him to Jon’s grave for the goodbye the two friends never got. 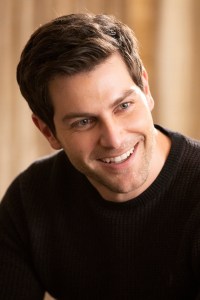 Which brings us to Jon. Earlier in the finale, Delilah is ready to let the whole Barbara Morgan mystery go, but Sophie says the new baby might want answers someday. So Delilah returns to the house she and Gary previous visited, and it turns out that the woman who we thought was Barbara actually is Barbara. She reveals that she dated Jon’s roommate, Dave, and then shows Delilah the video Jon sent her the day he died. Between that sad message and a flashback, we learn that Jon and Dave both had tickets for American Airlines Flight 11 leaving Boston’s Logan Airport on Sept. 11, 2001, but that Jon just missed the flight because he ran to an airport shop for some wine. That flight, of course, was one of two that terrorists used to take down the World Trade Center towers.

Jon’s survivor’s guilt only grew in the time after the attacks, and he stopped speaking to Barbara after learning that she was pregnant and was planning to wed a firefighter she met after Dave’s death. Delilah never knew any of this; we see a flashback to when she and Jon met, coincidentally at Logan, just moments after he’d yelled at Barbara for moving on too soon. When Delilah tells her friends what she’s learned, Maggie points out that it was likely the totality of Jon’s issues — including his financial problems and his guilt/grief over Dave — that led him to choose to end his life.

Oh, and one more thing? PJ, the teen we met at the hospital last episode, is Barbara’s son that Mitch (her angry husband) raised as his own. But we have a pretty good feeling the story doesn’t end there. Read on for series creator DJ Nash’s thoughts on the finale and what it means for Season 2.

TVLINE | I have to tell you, I fell for your trickery. When you and I spoke after the fall finale, you said that we’d say goodbye to a member of the cast before the end of the season. So I spent this entire episode worried that Maggie was going to die. But then I realized you were probably talking about Ashley, who’s already gone to Spain. Is that right?
The conversation you and I had caused an online frenzy. Many read [into it] what you did. I was talking about Ashley, and I think when we talked, it was before [Episode] 13 had aired. So I was factually correct. I would never lie to the fans. I would never lie in general. And then they took your article — you should know, it created a s–tstorm. It was incredible. 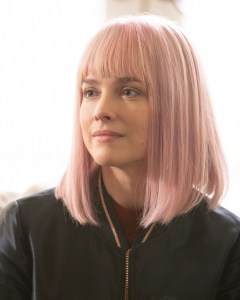 TVLINE | I’m sorry.
People just were so sure that [Maggie] was going to pass, and you know what it speaks to? It speaks to the fact that probably every single person lost someone to cancer, and you wish you could rewrite that ending… Maggie is based on my aunt who I did lose, and I got to rewrite that ending.

There are shows like Game of Thrones, and there’s shows like House of Cards that make you think that even if someone is an important series regular, you may lose them. But I will say Allison [Miller] and James [Roday], there’s no way I was going to do that right from the beginning. I knew I struck gold. I wasn’t going to give up my gold.

TVLINE | The episode makes a point that there are reasons, plural, behind Jon’s suicide — not one smoking gun of an answer. Talk to me about why it was important to include that discussion.
There’s a writer in our room this year who lost her brother, and it may have been to suicide or it may have been an accident, and to this day, she doesn’t know. And so that part of it we really wanted to capture and make sure that even though we were telling a story of “This is probably the day he broke,” this wasn’t the last straw. Was the last straw Eddie and Delilah? Was the last straw the buildings? Was the last straw the feeling that he didn’t feel like he deserved to live anymore? We just won’t know that straw.

…Every one of these stories we’re telling about depression, suicide, or cancer or now September 11, there are real people who have experienced these things and a lot of them watch our show and respond and feel heard. I just want to make sure we get it right, so we did a lot of things to make sure we got it right… Like, we went to Logan [International Airport] and we took pictures of that gate to make sure we got the look of the gate right. 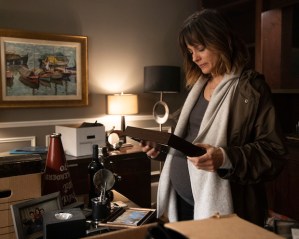 TVLINE | Was the Sept. 11 angle always part of Jon’s backstory? If not, when did that come in?
Great question. So, when I gave Channing [Dungey, then-ABC Entertainment president] the first draft of the pilot script, she had a wonderful note, a brilliant note, which was, “Can we evoke Jon and his optimism at the end of the pilot?” From that, I thought of three choices. One choice was what I went with, which is to have the video of Jon from elevator… The other choice was to have it be a flashback to the guys going to Game 7 of the Stanley Cup and not making their flight. And then the last thought I had was, “Oh, what if all the guys were supposed to get on Flight 11 and didn’t?” I thought that was a really cool idea. I talked to [executive producer] Dana Honor… and she was like, “I love that, but wouldn’t have that been in the eulogy? Wouldn’t that have come up at the funeral?” And I’m like, “Oh, of course, of course.” So I just held off… but it was always there in my mind.

TVLINE | We’re getting short on time, but I want to talk about PJ. PJ is Dave’s son, that’s correct?
[A very long silence] PJ is Barbara’s son.

TVLINE | At the end of the episode, we see him watching the video of Jon. The impression it left with me was that maybe he was questioning what he’d been told his entire life, perhaps thinking that Jon could be his father. What can you say about that?
What I can say is that we definitely will look at this next season. I will also say that what has been most rewarding for me about this show is setting up more than one character with a similar thematic struggle. So, for instance, in this finale, you realize that Jon had survivor’s guilt. That’s also what Gary has as he stands at the cemetery. It’s also what Maggie has, because she beats cancer and Linda didn’t. It’s also something that Rome has, because if that phone call about Jon hadn’t come through, he’d be dead. So, there is a survivor’s guilt that carries through, and it will carry through the second season for sure.

TVLINE | We know there will be a new mystery for Season 2. Are there scenes moving toward that mystery in the finale? Or will it be something completely new?
The seeds would have already been planted. It’s not like, “This just in!” It is built on story we’ve already set up. So, just by example, PJ was not a new character in the finale. He was in Episode 16, him walking past the hospital and what brought him to the hospital and why he’s there will also be part of Season 2.

TVLINE | Okay. Is there any chance that this secret that Eddie is telling Katherine at the end is not the secret that we think it is?
Well, I mean, if you’ve watched 17 episodes, yeah. [Laughs] I will say: I’ve already shot this scene, the rest of the scene. When we there, even though at that point didn’t know we had a second season, I knew I had actors who are amazing. I took them aside the morning of, and I said, “We’re going to shoot this.” And they did a beautiful job, a really beautiful job.