“I’m not the man everyone thinks I am,” A Million Little Things‘ Jon told Ashley in a flashback at the end of Wednesday’s fall finale, just before the pair kissed. Could it be that the family man and business mogul contained even more mysteries than we’d previously guessed?

Definitely, series creator DJ Nash tells TVLine. And what’s more: “Everybody in this group of friends has a secret that they have kept,” he adds. Some, like Eddie and Delilah’s affair, have been revealed. But others, Nash promises, will be exposed by the end of the season.

Before the EP breaks down the big episode, a brief recap of “Christmas Wishlist”: 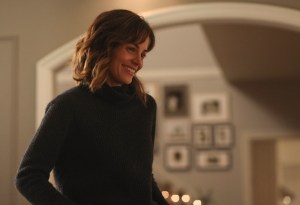 * Delilah fell while the gang was helping her and the kids pick out a Christmas tree. When she later started bleeding, she thought she was losing the baby. (She wasn’t.) Sophie tracked her mom to the hospital and figured out what was going on, but she was happy to learn that she and Danny were going to have another sibling. Delilah refrained from telling her daughter that the kid was Eddie’s.

* Delilah also got served with papers saying she was losing her house and had to vacate in 21 days. She was confused, because she and Jon paid off the property years before. In her despair, she reached out to Katherine, a real estate lawyer, for help.

* Maggie learned Gary had slept with Ashley “because I’m in love with you!” he shouted at her during an argument. Before Maggie could respond, she vomited on him. He realized that she’d changed her mind and started chemotherapy. They kissed, and he later accompanied her to treatment.

* Everyone saw Eddie off as he left for the Red Ferns’ tour. “Please don’t drink,” Katherine asked him.

* Rome announced his intentions to get off his anti-depressants.

Read on as Nash tells us exactly when we’ll find out who Barbara Morgan is, how the group might react to finding out Eddie fathered Delilah’s kid — and why you shouldn’t expect all of Jon’s friends and family to be around by the end of the season. (Wait, what?!) 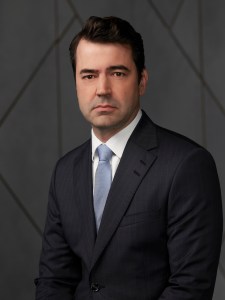 TVLINE | When we see Ashley and Jon kiss at the end of the episode, is that the first time this is happening? What can you tell me?
At the end of that episode, there was a certain amount of speculation as to what’s going with Ashley and Jon, and we certainly are teeing it up like something happened that night, which is the night before he takes his life, which we assume will be featured in a future episode. And we’ll catch up with all of them on what was going on for them the day before the entire episode. It leads up to the moments you see in the cold open in the pilot, so that story of what’s happening and where they are and what’s going on, all of that comes up in a couple more episodes.

TVLINE | How soon after we pick up again in the new year will we get more information about Barbara Morgan and the part she plays in all of this?
Right away. You know, it’s interesting, I’m new to drama, right? [Editor’s note: Nash executive-produced Up All Night and Growing Up Fisher, and has worked on multiple other comedies.] I come from the half-hour world. I don’t like to hold back on stuff. The expression we use with ABC is: You want a bagel, not bread crumbs. So there’s stuff coming. The mystery of who she is and her relationship to Jon and this group plays out for the remainder of the season and will carry us into the second season. You will find out by the end of the first season who she is and what role she plays in Jon’s life. There’s a lot of speculation that Barbara Morgan is Constance Zimmer, too.

TVLINE | Uh, yeah.
A lot of speculation. Why would you put someone just in one scene in the pilot and not have her come back?

TVLINE | How might the group react when it inevitably finds out that Delilah and Eddie have been keeping a second deception from them?
Oh, amazing question. You, obviously, are referring to the secret of whose baby it is?

TVLINE | Exactly.
Okay. So, I just want to make sure my secrets are straight. It’s like a deposition: You only answer the questions you’ve been asked. [Laughs] So, with that question, what’s motivating Delilah and Eddie to keep this secret or to tell this lie or to tell this version of the truth, however you want to categorize it, is their affair hurt so many people. They worry that it hurt Jon, they know that it hurt Katherine, and they know that if it came out would hurt Danny, Theo, and Sophie… They want to protect those people. So the act of deception, whether you agree with it or not, is one that is selfless, not selfish. They’re doing this to spare the pain of the other people, and that will be challenged.

Obviously, when this baby arrives, it’s even more real. We have upcoming episodes where there’s things that are happening like setting up the baby room, putting in the carseat. There are going to be challenges where that becomes more and more difficult. And I will say, in the most cryptic way, Barbara Morgan’s introduction into the group will only complicate this further.

…Every single person has a secret. Some of them we know already: that Rome tried to take his life, that Jon was in financial trouble. While we know that Jon was in financial trouble, that is not the reason he took his life. I want to make sure we’re being fair and authentic to telling the stories for other families who have lost a loved one to suicide. 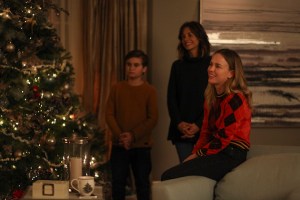 TVLINE | I want to talk about Maggie and Gary. First, and this is in no way the most important thing, he must truly love her to kiss her on the mouth after she pukes in his lap. Second, is there a honeymoon period for them at all, now that they’re on the same page about her treatment?
Great question. First thing, just to go back to the vomit-kiss scene… I have 11 writers who are an incredible staff. I’ve never been in a room like this. They all said this scene wouldn’t work. [Laughs] We were really funny about it, because we had written an alt-version just in case it didn’t work… When we saw the cut, from director’s cut to air, I don’t think a frame of that scene changed.

The actor, Allison [Miller], who plays Maggie — I told her this yesterday. I said, “When I wake up at 5 am and have to watch a cut… there’s always a point where I just well up with tears at how you’re playing the humanity of Maggie.” It’s truly beautiful. I have lost many family members and a few friends to cancer, and the journey that Gary and Maggie go on ends in heartbreak. 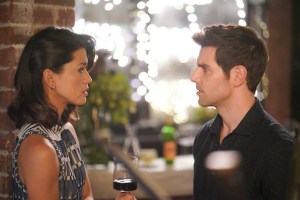 TVLINE | Eddie is going on tour. That seems risky, given his past addiction.
The thing I’ll say about it is, you know that moment where [Katherine] hugs him and says, “Please don’t drink?” … In my mind, there’s just a little hope that that marriage is still alive. So I really wanted to capture that. For Eddie, going back on the road and trying to reclaim something that he lost, it’s going to be a great journey for Eddie and for [David] Giuntoli, who plays Eddie…

Each of them have a journey that we map out at the beginning of the year, and his journey is going from boy to man. For Gary, his journey was going from playing the odds as an actuary to trying to beat the odds with Maggie. But them has a journey, and we will see them play out this season in that way. One other teaser, I will say, is someone that we mentioned in this [interview], we say goodbye to them this year.