Now that they’ve wrapped their fall runs, let’s see how each network’s shows are stacking up thus far for the 2018-19 season, closing things out with Fox.

Listed below is the average Live+Same Day DEMO RATING for each series on Fox. Beside that is the PERCENT CHANGE versus each program’s previous full-season average (or its time slot predecessor’s performance, if indicated among NOTES). Each program’s RANK refers to the most critical measure — how it is faring compared to other shows on Fox, since come springtime heads must roll to make room for shiny-and-new pilots.

THE TVLINE BOTTOM LINE: Inching ever closer to its post-Disney deal future, Fox has made some smart moves with current programming. The ever-aging Sunday slate is holding steady (though working a live-action comedy into the mix remains a nut to crack), as is Wednesday’s Empire/Star combo. Thanks in large part to 9-1-1, Monday is up year-over-year; the acquisition of Thursday Night Football quadrupled Gotham and The Orville‘s Fall 2017 averages; and reviving Last Man Standing fueled a Friday-night improvement. Tuesday, though, is tanking, with both The Gifted and the embattled Lethal Weapon down sharply from their previous seasons and barely on par with any of the far-less-expensive sitcoms they replaced.

Which ranking or percent change most surprises you? (Review the midseason report cards for ABC, CBS, NBC and The CW.) 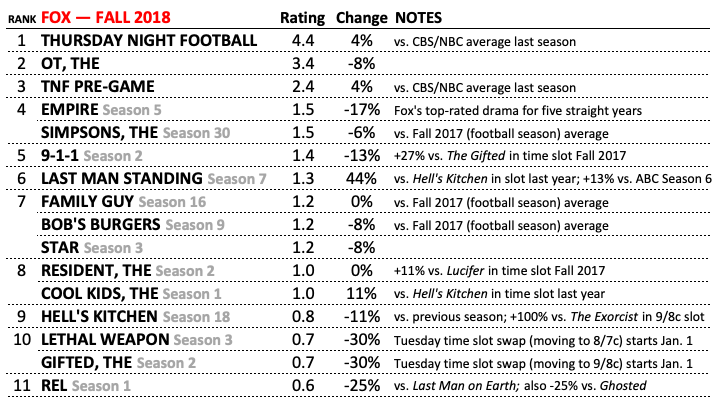