Now that they have completed their fall runs, let’s see how each network’s shows are stacking up thus far for the 2018-19 TV season, next turning our attention to NBC.

Listed below is the average Live+Same Day DEMO RATING for each NBC series. Beside that is the PERCENT CHANGE versus each program’s previous full-season average (or its time slot predecessor’s performance, if indicated among NOTES). Each program’s RANK refers to the most critical measure — how it is faring compared to other shows on NBC, since come springtime heads must roll to make room for shiny-and-new pilots.

THE TVLINE BOTTOM LINE: Yes, This Is Us has slipped in Season 3, but it easily remains TV’s top-rated drama. Both Manifest (the fall’s No. 1 new drama) and New Amsterdam mark solid improvements over their year-ago time slots, while bundling #OneChicago on one night was a top-to-bottom success — even though it sorta put 20-year-old SVU out to pasture. But Thursday as a whole has been a bit of a hole for the Peacock, with critically lauded but modestly rated comedies leading into a waning Will & Grace (read those Notes!) and one Bad freshman.

Which ranking or percent change most surprises you? (Review the report cards for ABC and CBS.) 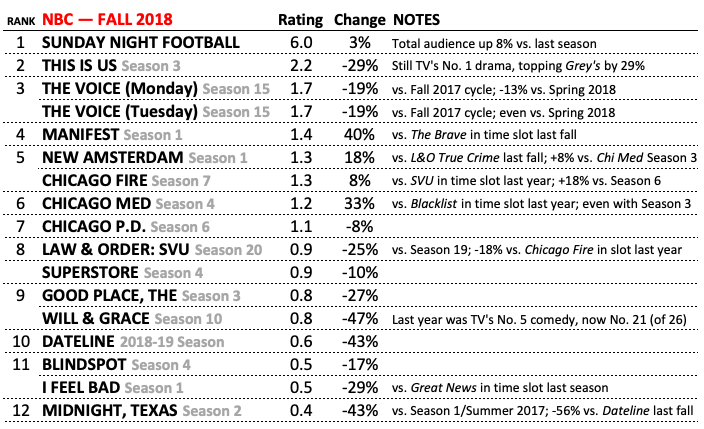