Question: Is there any chance April might come back to Grey’s Anatomy now that Jackson’s all religious? —Michele
Ausiello: “Never say never,” teases showrunner Krista Vernoff, hastening to add, “That’s what I said when people asked me if I was coming back to Grey’s when I left Season 7. I said, ‘Never say never,’ and look” — years later, she returned. But despite that (and despite Sarah Drew’s availability to guest-star, since her Cagney & Lacey reboot wasn’t picked up by CBS), “I’m not promising anything for this season,” Vernoff clarifies. “But at Shondaland, those doors are open.”

Question: Can you give us any scoop about Levi and Nico’s possible romance in Season 15 of Grey’s Anatomy? —Eduardo
Ausiello: I think we can safely drop the “possible” from your question. Showrunner Krista Vernoff confirmed to our sister site Deadline that Nico, the new gay surgeon played by Alex Landi, “has a beautiful love story coming up this season.” And although Vernoff did not specify “Glasses” as the object of his affection, we feel pretty comfortable doing so. 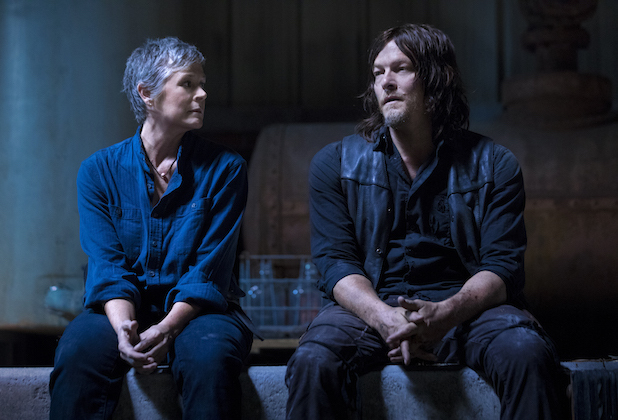 Question: The Walking Dead, please. —Cal
Ausiello: Sunday’s Season 9 premiere (AMC, 9/8c) not only includes a scene that’s all but a Valentine to Daryl/Carol shippers, it brings to the fore a more formidable Maggie than we’ve ever seen. Something tells me you’re going to like this iteration of the character, too.

Question: Any clues or hints about what’s to come for The Flash Season 5? —Nathaniel
Ausiello: In showrunner Todd Helbing’s dream world, we’ll get a double dip of CGI-heavy villains. “We’re going to do everything we can to get King Shark and Grodd in the same episode, whether they’re fighting each other or the team,” he says. “That will be a lot of fun.” One baddie the CW series probably won’t get an encore from, however, is the original Trickster. “We always want to get Mark Hamill back, but my brother [Aaron Helbing] stole him for [History’]s Knightfall,” the EP laments. “We’ll see what happens. We may to have to arm wrestle for him!”

Question: Anything on Schitt’s Creek’s upcoming holiday episode? —Bryann
Ausiello: “We ran with the tropes of what you would want from a Christmas episode,” EP and star Dan Levy told us earlier this year of the Dec. 19 outing, which Levy co-directed. “As a writing team, we tried to create a classic, standalone Christmas episode that fans of the holiday-special genre will like.” Levy also confirmed that the episode will feature flashbacks to the Roses’ holidays of yore, pre-bankruptcy. “I think we [need] to see what their Christmas parties looked like,” he teased.

Question: What was Constance Zimmer doing in the Million Little Things premiere? She popped up at the funeral and barely had a line. —Becky
Ausiello: We had the same question, especially since the UnREAL star wasn’t in the original, pre-Grace Park pilot at all. ABC is being secretive about who Zimmer plays in the grand scheme of things, and will only confirm that she will be seen again as Season 1 unfolds. 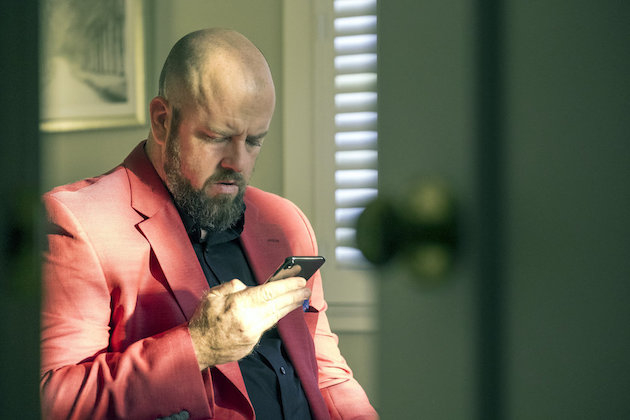 Question: How soon will we start to see the effects of Toby not taking his anti-depressants on This Is Us? —Angela
Ausiello: “Pretty quickly,” co-showrunner Isaac Aptaker says. “We’re consulting with a lot of people about what it’s like to go cold turkey off your anti-depressants like that, and it’s a scary choice.” Adds co-showrunner Elizabeth Berger, “Toby also really wants to be Kate’s rock, so he’s going to do what he can to keep it from her. But he can only do that for so long.”

Question: Got any Riverdale scoop? —Marie
Ausiello: Is this Pop’s Chock’lit Shoppe? Because I’m giving you exactly what you ordered. Next week’s jam-packed Season 3 premiere includes all of the following: (1) the conclusion of Archie’s murder trial — although maybe not the one you’re expecting, (2) an intriguing new romantic pairing among the high school kids, (3) at least three shots of Archie without a shirt on, and (4) a shocking scene that puts one main character’s life and health in serious jeopardy.

Question: More NCIS scoop, please! —Marcie
Ausiello: If the season premiere left you thinking you missed out on forensic whiz Kasie’s formal addition to the NCIS team, fear not — that moment hasn’t happened, yet. “For the first couple episodes, she’s there on a temporary basis,” says showrunner Frank Cardea. “It isn’t until, like, Episode 5 that she officially becomes the new forensic scientist.” Surveying Diona Reasonover’s promotion to series regular in the wake of series vet Pauley Perrette’s send-off, the EP notes, “Both on- and off- camera, she already fits like an old shoe.” 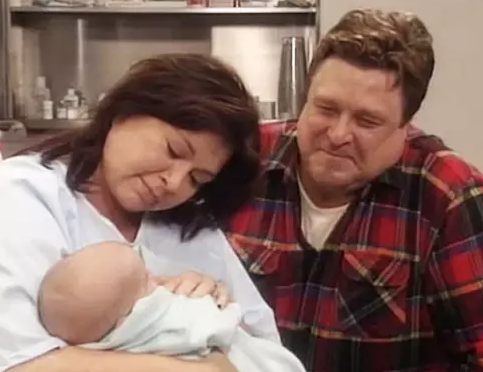 Question: Any scoop about The Conners? I am curious about if we will meet Jerry or Andy in the spinoff. —Ethan
Ausiello: The series’ forgotten… will continue to be MIA. “We’ve acknowledged that Jerry is off on a boat,” showrunner Bruce Helford notes of Roseanne and Dan’s youngest kid. (You’d think he’d at least make an appearance at his mom’s funeral!) And with regard to Jackie and Fred’s son, Helford says, “We debated whether Andy was part of the ‘dream period’ or whether he existed. He’d probably be off at college if he does exist.”

Question: Do you know if Adam’s case will be wrapped up quickly in Hawaii Five-0 Season 9? —Belle
Ausiello: It won’t be wrapped up that quickly, if only because Ian Anthony Dale was busy filming Salvation Season 2 and thus won’t physically return to Five-0 until the Nov. 2 episode. That being said, show boss Peter M. Lenkov assures that Adam’s story will remain an ongoing thread even in the character’s absence.

Question: Considering she’s a main Suits character now, I feel like we haven’t gotten much on Katrina. Any insight as to what she’s up to? —Lindsey
Ausiello: When Season 8 resumes, it sounds like Katrina will be semi-patiently waiting for Brian to get a clue that she likes him, you know, that way. “We’re working out how we want to reveal what he’s aware of and what he isn’t,” executive producer Aaron Korsh says. “But there comes a time when it’s clear that he knows what’s going on. It’s going to build to a head, and they’re going to have to figure out what to do about it.”

Question: Please tell me Elementary has a chance at renewal. I really want to see more of their adventures in their new location! —Brian
Ausiello: Brian, I have good news and I have bad news. The good news is that Elementary was renewed for Season 7 back in May, so you will absolutely get a chance to see Sherlock and Joan raise bloody hell across the pond. The bad news is that Elementary was renewed for Season 7 back in May and, here you are five months later, asking about Elementary‘s renewal status. Where have you been?! Speaking of bad news, although Sherlock expressed interest in a woman this past season, romance will not be on the PI’s mind when the show returns next year. “It was something we wanted to explore, but then the way the bottom falls out for Sherlock and Joan in the finale, I think he had a lot of different plans on different fronts that had to go away, or at least have pins stuck in them,” showrunner Rob Doherty explains. “The move to London will change quite a bit for him.” As for the team back in NYC, Detective Bell — who had applied to be a U.S. Marshal — “will be on a certain path as the seventh season starts, and by the end of the first episode, a lot will change for everybody.” 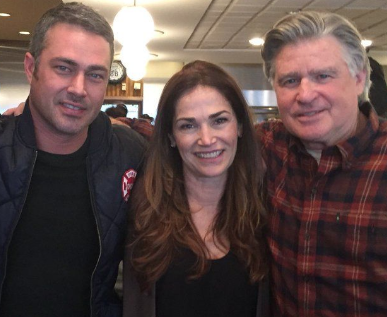 Question: Anything on Chicago Fire? —Jesse
Ausiello: If scheduling allows, showrunner Derek Haas plans to not only bring back Severide’s father and mother (played by Treat Williams and Kim Delaney), but also the firefighter’s half-sister Katie (Brittany Curran), who last appeared on the show in 2014. “We’re doing that dance with casting and her schedule on The Magicians,” Haas says. “But I talked to Brittany — she wants to do it. We’re really hoping that it will work out. She’s in the script.”

This AAnd That…
♦ CHICAGO FIRE: You know how there hasn’t been a LGBTQ character on Fire since Shay died in the Season 3 premiere? I hear that’s about to change.
♦ BLINDSPOT: The Season 4 premiere (airing Friday, Oct. 12) will deal a major blow to the girl-power team-up of Zapata and Blake Crawford. (Hint: Alcohol is involved.)
♦ BLIND ITEM CLUE: It’s not The Crown.
♦ TUBE TALK: The latest episode of TVLine’s underground interview series — featuring Crazy Ex-Girlfriend‘s Rachel Bloom — just debuted and it’s embedded below for your viewing pleasure. Warning: If mild-to-moderate spoilers about Crazy Ex‘s final season and/or subway acrobatics freak you out, avoid it at all costs.