Question: Any spoilers for the coming season of Grey‘s Anatomy? —Josephine
Ausiello: In case there was any doubt, the father of Teddy’s unborn oven bun is definitely Owen. As Kim Raver notes, the finale twist was foreshadowed in Season 14’s 17th episode, which allowed “the audience to understand the love relationship that… [Teddy] and Owen have.” But Raver is quick to remind us that the pair’s road to parenthood will be paved with at least one massive landmine. “It will be complicated because of Owen and Amelia!” the actress exclaims, before teasing that there will also be some “fun stories to tell within that [triangle] story… What I love about how [Teddy] is coming back again is it’s complex. Life is not simple, and that’s the fun of Grey’s.”

Question: Have we seen the last of Melina Kanakaredes’ evil MD on The Resident? I hope not. I hate her but I kinda like her, too. —Kevin
Ausiello: The now-disgraced and incarcerated oncologist will, in fact, appear in the Sept. 18 premiere — presumably rotting away in prison. “I don’t know if she’s rotting,” EP Todd Harthan hedges. “But I can say that [Bruce Greenwood’s Dr. Bell] has a moment with her. You definitely have not seen the last of her.” 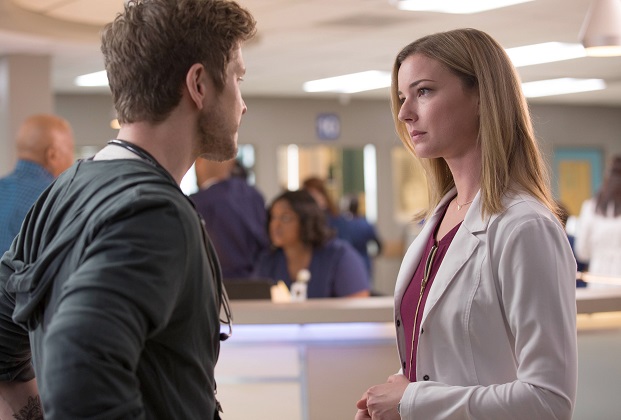 Question: Got any spoilers you can share about The Resident‘s Conrad and Nic? —Jennifer
Ausiello: Season 2 picks up one full week into the former lovers’ rekindled romance “and we get to see the good and bad,” star Matt Czuchry previews. “We’ll find out what broke them up [initially], and that reveals certain things about Conrad and about Nic. They’re giving it a go, but it’s a bit of a rocky road because of their past.”

Question: Any hints about how Animal Kingdom is going to end the season? — Bo
Ausiello: From what Shawn Hatosy recently told TVLine, it’s gonna be messy as hell. Tuesday’s episode of the TNT drama (9/8c) — which also marks his directorial debut — “is like the end of a marathon,” he said. So the final two installments of Season 3 are “kind of the beginning of the next chapter.” In them, although the actor acknowledged that “we need to address the Lena situation,” Pope might have an especially hard time getting custody of the little girl now that his own mother is out of prison. “With Smurf in his life again, he’s going to be back on his bulls— a little bit,” he warned before adding with a laugh, “which I think is something Animal Kingdom fans have been waiting for.” 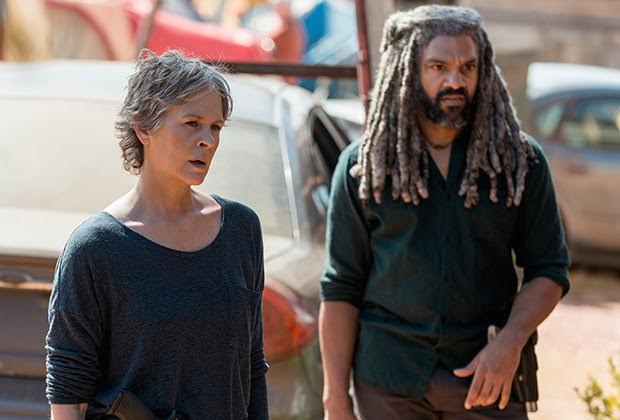 Question: Walking Dead spoilers, please! — James
Ausiello: Those of you who have wondered whether Ezekiel and Carol’s feelings go beyond friendship may get your answer in Season 9 (premiering Sunday, Oct. 7). When TVLive recently spoke with new showrunner Angela Kang, she promised, “We’ll be seeing more of their relationship,” and added that, post-18-month time jump, “There are things happening at the Kingdom.” Things… such as Ezekiel dropping his regal manner of speaking, perhaps? Kang wouldn’t say for sure but hinted that he, “like all our characters, evolves.”

Question: Got anything on Fear the Walking Dead? — Ken
Ausiello: Remember when Lennie James (Morgan) told me at Comic-Con that walkers fly when Season 4B’s big storm hits? You won’t have to wait long to get an eyeful of that particular spectacle after the AMC drama returns on Sunday, Aug. 12. The back half also promises to present to John and Laura/Naomi/June a challenge as daunting as dispatching a horde of walkers: maintaining an actual relationship.

Question: Will Eddie the Dog be in more episodes of Hawaii Five-0? —Lady Di
Ausiello: Not only is Eddie back for Season 9 — which will celebrate the franchise’s 50th anniversary by redoing the original Five-0‘s September 1968 pilot — but “we get to know his backstory” in a –centric episode, Peter M. Lenkov told us.

Question: Scoop on Supernatural? —Susan
Ausiello: “There’s a brewing Bobby/Mary relationship that we want to explore,” co-showrunner Robert Singer tells us. And how will Dean and Sam feel about a potential romance between their mom and their surrogate father’s doppelganger? “I think the boys would be on board with this,” Singer says. “They love [Mary] and like [Bobby] a lot. And if it would make their mom happy, they’d go for that. But this Bobby is a little more complicated of a character in what he’s seen and done, and that can be a roadblock in the relationship.” 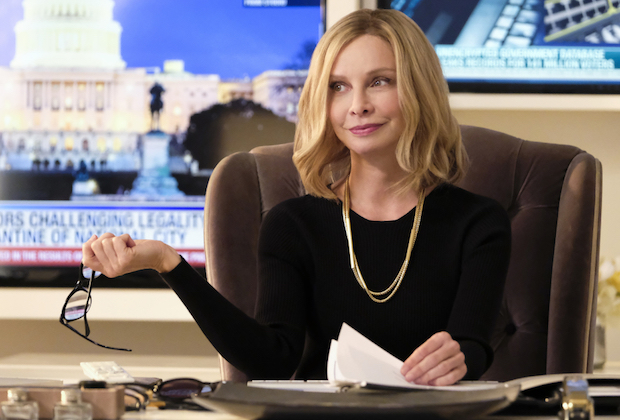 Question: Any word on if Calista Flockhart will be making an appearance in Season 4 of Supergirl (hopefully for longer than 30 seconds this time)? —Avery
Ausiello: As of now, I’m told there are no current plans for Flockhart to slip back into Cat’s designer heels.

Question: Anything on Prison Break Season 6? —AGX
Ausiello: “It continues to be in development,” Fox CEO Gary Newman told TVLine at TCA. “It’s still fairly on — we haven’t seen a script yet — but we know Paul [Scheuring] is working on something. It could [still happen], but it’s still early in the process.”

Question: Will Black Lightning take part in this year’s Arrowverse crossover event, given that the show airs this fall, or will they still keep it separate from the other four? —Dax
Ausiello: CW president Mark Pedowitz told Matt Mitovich at TCA, “At this time, no,” there aren’t any plans for Black Lightning to formally join the Arrowverse (despite having name-checked the likes of Supergirl and Vixen). “It’s really [showrunner] Salim [Akil]’s call — if he wants to do it, we’ll be glad to have that discussion.” Pedowitz went on to hype Black Lightning‘s Season 2 opener, saying, “It’s as socially relevant as it was last year, if not more so.”

Question: Is The 100‘s upcoming sixth season going to be its last? —Dennis
Ausiello: “I doubt it, actually,” CW president Mark Pedowitz shared Monday at TCA. “Jason [Rothenberg] has done a remarkable job of revitalizing the show, and I hope it can go on for a long time.” But if it does wind up being the end, “We’re pretty good at people giving people enough time to wrap up their shows,” Pedowitz noted.

Question: Anything you can tease about Archie’s murder trial on Riverdale? —Danielle
Ausiello: You won’t have to wait long to get a verdict: Season 3 kicks off with “the trial of Archie, and then we see the results of that trial really quickly,” showrunner Roberto Aguirre-Sacasa promises. “We’ll find out his fate in Episode 1.” And while the results of that trial “might pose a threat” to Archie’s relationship with Veronica, the couple “is proving more resilient than [we] originally thought,” the EP admits. “Their attraction is pretty epic.”

Question: I’m on the fence about Crazy Ex-Girlfriend “reimagining” the role of Greg with Skylar Astin. I loved he character’s original portrayer Santino Fontana. Was he too busy to return? —Cindy
Ausiello: In a word, yes. “We wrote Santino off the show because he voluntarily left, and now he’s going to be in Tootsie on Broadway,” leading lady and EP Rachel Bloom explained Monday at TCA. As a result, “We had this really unique opportunity to bring back this almost mythic figure and look at [him] from a different angle and write [him] in a unique way.” Bloom, meanwhile, insisted that Greg’s facelift will not go unrecognized by her title character. “Rebecca will notice it… and call it out,” she revealed. “We are not going to pretend that this [is the same] person. It’s not a Becky-on-Roseanne situation where, suddenly, it’s a different person.” 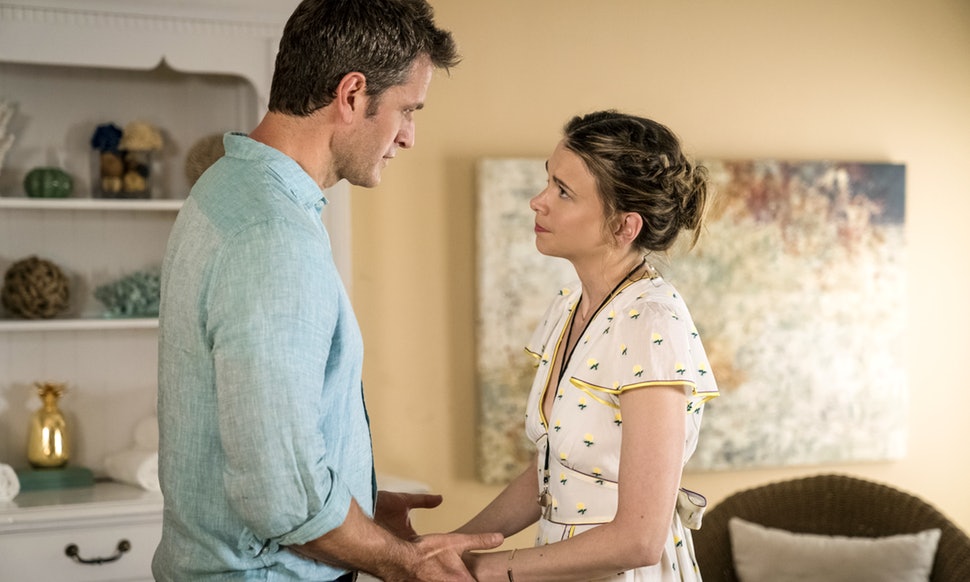 Question: I know Younger well enough to know that Charles and Liza can’t last. Am I right to be worried? —Kate
Ausiello: Considering the premise of this show, it’s never a bad idea to worry about Liza. And someone will indeed try to penetrate Charles and Liza’s bubble before season’s end — but it might not be who you’re expecting.

Question: I’m excited to see Steven R. McQueen on Legacies! Any scoop on Jeremy’s return? –Ryan
Ausiello: No new details to share on Jeremy’s return to Mystic Falls, unfortunately, but Matt Davis did offer some fresh intel on what Matt (played by Zach Roerig) is like on the show: “He’s basically [treated like] the town conspiracy theorist, but they’re [obviously] not conspiracies. They just think that he’s a conspiracy nut. But he’ll do things like spike the local gas station’s coffee with vervain so people passing through are just drinking coffee, not realizing they’re getting dosed with vervain.”

Question: All this talk of Caroline being missing at the beginning of Legacies is stressing me out. What do you know? –Ash
Ausiello: I only know what series creator Julie Plec told reporters Monday at the show’s TCA session: “We’re going to hear her and feel her a lot. I don’t know when we’ll see her,” the EP said. “The girls are dealing with the fact that their mother, who has raised them, is a little absentee lately. And they believe she’s off on recruiting missions, and Alaric knows that she’s actually off doing other things that have to do with the long-term survival of their daughters. So the mystery of ‘Where is Caroline? Why isn’t she coming home for their birthday?,’ that kind of thing is going to be part of our story, in the hopes that one day we’ll be able to have her walk through the doors as well.”

This AAnd That…
♦ BLIND ITEM: An A-list film actor/actress will soon be starring in his/her first major TV series, but there’s a catch that no one is talking about: The performer in question only signed on for one season. And this series is not being billed as an anthology.
♦ BLIND ITEM UPDATE: The “major character whose life was left hanging in the balance in the finale of an hour-long drama on one of the five broadcast networks” and who is “definitely, 100-percent dead” can now be revealed here.
♦ THE GOOD DOCTOR: Rumor has it we’re going to meet Dr. Glassman’s daughter Maddie in Season 2. There’s just one problem: She dead. And has been for a long time.