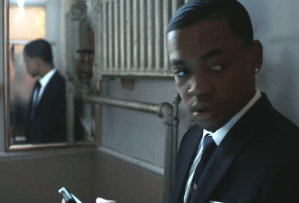 With one word texted toward the end of Power‘s Season 5 premiere Sunday, Tariq St. Patrick certainly chose a side. Faking tears while giving the eulogy at his twin sister’s funeral, ‘Riq ran off stage and holed up in a bathroom, where he pulled out his phone and alerted Dre — his dad’s enemy — that hitmen were coming for him. Thanks to the teen’s alert, Dre got away. (For a more detailed rundown of everything that happened in the premiere, check out our episode recap.)

And when ‘Riq’s drug-kingpin father Ghost eventually learns that his own son was the one who tipped off Dre? “I don’t know how you walk back from that,” series co-creator and executive producer Courtney Kemp tells TVLine. “I don’t know where you go. I don’t know what that becomes.”

She explains how, when the show’s writers were plotting out the episode, they didn’t want Ghost, Tommy and Kanan — whom the staff nicknamed “the three amigos” — to have a plan that didn’t work.

“The whole point of our show, in that way, is that everyone has a plan, the plan gets executed, it’s executed well, and then there’s a piece of it that doesn’t work because of something they don’t know,” she says. “In this particular case, Dre was dead. If Tariq did not text him, he was dead.” Ghost & Co.’s inability to see the disgruntled teen as a potential threat, she says, wound up being their downfall.

“They didn’t take it into account, Tariq as a player,” Kemp adds, “because he’s a child.” She refers to something show co-creator/EP Curtis “50 Cent” Jackson pointed out in TVLine’s preview of the premiere: Ghost’s son is “not a child. He’s acting like a man.”

In fact, Jackson adds, Tariq’s affinity for Kanan stems in large part from how the ex-con sees and treats him. “Kanan provided the ability for him to make his own decisions, and he’s made the wrong decisions, but this is instinctively what [Tariq] would do as who he is,” he says.

Were you surprised by Tariq’s duplicity in the Power premiere? Let us know in the comments!