Warning: This post contains spoilers for Sunday’s Season 4 finale of Power. And if you need to catch up, check out the previous Power recap here.

Sorry, Raina, but Power co-creator Courtney A. Kemp says you were a goner from the get-go.

“It was always going to be Raina,” Kemp tells TVLine, referring to the fatal shooting of Ghost’s teenage daughter in the season’s penultimate episode. The girl’s demise kicked off a chain of events — another murder, a quick cover-up and a huge sacrifice, just to name a few — that fill the Season 4 finale and set up a revenge-fueled Season 5. “The only conversation was whether or not she was going to be just shot or shot and killed, or whether she was going to live into Episode 10 and then die.” (For the record, “I always wanted her to be [instantly] dead,” the showrunner says. “I always thought that was the strongest choice.”)

Before we get into the nitty-gritty with Kemp, some quick highlights from the season ender:

* Tariq refuses to tell his parents and the police that Ray Ray killed Raina, preferring to try to get vengeance on his own. Dre helps/basically sends the teen to his death by giving ‘Riq Ray Ray’s location. Thankfully, Tommy and Ghost also figure out where the boy was heading (thanks to some intel from Kanan) — as does Tasha, with Angela’s help — and the St. Patricks and Tommy show up… but not in time to stop Tariq from using Tasha’s gun to kill his sister’s murderer. They hustle the kid out of there and get rid of most of the evidence, but when Angela is called to the scene, she notices a stray bullet left in a wall. Oops.

* Knowing that Terry — who’d professed his love to her — had noticed Ghost’s absence after Raina’s death, and knowing that her weapon was now linked to a murder investigation, Tasha turns down the lawyer’s offer of romantic partnership and instead asks him to represent her (setting up a very convenient lawyer-client privilege). “It’s not James” who committed the crime, she tells him, covering for her son. “It’s me.” 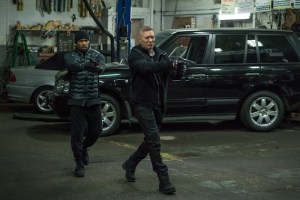 * Earlier, after Uriel tells Ghost that the Jimenez were not behind Raina’s hit, he lets it slip that he and Dre colluded to kill Julio. Elsewhere, after Father Callahan meets with Dre to tell him that he wants out — because he knows who really killed Julio and “I don’t like the way you work” — Dre kills the priest and leaves his body on a park bench.

* Though the Jimenez siblings aren’t happy that Uriel is dead (thanks to Ghost and Tommy’s visit earlier), they make official their partnership with Dre. Tommy, Ghost and Kanan, who’d planned to attack Dre right there, realize they’ve got to regroup and recruit more “soldiers” before they can take down the upstart.

* Meanwhile, over at the AUSAs’ office, Maria Suarez gives her statement…

Read on for Kemp’s thoughts on:

TASHA’S SACRIFICE | The EP notes that, because Terry noticed James’ absence at the apartment after Raina’s death, Tasha “definitely needs there to be an alternative to [Ray Ray’s killer] being Ghost, because she can’t control him and what he might do, and an alternative to it being Tariq, because she’ll do anything to save her child. So she wants to get Terry in a position where he can’t speak about anything he saw that day because he’s her attorney, and she wants to get him into a situation where he believes that it’s her.” As to whether Mrs. St. Patrick returns the legal eagle’s affections? “I think she does,” Kemp says, “but the love of a child is always going to be stronger than the love of a man.” 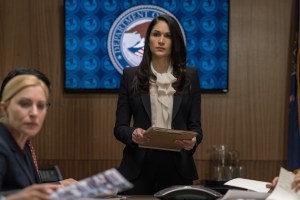 ANGELA’S SUCCESS | If Angela’s feeling bulletproof after having come through Jamie’s trial not only having kept her job but having been promoted, “early in Season 5, she’s going to feel differently,” Kemp teases. “Let’s just say that Angela does not always do a good job of watching her own back, and there are people she works with who will take advantage of that weakness [and] opportunity.”

DRE’S HUBRIS | “Ghost and Tommy are real adults” in their dealings with the Jimenez siblings this season, Kemp notes. “Dre is a twentysomething, and he may have bitten off more than he can chew… We were always planning for him to be Ghost 2.0. Basically, I think I said this before, so forgive me if this isn’t an exclusive, but this is the truth. The truth is, Dre is Ghost 2.0, and Tariq is Ghost 3.0.”

MARIA’S SECRET | Kemp says she’s not sure yet when Maria’s reappearance in the story will affect (and possibly blow up) Ghost’s world. “There’s some talk of doing it right away, and there’s some talk of waiting a longer time. But what I will say is that it’s a complicated story, because if you remember, Ghost actually let Maria go,” the EP reminds viewers. “So it’s complicated, because he shows kindness.”

Now it’s your turn. Grade the finale via the poll below, then hit the comments to tell us what you thought!