Noooooo, Power! Not the good twin!

Alas, despite Tariq’s cascade of increasingly bad decisions as of late, it’s his twin sister, Raina, who pays the ultimate price in Sunday’s episode: While bravely standing up to a dirty cop who’s literally gunning for her brother, she is shot in the chest and bleeds out while a shocked Tariq looks on.

How did we get here? It begins with Tariq’s plan to evade Brains and the other guy who are looking for him after he fled the botched robbery/actual murder: ‘Riq thinks he’ll just go to Choate, the Connecticut boarding school Raina mentioned earlier in the season, and all of his problems will disappear when he crosses state lines.

Ghost and Tasha are pretty much on board with the idea, and when the teen asks his father whether he should be afraid of Kanan, Ghost replies that Kanan can’t do anything bad to them — i.e. snitching — without hurting himself in the process. So that’s the rationale Tariq uses to front like he’s a stone-cold player when Brains and the other guy (what is his name? I never caught it) eventually track him down: Tariq says that his saying anything to the cops would implicate him… and then, because ‘Riq is not bright, he demands his cut of the job. The other men walk away, seemingly placated, and that little smile of accomplishment that Tariq has as they go seems dangerous in the extreme.

But when Ray Ray — remember him from Jukebox’s crew? another dirty cop? — shows up and starts asking the guys about what happened the day they killed the homeowner, they throw Tariq under the bus but then reassure Ray Ray that he won’t say anything to the authorities. He reminds them that Ghost is Tariq’s dad, Kanan is all up in the whole mess and that now everyone involved in the home invasion is a giant liability. Then he shoots them both dead.

Ray Ray, dressed in his police uniform, also stops by the St. Patrick siblings’ school and asks Raina where her (absent) brother is. Later that night, ‘Riq confesses to his sister who Ray Ray really is, then swears her to secrecy. She promises not to tell.

Later in the hour, both kids go to a dance at school. And when Tariq gets a text from Destiny — the girl he’s been messing around with… who happens to be Ray Ray’s cousin — it’s really Ray Ray who’s waiting outside for him with a gun. ‘Riq runs, but when Raina comes out looking for him, she finds the crooked cop instead. “I know who you are, Ray Ray. You need to leave my brother alone,” she says. That’s when he puts a bullet in her. (Side note: It’s terrible.) Tariq sees the shooting, and as Ray Ray flees, ‘Riq goes to his sister’s side and stares, open-mouthed, at her lifeless body.

It’s a terrible waste of a life — which you could say for so many of the characters in the show — and I cannot even begin to imagine the hell that will be unleashed when Ghost and Tommy learn the news. 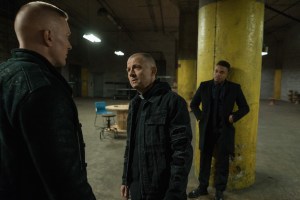 * Dre and Cristobal set fire to the warehouse holding the Serbians’ product, which means Tommy can’t supply his primeras with drugs to sell. They’re incredibly unhappy about that, given that they’ve already paid, and they all leave him. Then Dre quits, too, and he and Cristobal celebrate. In another part of the city, Kanan enters his apartment but gets the jump on some dudes that are there to kill him. (P.S. They’ve probably been sent by Cristobal.) . (Yep, I totally missed this the first time I watched. Sorry, guys!)

* Tommy, high on coke, is incensed to learn that Tony Teresi wanted him to be raised by him and Connie, but Kate refused, going as far as to change Tommy’s birth name from Teresi to Egan. Even though it’s the worst idea in the world, Tommy uses his birth certificate to prove he’s Teresi’s kid, which allows him to visit his old man in jail. “You look like an old-ass verion of me,” Tommy says when he finally meets Teresi face-to-face, then he asks to meet “the rest of our family.” Given that LaKeisha and Tasha are now refusing to launder Tommy’s drug money, and he’s kinda desperate, something makes me think that Tommy’s not just talking about great-aunts and such.

* Ghost uses Councilman Tate to shame Simon Stern into giving him a bigger cut of the real estate deal, but then Tate makes it clear that the whole thing was quid pro quo for his own interests. 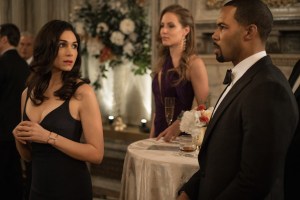 * Angela is named head of criminal at the Assistant U.S. Attorney’s office — instead of Mak or Saxe — at a gala highlighting wrongful incarceration where Ghost just happens to be the guest of honor. They have a breathy, fraught conversation that ends with a lingering look, then they clasp hands and wish each other good luck.

* Maria — remember her from way back in the day?  The fiancé of the guy Ghost killed in the series premiere? — hears Ghost’s voice when James is interviewed on TV about his real estate venture, and she remembers him as being there the night that Miguel was killed. She freaks.

* Tasha tells Silver (and LaKeisha) that as soon as Ghost’s real estate money starts coming in, she’s going to divorce him and start her own legit business. Isn’t it pretty to think so?