As Season 3 of Fear the Walking Dead neared its conclusion Sunday, Alicia made a new friend (If Loving You Is Wrong’s Edwina Findley); Nick got reacquainted with an old one (drugs); Strand took a clandestine meeting with Proctor John; and, as promised, Ofelia and Daniel were reunited in a manner that was “incredibly dark and twisted.” How incredibly dark? How incredibly twisted? Turned out, the walker that I thought had gotten close enough to bite Ofelia in “This Land Is Your Land” actually had bitten her, and by the time her father arrived at the trading post for their rendezvous in “El Matadero,” she’d passed away. Here, Mercedes Mason shares with TVLine her thoughts on her ill-fated character’s heartbreaking demise and her plans to create a new life in the wake of Ofelia’s death.

TVLINE | How long had you known Ofelia’s number was up?
If I remember correctly, I found out around Episode 10. [Showrunner Dave Erickson] is aware I was trying to start a family, and he’s heading off the show, so it was like, “Okay, a lot of things are going to be changing at the end of the season. If we maybe let Ofelia go, how dramatic can we make it?” With the fact that fans have been waiting for the reunion, I think there was something so tragically sad and beautiful about Daniel never actually getting to his daughter, then him being the one who actually has to put her down [lest she turn].

TVLINE | It sounds like you were very much a part of the conversation to kill off Ofelia.
I don’t know how much of a part, because I don’t know what they had in mind to begin with. Maybe Ofelia would have been taken out [under other circumstances]. But Dave and I had been talking about it for a while. We shoot in Mexico, and my husband needs to be in the same city for us to make a baby. Funny concept — he doesn’t want me to cheat, he wants it to be his biological baby. [Laughs] And we didn’t know where we would be shooting [Season 4]. They could have said, “Hey, you’re shooting in Morocco!” for crying out loud. So it made me a little bit nervous, because then I’d never see my husband, and it would push making a baby even further to the back burner. Obviously, I would have liked for Ofelia to make it to the end of Season 3, but I understand the beauty of her never being able to utter another word to her father. 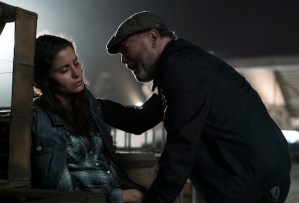 TVLINE | I’m not sure how much sadder they could have made it!
I know! [Laughs] There was one take that Rubén [Blades] had done where he was just absolutely sobbing, and there was something so beautiful about that. It felt like every sort of sin Daniel had ever committed had come to a head, and he was letting it out at that moment. [In the end,] they chose to keep him stronger, which I understand because he’s a Salazar, but I wish they would show the outtakes, because he was so incredible. I’m supposed to be dead, and I’m trying not to sob as we filmed it. It was really, really sweet.

TVLINE | Were you bummed that you didn’t get to be zombified?
No, I liked the fact that I didn’t have to turn. I think that would have cheapened it if all of a sudden it became more about Daniel surviving and his daughter now biting him as opposed to him choosing to put her down just so that she doesn’t have to experience that sort of pain. It was beautiful writing in that episode, but we went back and forth about, “What are the last words you can possibly say to the father that you’ve just sort of realized you never really knew that you’re dying to get to know because you finally understand him after all this time?” I was talking to the director, Stefan Schwartz, who I love, and I said, “Just give it a real pregnant pause” [before Ofelia gives her message for Daniel to Madison]. Because otherwise, if she’s just like, “Hey, lookin’ forward to meeting you!” it doesn’t quite work. That pause sort of encompasses everything she was hoping to say to him.

TVLINE | The line itself is pretty powerful, too: “Tell him I was really looking forward to getting to know him.” I felt like it implied forgiveness and kind of a longing for a future they weren’t going to get.
Yeah. I shot it and watched it back, and I was crying. My husband said, “You were in it,” and I was like, “I know!” [Laughs]

So, what did you think of “El Matadero”? Were you surprised that Ofelia died? Sorry she wasn’t allowed one last moment with her father? Hit the comments.