But… but we hadn’t even gotten to say, “Hail, hail, the gang’s all here” yet. Nonetheless, Sunday’s Fear the Walking Dead found another member of our long-splintered group bailing on the reunion that showrunner Dave Erickson promised was coming. Can’t say we blamed the character in question for pulling an Ofelia and striking out on their own. But it was still kind of a bummer. Read on, and we’ll go over how we got from here to… well, not here anymore.

‘YOU’LL BE IN HEAVEN BEFORE YA GET THERE’ | Picking up where “Brother’s Keeper” left off — R.I.P., Jake — “This Land Is Your Land” began with the situation in the ranch’s pantry going south faster than you could whip out a compass. Turned out, the vent was sealed, meaning that Alicia, Ofelia, Crazy Dog and all the ranchers you don’t know by name would be killed by carbon dioxide in two hours. To buy time, the trio whose names we do know decided that, since fewer people produce less carbon dioxide, they should put down those who’d been bitten when the infected stormed the ranch. Miraculously, Blake — whose name I’ll admit I didn’t know until Sunday — volunteered, paving the way for others to step forward. So, while Ofelia and Crazy Dog headed into a claustrophobic’s worst nightmare to unblock the vent, Alicia was tasked with… basically killing a whole bunch of people who until an hour earlier had been her neighbors. #goodtimes

Meanwhile, Nick, after keeping Troy from launching into a chorus of “Only the Good Die Young” in his brother’s honor, hatched a plan to save the day. Unfortunately, Nick being no Rick Grimes, it did not go well. Though he was able to — in a single shot! — hit a fuel tank, sparking an explosion to distract the walkers, Troy seemed less interested in driving them to the chopper through the walkers than in driving into the walkers, period. And, gore-stained windshields being notoriously difficult to see through, in no time at all, he had crashed into an RV. Somehow, the duo still managed to make it to the chopper, which Nick appeared convinced would be as easy to drive as a golf cart. To his credit, he did get the thing started, but only briefly. When the engine died, it looked like he and his bestie were going to do the same. Troy even went so far as to note that he had saved a single bullet and gave Nick the choice of which of them was gonna use it. Before either of them could, however, there was an explosion. 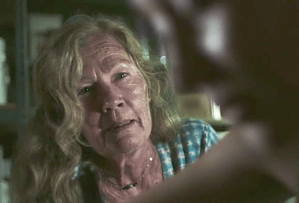 ‘EVEN WHEN YOU’RE HOPELESS, HOPE IS ALL YOU HAVE’ | Back at the ranch, Alicia faltered after gently killing her first volunteer. “I know it’s hell,” said a woman whose name I only just learned was Christine (and I think I long mistook for doppelgänger Patty). “But those people have done their part. You need to do yours.” When next we checked in on Alicia, she had woman’d up, dispatching all but one of the ranchers who’d been doomed by their bites: Blake. “I’m sorry for what I did,” the militiaman cried before being put down. That least pleasant of tasks out of the way, Alicia deserved a drink as tall as a water tower. Instead, all she was served was a nice heart-to-heart with Christine, who encouraged her to avoid her mistake and “never make decisions based on fear.” Later, trading memories with Christine, Alicia recalled Nick comically coming to her rescue when, at age 9, she forgot the words to “This Land Is Our Land” during a talent show. Christine, unimpressed, fell asleep. No, wait, that’s not right — she didn’t doze off, she passed out due to a lack of oxygen. In fact — oh dear — everyone but Alicia had lost consciousness. As she, too, began to fade, she caught a hazy glimpse of a zombified rancher chowing down. And right and left, more of the undead were rising.

While all this was going on, Ofelia talked Crazy Dog through a panic attack en route to clear the vent, and we learned more about him in that couple of minutes than we had all season. He’d served in Iraq, for instance, had had a son and didn’t like confined spaces. Then it was back to the mission, which the twosome barely completed. The vent wasn’t working, they learned, because — what are the odds? — it had a walker hanging off of it like the world’s grodiest Christmas ornament. Crazy Dog was hoisting Ofelia up to dispatch it and remove it from overhead when, the carbon dioxide at last getting to him, he stumbled, in doing so bringing down the zombie on his companion. Despite the fact that the walker landed with its mouth close enough to Ofelia’s neck to leave a hickey, she managed to put it down. Which was especially good, considering the big news that she was about to get. 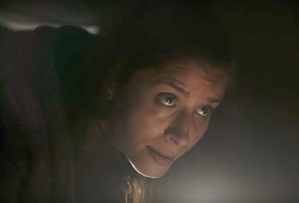 ‘STOP PRETENDING ANY PLACE IS SAFE’ | As air began to recirculate in the pantry, Alicia revived and, while trying to protect Christine, took out as many of the newly infected as she possibly could. But she was so badly outnumbered that it appeared her number was up… until… the aforementioned explosion. That, we discovered, was Madison and Strand’s handiwork. Just before Alicia was turned into a zombie chew toy, her mom and Victor burst into the pantry with not only Walker but Troy and Nick, too. The blast, it seemed, had saved everybody. Well, not Christine. In spite of Alicia’s valiant efforts, Christine didn’t make it, leaving her new pal in the heartbreaking position of having to stab her in the brain. (Honestly, the moment was pretty emotional, especially considering how little of Christine we’d ever seen.)

Bummed that she couldn’t save the ranch, Madison told Nick that their next stop would be the trading post to get supplies, then they’d be off to the dam. Before leaving, though, she had to inform Ofelia that a) her father was alive, and b) he was eager to see her. The news for Alicia was not so exciting. When she asked where Jake was, Troy blurted out, “He got bit. I put him down.” She clearly suspected that the horde hadn’t just materialized out of thin air, so Nick — dude, seriously? — lied for Troy, painting him as a hero who’d tried to warn everyone of the walkers’ approach instead of the villain who’d acted as their field guide. Finally, Alicia announced that she wouldn’t be going with them to the dam. “We die as quickly together as we do apart,” she noted. That being the case, she needed to live for herself, for once not in fear. (Clearly, Christine had had as big an impact on her as she had me.) After Alicia set off for the hideaway that Jake had showed her, Madison agreed to let Nick tail her, just to make sure she was safe. He’d be back, though, he promised. “Take Troy,” Madison said, if you ask me, putting her daughter in more danger than she’d have been in if Nick hadn’t followed her at all.

So, at this point, who’s scarier — Troy, the remorseless killer, or Nick, who’d risk anyone and everyone’s life to protect him? And was I the only one who wished we’d gotten a lot more of Christine earlier in the season? Hit the comments.