Any Fear the Walking Dead viewer with a brain more functional than a walker’s would have predicted that letting Troy live was going to come back to bite Madison; the only question was how hard. What we might not have predicted — at least I didn’t — was that the teeth marks would get made in somebody else’s flesh. Who was the first to pay the price for Madison sparing her psychotic surrogate son? Read on…

‘EVERYTHING I WAS FIGHTING FOR IS GONE’ | As “Brother’s Keeper” began, we were treated to a montage that showed what Troy had been up to since his banishment — mainly, perfecting Daryl Dixon’s recipe for grilled snake, writing in his journal as frantically as Winona Ryder in Heathers, and contemplating suicide. But, upon finding a bigger gun and more ammo at McCarthy’s outpost, he back-burnered those pastimes in favor of pursuing what the Grinch would have called a wonderful, awful idea. What was it? Keep reading; we’ll get there. Meanwhile, back at the ranch — which I somehow never tire of typing — Jake was so bummed about having had to put the herd down, lest they draw the infected, that he wasn’t mollified in the slightest when Alicia promised, “If we live long enough, I’ll get you more cows.” No, he was ready to abandon the Broke Jaw and live with his girlfriend at the Ottos’ cabin near the border.

Right on cue, we cut to Ofelia, kinda-sorta suggesting to Crazy Dog that, if Madison and Walker didn’t make it back, they should stage a coup, and kinda-sorta just smack-talking Jake, calling him less of a leader at the ranch than Alicia and Nick. Which was mean but also, you know, true. Not that Nick was doing so great. Besides fixating on the fact that he’d killed that soulless bastard Jeremiah so that Madison wouldn’t have to, the insomniac was worried about his mom… and Troy. If you ask me, he was worried about Troy in the wrong way — that isn’t someone whose safety you worry about, that’s someone who you worry about your safety around. Anyhow, that night, the maniac in question snuck into Nick’s bedroom to warn him that “there’s a reckoning at hand, something new, something to delight in”… and something he should flee, because in a few hours, that “something new” was going to leave the ranch “obliterated.” 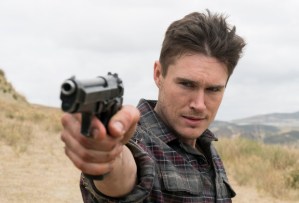 ‘IS THIS A RELATIONSHIP OR AN ALLIANCE?’ | The following morning, Nick interrupted a lovers’ spat between Alicia and Jake with news of Troy’s unusually poetic warning, and off the two guys went to find the doomsayer. Before long, they spotted a cloud of dust, which in and of itself isn’t that scary. But this particular cloud of dust was being kicked up by a massive horde of the infected. If they couldn’t lead it away from the ranch, everyone on the property would be joining the dead cows in that big pasture in the sky. Unfortunately, no sooner had they come up with a plan than a monkey wrench was thrown in it: The horde was being led by — wait for it — Troy! “This is evolution,” he told his brother. “This is murder,” Nick countered, walking directly into Troy’s retort of “You wanna go there?”

Over and over, it seemed, Jake was about to pull the trigger and put down his brother — like he should have a long time ago, he tearfully noted. And over and over, he didn’t. Either he couldn’t, or Nick intervened before he could. (Clearly, someone wasn’t going to survive this standoff.) By and by, Troy let in Jake on a coupla terrible secrets: 1) Nick had shot their no-good father, and 2) Alicia knew about it. Jake was crushed on one hand but, on the other, was already too wrecked to really feel any worse. (He’d really liked those cows.) Once again, he moved to shoot his brother, and this time, when Nick intervened, it resulted in Jake being bitten by a walker. Though Nick gave him the Hershel Greene treatment, it was too late, and he died a short while later. (Nice job looking after your sister’s boyfriend there, Nick. Really stellar.) Troy, stunned that his fiendish plan had gone so awry, asked Nick to kill him. “Kill yourself,” Nick replied, kicking a gun toward him. 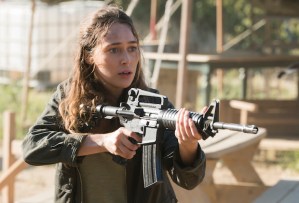 ‘TROY MAY HAVE SAVED OUR LIVES’ | After being filled in about the horde as best one can be filled in over a staticky walky-talky, Alicia recruited Ofelia to help convince Crazy Dog to arm the ranchers in preparation for what was headed their way. (Since I don’t imagine Crazy Dog is going to survive the season, I feel it’s best to say now, while I can, that I love his name and the way it sounds exactly like the brand of dog food I’d buy for my pet.) In no time, Crazy Dog and Coop were glaring at each other like old frenemies, and the Nation and the ranchers had teamed up to circle the wagons. Well, the RVs, but same principle. As you’d expect, “RV fence” being < “seething mass of walkers,” it wasn’t long before the ranch was overrun. “Everyone to the pantry!” went Alicia’s desperate cry… which only slightly made it sound like she was suggesting they all take a break and have some chips.

For a hot minute — but only for a hot minute — it looked as if Alicia, Ofelia and Crazy Dog weren’t going to make it inside for snack time. Coop made it to snack time, too, but in the worst way possible — by becoming walker chow. When he tried to spare himself the sensation of being eaten alive by shooting himself, only to find that he was out of ammo, Alicia mercy-killed him, putting a bullet between his eyes. Once inside the pantry, she found herself being stared at by a whole bunker full of frightened faces. She looked pretty scared as well, truth be told, but there was no time for that — she had to be a leader they could follow, and fast! At least “help” was on the way — Troy, who’d been guiding the infected to the ranch in the first place, and Nick, who’d gotten Jake zombified protecting him. “We need to find a way,” Alicia’s actual brother said to his pseudo brother, “to save everyone you tried to kill.” Oh, Alicia, you are so screwed.

So, were you surprised that Troy survived the hour, not Jake? Who else do you think won’t live to see Season 4? Hit the comments.