“This ends bad, man.” Fear the Walking Dead’s Nick wasn’t just going for the Understatement of the Year award when he issued that dire warning to Troy during a shootout with the Nation in the AMC drama’s Season 3B premiere; he was making what seemed to be an inevitably accurate prediction.

Here, showrunner Dave Erickson breaks down for TVLine Sunday’s “Minotaur”/”The Diviner” two-parter, in which the dwindling water supply at the Broke Jar Ranch led to racial tensions so extreme, you might have felt like you were watching the evening news; Nick confessed to Troy that he’d killed Jeremiah; Troy’s violent standoff got him banished; in very different ways, Nick and Alicia tried on leadership roles; and, after saving Strand’s butt at an anything-goes bazaar, Madison decided that he could return the favor by taking her and Walker to the dam… that she doesn’t yet know is controlled by the “late” Daniel and Lola.

TVLINE | Why on earth did Nick tell Troy, in the middle of his rampage, that he’d murdered his father. Did he really think that was going to calm Troy down?
Here’s the thing: Nick is an addict, and he’s always had this fascination with the dark side and death. He went from heroin [being his fixation] to the dead last season, and now there’s something about Troy’s ugliness that he responds to. But despite that sort of fascination that Nick has, he’s never been his mother in terms of his ability to kill. And going into the back half, whatever he may think about Otto and Troy, Nick took a man’s life. And one of the things we try to do on this show is never minimize that.

TVLINE | So Nick wanted to die?
There is a bit of a death-wish moment there. He’s tried desperately to raise Otto up as this hero who took his own life to save everyone, and Troy’s not buying it. Finally, when they’re cornered, [Nick believes that] if Troy dies, a lot of people on the ranch are going to rise up against the Nation and everything’s going to fall apart, and that would, of course, impact his sister and his mother, so he decides to sacrifice himself.

TVLINE | He just got lucky that it didn’t come to that.
I think his hope is that Troy will be so gut-punched by that confession that he will, at the very least, stop shooting, and it might buy time. I don’t think he necessarily anticipated what Troy did. For me, it’s a moment for Troy where he actually feels something. He’s not accustomed to having reactions… [but] he’s as close as he can come to being devastated in that moment. He’s trying to understand how this guy who he counted as a friend, strangely, could have killed his dad. That’s the window that Nick was hoping to open [to allow] the Nation to come in and take him down. He was using the confession as a tool in that moment. If that meant Troy was going to shoot him, I don’t think he really cared. There’s a shared self-destruction that both of these guys have, and that’s something we’ll continue to explore over the course of the season. 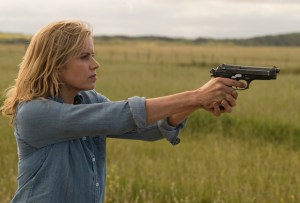 TVLINE | Before going into exile, Troy warns Madison that he doesn’t surrender — basically, promising that, so long as he has a pulse, he’s a threat. Why doesn’t she shoot him?
Madison, in some respects, has reached her own point of exhaustion. Had Nick not walked in in [the midseason finale], she probably would have put Otto down. She really tried not to — she wanted him to do the right thing. But she would have done what was necessary. Now both she and Nick are in this strange aftermath of that death. For her, that means exploring the idea of not pulling the trigger and not resorting to violence. By scapegoating Troy, there’s a hope that he won’t come back. She is in some respects inviting the other shoe to drop, and there’s a very good chance it will. But for Madison, one of the larger themes of the season is violence and when is it justified, if ever, and what are the repercussions that stem from it? Just as, when she does pull the trigger, it reverberates, when she doesn’t, there’s going to be an aftermath, too. She has compromised herself and her morality to a huge degree in what she feels is a good pursuit. But by the end of the season, she’ll be disabused of that notion. And a lot of the arc of the back half does hang on the decision not to kill Troy and what that will do for Madison’s family and the ranch as a whole.

TVLINE | In other words, I shouldn’t hold out much hope for an 11th-hour redemption for Troy.
[Laughs] I wouldn’t hold my breath. When you see him in moments of humanity, nine times out of 10, he’s mimicking. We’ll speak to this later in the season. He mirrors what is expected, and so there are times when he demonstrates emotion that are really just him acting. 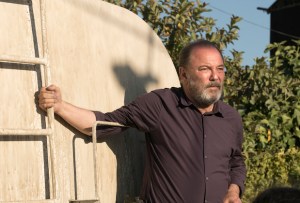 TVLINE | Switching gears, why doesn’t Strand mention to Madison that rumors of Daniel’s death have been exaggerated?
There’s almost a missing Strand episode. We’d planned to do an interstitial webisode series which featured Strand and his journey from the burning of the Abigail to his place at the trading post. He mentions he compromised himself and put himself in debt to the [bazaar’s] proctor, and when we find him, he’s somewhat down and out. It’s tricky for him, because in the first half of the season, he tried to use Ofelia as a bargaining chip with Daniel.

TVLINE | Maybe not his best plan ever.
The last time he saw Daniel, Daniel left him to die. So I don’t think he’s necessarily thinking that he would be welcome, were he to return [to the dam]. Even when he finds out that Ofelia is still alive, there’s still a danger there. Strand has witnessed a side of Daniel now that even Madison hasn’t seen. She knows that he’s capable of torture, but Strand stood there at the dam and watched as Daniel took down three people in this very John Wick fashion. So I think he’s scared… and wants to see the playing field before he commits to anything. He doesn’t know if Daniel’s first reaction [to seeing him again] will be a bullet in his head.

TVLINE | Is it safe to say that Daniel and Ofelia will be reunited before the season ends?
Yes. The back half is really about reuniting our core group. The goal in my mind was always to finish this season having brought them all back together, this dysfunctional, blended family. So you can bank on a father/daughter reunion. The circumstances of that reunion will be incredibly dark and twisted, but yes.

What did you think of the Season 3B premiere? Grade it in the poll below, then hit the comments.