Warning: This post contains spoilers for the season finale of UnREAL.

Everlasting‘s final key has been distributed — and hoo boy, what a Pandora’s box it unlocked.

UnREAL‘s season finale Monday night found Rachel and Adam preparing to run away together… only to have him back out at the last minute, then propose to Anna in time for Everlasting‘s live wedding special. A heartbroken Rachel — who’d also been publicly dumped by Jeremy — put her inner agony to good (?) use by getting Adam to confess that he didn’t love Anna. The blonde then stood him up at the altar, in the process creating a highly entertaining episode of “reality” TV.

But when Rachel learned that Quinn got Adam to renege by telling him that Rachel had been hospitalized for mental illness, the younger producer was livid. In a scene that rang with subtext, Rachel telegraphed that Quinn better watch herself next season.

TVLine chatted with executive producer Marti Noxon to get her take on the Adam-Rachel-Jeremy travesty triangle, Grace’s backstory, Adam’s royal roots and whether or not Anna was working a long con of her own.

TVLINE | Freddie’s chemistry with Shiri Appleby is off the charts — I imagine that was a good moment, when you realized how well they paired.
Oh my gosh. I mean, the chemistry of the cast in general is so critical. We felt so lucky to have all of them, particularly Constance and Shiri, because those characters in different hands could be very unlikeable. 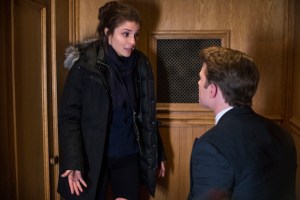 TVLINE | What can you tell me about Rachel’s mindset as we move into Season 2?
Sarah [Gertrude Shapiro, series co-creator] and I have always joked that when [Rachel] basically is humiliated by Adam and then she has to watch him propose to and go through the motions of marrying somebody else, there’s just a moment where she goes full Walter White, you know? Like, the dragon comes totally out, and she can’t see straight for her raging humiliation. We leave her unbridled, and a little bit out of control, and her dragon powers are at full force. So we think it’s going to be pretty interesting to see what she does with all those feels when she comes back in. We don’t even know if we’re jumping forward in time or what, but yeah, she’s a loaded gun right now.

TVLINE | That scene in the confessional, in particular, stands out.
Wasn’t she amazing in that? 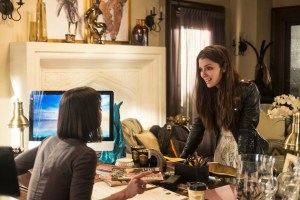 TVLINE | Yeah — and also in the scene with Quinn at the end, when they exchange “I love you”s, but there’s a very weird energy there. Can you forecast that relationship as we move ahead?
They have such a stand-in relationship for Rachel’s own mother. Rachel’s own mother is batshit, [Laughs] and obviously has really messed her kid up. So I think the amount of anger that Rachel has towards Quinn for ruining her fantasy destiny is also kind of measured by like, “Maybe I am sick, maybe I do need help, maybe she did rescue me.” Part of her wants to destroy her, but the other part thinks, “Maybe if I destroy he,r am I destroying myself?” She’s deeply confused but deeply angry. So they’re going to have a very complicated time when we come back. We haven’t decided yet whether they’re all-out war or… I just don’t think those women would ever play it that obvious. I think Rachel would play a long game.

TVLINE | Is Jeremy going to be as much of a player in Season 2 as Season 1?
I don’t know for sure. I feel like he definitely is going to be integral… Half of him is justifying going to Rachel’s mom and thinks it’s probably true that Rachel has gone around the bend again, but another part of him knows how toxic that relationship goes. So you know, I think he’s sort of lying to himself at the end. We’ll see if he gave in, you know, in war mode or if he falls to her charms yet one more time. Like, is he Charlie Brown? Does he fall? I don’t know yet.

TVLINE | We didn’t see Lizzie in the last few episodes. Is she still on set?
She’s around, but I think she’s dodging both Jeremy and Rachel.

TVLINE | Can you please clear up for me whether or not Adam is actually royalty or whether he’s just played off as royalty?
I think we say at some point he’s like, the heir to the Earl of Jerseyshire. He’s kind of a sub-royal. He’s not inner court royalty, he’s outer court royalty, but that still means money. And tabloids. As long as you have any kind of title, you’re made.

TVLINE | Thoughts on the format of Everlasting‘s next season?
We’re talking, absolutely, about switching the format up. You know what’s really funny? At one point, one of the pitches on the table was two bachelorettes, you know, two suitors. And they’re battling each other, because we love the cat-fight aspects of it. So we were going to call it Everlasting Cat Fight. [Laughs] And then [The Bachelor] did it! Sarah was like, “We have a mole. We have a mole!” [Laughs]

TVLINE | Quinn and Chet: Done for good?
My gut reaction is I never want him to touch her again. [Laughs] However, that said, Chet has gone on a crash diet and is looking really good — meaning [so is] Mr. Bierko, not that he wasn’t before. But [Quinn’s] going to come back next season, whatever the time frame is, and find that her nemesis romance has gotten kind of super hunky. We were so amused when [Bierko] started sending us pictures like, “Look at me now.” Like, oh my God. That could be a good story. Keep going, sir! 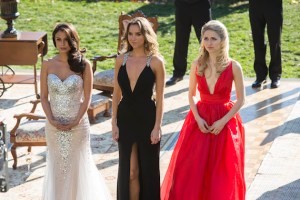 TVLINE | Toward the end of the finale, we watch Anna leave Adam at the altar. Did she actually care for him? She seems too smart for that.
I think, like many of these women, you kind of get Stockholm syndrome. You know? They’re isolated from the real world… they’re apparently not in touch with any outside influence, including no magazines, no books, no newspapers, nothing. And the one way out, your one shining hope is this guy…

I mean, I feel that way watching The Bachelor or The Bachelorette. I start to get weirdly, you know, “Maybe he is attractive. I wonder if he’d pick me…” There’s something primal in every woman that’s like, “If there’s only one, I have to get him.” You know? “Who’s going to fend off the bears? Who’s going to put a baby in me?” All that stuff. And I think that on some very subconscious level, even though they know they’re playing the game, they start to get swoony around the single man that you’re supposed to be attracted to.