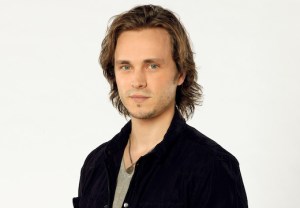 Despite that long up-and-down look Avery gave Juliette in Nashville‘s very first episode — you remember, in the hallway backstage at the Grand Ole Opry? — series star Jonathan Jackson swears he signed onto the country-music drama not knowing he’d wind up in one of its two main couples.

“But another thing is, when you’re in an ensemble cast and it’s a relationship-driven show, if the show’s around a few years, then chances are that the characters are gonna cross paths,” he says. “That’s just kind of how things work.”

Spoken like someone who’s seen his fair share of drama — daytime and primetime — throughout more than two decades in the business. Jackson got his start on ABC’s General Hospital as Lucky Spencer, son of supercouple Luke and Laura, a role that he left permanently in 2011.

… Or maybe not so permanently: As previously announced, Jackson will return this week as part of GH star Anthony Geary’s exit storyline/Luke’s final arc on the show. For those who haven’t spent time in Port Charles lately, Lucky’s mom (played by Genie Francis) recently returned to town with terrible news: Lucky is missing, and she and Luke (who are divorced) must go on an epic journey to rescue him from danger.

As the tour bus for Jackson’s band Enation rolled through Texas — he and the guys had played a gig the night before — TVLine talked to the GH returnee about his daytime homecoming (plus a little Nashville chat, for good measure).

TVLINE | What city are you in right now?
We’re traveling. We’re somewhere in Texas. We just played in Dallas last night.

TVLINE | How did you make the General Hospital return work, given Nashville and your tour?
It was definitely tricky. We looked at the amount of work I was going to try to accomplish on [GH] and then figure out how much I could do in a short period of time. We had a few days off of touring, and I flew to L.A. and I took my daughter with me so we could spend some time together. I did what was probably a week’s worth of work in two days. It was a whirlwind. But it was so fun to see everyone. It was really exciting to get to do those scenes with Tony. It was really special for me.

TVLINE | When I spoke with Genie, she said some of the scenes you had with Tony really moved her. Can you give me the gist of those scenes?
It’s funny. I hadn’t been following the show, so I didn’t know Genie was going to be there until maybe a week or so before I flew to L.A. I was so excited to see Genie and to get to work with her again. I don’t know, it’s hard to get the gist of the scenes without giving too much away. 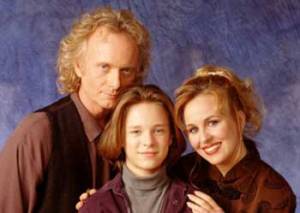 TVLINE | We know Lucky is in peril.
Yeah. But we were able to find some moments to have some more heartfelt scenes which was something that [I was really] looking forward to. I was excited about that.

TVLINE | How many episodes, total, did you shoot?
I believe it’s four.

RELATED Post Mortem: Nashville EP on the Mystery Flatliner, Hope for Juliette and Avery and Why the Hospital Wedding Almost Really Happened

TVLINE | Do we get an update on what Lucky has been up to, what his life is like these days?
I don’t think so, in a very specific way. I think it’s more in these vague terms.

TVLINE | You haven’t started Season 4 of Nashville yet, right?
No. I think we’re starting mid-July. It’s coming up.

TVLINE | Have you seen any scripts yet?
I haven’t. I’m curious like the audience is about how things are going to go.

TVLINE | You ended last year spending a lot of time with the baby playing Cadence. Your children aren’t infants anymore — did you have any flashbacks?
Yeah, there was definitely a lot of that. I was remembering. It’s funny because it goes so fast. When you’re a few years away from it, you forget a lot of stuff. I’ve gone through it three times.

TVLINE | Do you know anything about Juliette and Avery’s trajectory at the beginning of the season?
I really don’t. I have no idea where it’s going. 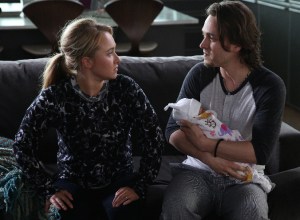 TVLINE | Some of my favorite music on the show came from the ZAG Band, then the SAG band, then The Triple XXXs. But it seems like Avery is no longer a part of that group.
It’s funny, because they formed a band and I think they broke up before they even performed a show. Played two shows, broke up again. They have not been the most consistent as a band. [Laughs] At this point, Avery has his child and that’s the top priority. I don’t think he’s up for touring with a band.

TVLNE | Finally, you need to weigh in on whether the flatline at the end of the season finale belongs to Beverly or Deacon.
Oh geez. I don’t know. [Laughs] If you look at Twitter… Chip is Chip. [Laughs] He’s a pretty big part of the show.