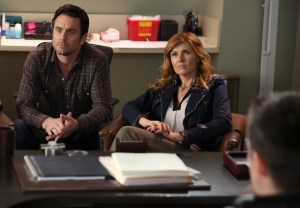 If you’re a Nashville fan who was gunning for Rayna and Deacon to get hitched in the Season 3 finale, you should know that showrunner Dee Johnson was ready to throw some rice right alongside you.

Johnson tells TVLine that the show’s writers “completely, totally entertained that idea,” which would have seen the terminally ill Deacon and his redheaded love officially (and legally) tie the knot just before he was wheeled into liver-transplant surgery. Instead, the couple exchanged informal, heartfelt vows, West Side Story-style.

Why didn’t Rayna and Deke make it official? Can Juliette undo the damage inflicted on her and Avery’s relationship? What’s next for Will, now that he’s out? And for the love of God, who flatlined?! Johnson — who wrote the episode with series creator Callie Khouri — addresses all of these questions and more below.

TVLINE | You have two patients on the table at the end of the episode, and one of them flatlines.
How about that, right?

TVLINE | Let’s just say that it’s Beverly who’s going to that great honkytonk in the sky. I imagine that would cause some survivor’s guilt for Deacon.
Well, I mean, if that came to pass, and by the way, just for the record, a flatline doesn’t necessarily mean somebody doesn’t get resuscitated. I’m just putting that out there. But if the scenario you’re talking about came to pass, one would certainly have some issues as a result of it. If anybody was going to donate something and they died on the table, certainly that would be pretty hard to live with.

TVLINE | Why did you decide not to go through with a real wedding in Deacon’s hospital room?
Such a complicated thing… I think the largest reason is that the general feeling from many, many parties who are involved in making this show is that it would be nice to see a real wedding at some point — if certain scenarios came true. But I’ll be honest: It was something I wanted to do. I wanted them to get a chaplain and get it done… On one hand, it’s a cold, horrible situation. But on the other hand, it couldn’t be more amped-up and romantic in that way. All that said, they basically in spirit got married in the room, and that’s what we wanted to have happen.

TVLINE | I loved that Teddy gets upstaged by Deacon even at his absolute lowest moment — as he’s getting hauled out in handcuffs — when Rayna and the girls turn away from the TV to hear what Caleb has to say.
[Laughs] I thought it was really a cool way to do it… It was too much to have two things happen in that moment of such urgency. It was a way of covering our bases and having it play neatly in the background.

TVLINE | Here’s the way I have my next question written down, verbatim: “Juliette and Avery: Are you trying to kill me with this?”
[Makes small, sympathetic sound.] Yes, I’m trying to kill you. [Laughs]

TVLINE | Every time they get a moment of happiness, she sabotages it. Moving forward, she can’t be around her baby, she’s defied Rayna and signed with Luke, she’s represented by Jeff. These seem like very big, season-long problems for when you guys come back.
Obviously, it carries over. We haven’t had an opportunity to really break next season, but in my mind, I love that couple — I think a lot of people do. I think a lot of people are rooting for them. In my mind, I don’t think it’s a season-long… they’re never going to be perfect, but I don’t think it’s going to take a season to get them back together because they have too much tying them together.

TVLINE | Will comes out in this episode. It’s taken him a while to get to this point; why have it happen now?
You know what? There was so much pressure all along to get him to pop out of the closet, like it’s so easy. I, personally, was so invested in making sure that story got told in what felt more like real time to me. We took him on a journey. We wanted to see every step — the first encounter, the first admission that he actually is what he is, getting him to a place where he is finally comfortable enough to come out — and then finally being in love with somebody for the first time in his life… That was our plan. Coming out publicly is going to have a huge impact on his career. But beyond coming out publicly was the next big thing in any person’s life, which was finally being allowed to feel love for somebody.

TVLINE | Are you thinking of keeping Kyle Dean Massey as a regular next season?
Who knows, in terms of regulars or not? But I do think he did a really great job. They really clicked together. He’s definitely in my mind certainly going to be a presence.

TVLINE | Layla and Jeff — when she was beating on his car with the golf club, I was thinking, “The show can’t not want us to think about Tiger Woods and Elin Nordegren at this point.”
[Laughs] When it came up, we wanted — because he’s always been golfing, because Oliver [Hudson] golfs. It’s always been a presence in the show — when she put it all together, and he has that nice Bentley, we thought, “You know what? She should just lose her stuff and let him have it.” …I’d say maybe it was sort of an after-the-fact homage to that moment.

TVLINE | At times, it seems like they might be good for each other. Other times, it seems like it might be very bad for her to be with him. What can you speak to about their relationship, moving forward?
There are so many of those type of relationships, historically in Hollywood or the music industry, where you have somebody who is very controlling. It’s kind of that weird, psycho dynamic thing. It can result in huge success but personal psychosis, and I think that they are in a very George-and-Martha sort of relationship. There is a love connection there, but it’s maybe not the healthiest love.

TVLINE | Scarlett and Gunnar: I don’t think I’ve ever been that physically close to someone in my life and not kissed him.
[Laughs] It takes incredible restraint! But to Scarlett’s credit in particular, she did just say that she’s going to move in with Dr. Rand. I mean, look: Those guys are the flip side of the Rayna-Deacon relationship. They are that kind of star-crossed, never at the right time, have crazy emotional attachments to each other, but here they both are, both with one foot out the door, and yet there’s something that’s very deeply present.