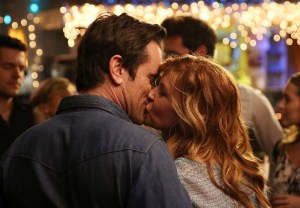 Nearly every night for the last week or so, Nashville‘s Charles Esten has tuned his guitar, stepped into the spotlight and lived the dream.

As part of the ABC series’ second live tour, which kicked off April 29 in New York, the actor performs several of his own compositions — some of which happen also to be Deacon’s. For a longtime songwriter who only recently has had tunes embraced by the public, watching people sing along with his lyrics is a heady thing, he says.

“It’s been one of the highlights this year for me to get to do “I Know How to Love You Now,” that I got to write with Deana Carter,” Esten tells TVLine during a brief break the afternoon of the tour’s first show. (Viewers will remember that Esten sang the song live during Nashville‘s Season 3 premiere.) “It speaks to the character so well, and to what Deacon’s been through, so to get to sing that one live is a joy every single time.”

PHOTOS May Sweeps/Finales: 100+ Spoilers and Exclusive Pics From Your Favorite Shows

He adds: “I find it means a lot to some of our viewers, that song. I guess it’s, in some cases, the song that a lot of women would like to hear guys sing.” He laughs. “It’s basically a ‘I know, I get it now, I finally get it’ [song], and who doesn’t want to hear that?”

What Rayna-Deacon fans may not want to hear is that the end of the season finds Mr. Claybourne in serious danger of not getting a donor liver in time to save his life. In advance of tonight’s episode (10/9c), read on to hear Esten’s prognosis on his character’s future.

TVLINE | Deacon’s not doing so well. How are his spirits in these last couple of episodes, given that he’s had his hopes dashed at least once?
Well, besides being great drama for our show, the unfortunate aspect of that is that it’s real life for people on that list. It’s not just like you order up a liver, and you know, it’s here. There’s not an app for that kind of thing… I’m glad that we’re showing the ups and downs of it and the hardness of it.

TVLINE | Some of our readers are clamoring to see Deacon officially move into Rayna’s house. Will they get their wish?
I don’t believe that there’s ever like a scene of that. I think it became like a gradual thing, and when it happens it’s — boy, you thought it was interesting combining Avery and Juliette’s lives, because their sensibilities are very different? There’s a lot of that with Deacon, too. He hasn’t sold the house yet, but he’s definitely in there where he should be with Rayna. So no, we haven’t seen some of those moving scenes… We have a scene in Rayna’s in-house recording studio there in her house, and you can see Deacon’s guitars all around the room. So, yeah, it’s happening gradually.

TVLINE | Any hint on whether Deacon will have another potential donor by the end of the season?
That is definitely what we’re looking for, to see who’s going to be able to step up, be a match and save his life.

TVLINE | How much of Deacon’s decision to get back together with Rayna, do you think, was driven by the fact that he may not have much time left?
The point you’re making is there wasn’t time to waste is well taken, but I also think that even without [being sick], he would have jumped right back into that relationship. He was begging her. You know, he said, “Marry me, not him. Marry me,” and then I understood why the writers had it that he would want to protect her [by not telling her]. It’s like, “No, not now. Why now?” Having said that, first of all, the way Connie [Britton] delivered those lines, it was convincing. [Laughs] She was right, is what he realized. The line that moved me the most was, “You can’t protect us from this.” …It actually got me in that moment, when she said that… I think the reason he comes around is she’s right, again and again.

TVLINE | Chip Esten: Saying things ladies like to hear since way back when.
[Laughs] I run into that in my own house! [Laughs]