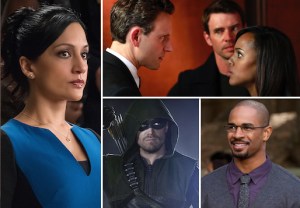 Since here on the East Coast we’re still waiting for the last of our snow mounds to melt, you can be forgiven for doubting that spring has actually sprung. But let your friends at TVLine assure you: Not only have the seasons changed but May is right around the corner. How can we be so certain? Because — ta-da! — it’s time for our annual May Sweeps Scorecard!

Same as ever, the teaserpalooza is jam-packed with intel about who’ll be getting laid to rest (or just laid) and saying “I do” (or hearing “You’re fired”) during Sweeps and all the way through the season’s finales. Also as usual, we’ve slapped [SPOILER] tags on the surprises that we’re not allowed to disclose (but that you are more than welcome to guess).

Wait, wait. Not so fast. Before you dive in:
• Keep in mind that most of the entries pertain to series regulars or recurring characters on shows that air on a broadcast network (i.e. ABC, CBS, Fox, NBC, The CW).
• Also keep in mind that, as the plots twist and information leaks, we’ll be updating the Scorecard (and re-updating it… and RE-re-updating it) until at last all the blanks are filled in and/or overwritten with NEW items. In other words, bookmark this page now. You can thank us later.
• Lastly, keep in mind that, if it’s on the Scorecard, it occurs during May Sweeps, which this year begins April 23 and ends May 20.

OK, now you can start reading. What? You already had? Is it any wonder why we love you people?

Number of weddings: 8
1. AIRED April 23: Louis Condé and Queen Elizabeth/Reign
2. AIRED April 28: Lizzy and Prudence/One Big Happy
3. AIRED May 6: Oliver and Nyssa/Arrow
4. AIRED May 10: Jack and Amanda/Revenge
5. AIRED May 11: Rogelio and Xo/Jane the Virgin
6. AIRED May 14: Richard and Catherine/Grey’s Anatomy
7. AIRED May 18: Sophie and Oleg/2 Broke Girls
8. AIRED May 19: Ronnie and Caitlin/The Flash

* if by “death” you mean “erasure from existence”

PROCEED TO NEXT PAGE FOR LIST OF BREAKUPS, RESURRECTIONS & MORE!