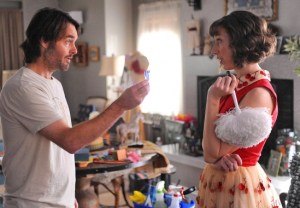 The following story contains spoilers from Sunday’s Last Man on Earth finale. Proceed at your own risk.

Fox’s Last Man on Earth ended its first season by solving one of the rookie comedy’s biggest mysteries: The photographic cameo that Jason Sudekis made in the premiere wasn’t a silly throwaway — it was shrewd foreshadowing. In the final seconds of Sunday’s finale, Sudekis was not only confirmed to be the brother of Will Forte’s Phil/Tandy Miller, he was revealed to be stranded in outer freakin’ space.

Below, Forte talks to TVLine about recruiting his SNL buddy for the top-secret role, previews Sudekis’ Season 2 involvement, and weighs in on the sitcom’s other big cliffhanger: Are Phil/Tandy and Carol headed for genuine coupledom?

TVLINE | When you embedded that family photo in the pilot, did you know the season would end with Jason in outer space?
No. We had no idea. It wasn’t until the fifth episode that we wrote that up and we all loved it. And the thought at first was, “Oh, brother’s up there in space, and every episode or two, you’d check in on him.” And then the story started going in different directions and it made more sense to do this. We just all agreed this would be a cool way to end the first season, hoping — fingers-crossed — that we got a second season.

TVLINE | You’ve got a second season, so where do you go from here?
We have plans, but there’s so many things that we need to figure out, so many different ways that we can go, which excites us. But it’s also scary because sometimes you have too much open road [Laughs]. I’m looking forward to getting a little rest for about a month and then we’ll get back in there and be recharged and start figuring out what to do.

TVLINE | How much of Jason will we see in Season 2?
I don’t know. He’s a busy many. We have talked about stuff before and we’ll probably have another conversation, but I would not expect him to be in every episode of Last Man on Earth. [Laughs] He’s a good friend, he’s good friends with a lot of people who work at the show, so I think he had fun coming in. We also don’t want to take advantage of that friendship. We have an idea and we’ve talked a little bit about it.

TVLINE | Was it hard keeping his role in the finale a secret?
The trickier thing, actually, was keeping Kristen Schaal’s arrival [as Carol at the end of the premiere] a secret. That was always a a [worry], “Would people watch the show if they thought it was just me around?” That was very nerve-wrecking in the beginning just wanting to do the right thing, finding that right balance of teasing people and also [accurately promoting the show]. But then there were a lot of people that were like, “If you blow that reveal, it might ultimately help you with viewers, getting more people in.” Ultimately, we kept it a secret.

TVLINE | Is Jason’s character aware of what’s going on on Earth?
My take is that he knows what’s going on as far as the virus, but he’s still holding out hope that somebody’s down there.

TVLINE | The season ended on a hopeful note for Carol and Phil/Tandy…
There are many different ways to go with that. The thing that I know is going to happen, which I’m excited about, is [they will both remain] very different people. Just because they’re together again and [Phil/Tandy] has a new attitude doesn’t mean they’re not going to disagree all the time and she’s not going to say crazy things and he’s not going to be a dip-sh–t. (With reporting by Vlada Gelman)