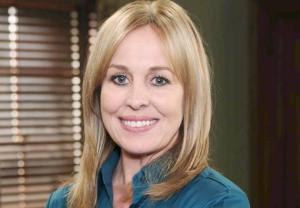 Strip away the fit-for-royalty wedding… and the kidnappings… and the catatonia… and General Hospital‘s Luke and Laura are basically just your average, run-of-the-mill former couple forever united in their love for their kids.

After all, it’s not their fault they once had to subvert a catastrophic weather event by gaining control of a giant gemstone, is it?

“The relationship has always been realistic,” Genie Francis tells TVLine, chuckling, “and the circumstances have always been absurd.”

RELATED  General Hospital‘s Anthony Geary to Exit: ‘I Don’t Want to Die on the GH Set’

The fan favorite’s recent return to the ABC soap, which began earlier this month as part of Anthony Geary’s/Luke’s farewell arc, centers on a similarly outlandish premise: Though outwardly appearing to reunite with her ex-husband, Laura actually is in Port Charles to recruit him for a rescue mission to save their missing son, Lucky, from peril.

On the heels of the drama announcing that Francis will stick around past after Geary’s last episode, we chatted with the Daytime Emmy winner for the scoop on her latest stint of love mutual respect and affection in the afternoon.

TVLINE | What will the race to save Lucky will look like?
It’s going to be another Luke-and-Laura adventure. There will be many fan favorites that we’ll touch on. I think it’s going to be a really nice bookend piece for the fans… I think it’s a crowd-pleaser. Other than that, I can’t give away any stories.

TVLINE | We know that Jonathan Jackson (who played Lucky) and Nathan Parsons (who played Luke’s son, Ethan) are coming back. Have you shot scenes with either of them yet?
Yes. With both of them. I didn’t get to do too much with Nathan. We’re in the same scenes, but I didn’t get really a one-on-one scene with him. But the Lucky moments are so, so nice. There are some amazing, not-to-be-missed scenes with Jonathan Jackson and with Tony. You can’t miss them.

TVLINE | What’s the overall feeling of those scenes?
Oh my god, there’s some good stuff there. And the feeling when Jonathan came back on the set was, everyone was so happy. It was like he came home. They all rushed to embrace him, and then we were all so happy, we embraced each other! [Laughs] It was really an amazing moment. The crew, the directors. It was just an amazing moment.

TVLINE | Have you watched Jonathan on Nashville?
Oh yeah, definitely.

TVLINE | Emma Samms is also back this summer. Do Laura and Holly share scenes?
Yes, we do!

TVLINE | How does that play out? They’ve both been linked to Luke at various points in the show.
There’s some kind of closure that they have with each other. There’s some really great scenes about what hasn’t been spoken about. [Laughs] They were good scenes, I think the audience will like them. And I have to say: I adored working with Emma. She’s just great. As leading ladies go, she’s not competitive. She just sticks true to her character, and she’s very gracious and sharing. She doesn’t try to undermine the other leading lady. And that’s so hard to find. So many times, that kind of a scene can feel like a battle more than a scene, you know what I mean? And this is just so lovely. I adored her and I would work with her again in a heartbeat.

TVLINE | How did you find out about Anthony Geary’s decision to leave General Hospital?
The producers called me. I mean, I knew it had been talked about a little bit in the press here and there. I never knew when [it was going to happen]. I know he’s been talking about leaving for more than a couple of years now. But I didn’t really know when.

TVLINE | What was your first reaction?
I was like, “Really?” [Laughs] “Really really?” And they said yes. The next question I had to ask was, “Are you sure he wants me to be there?” Because he’s been very vocal about not wanting it to be Luke and Laura reuniting. My next question was, “Is this what Tony wants?” And they said, “Absolutely.”

TVLINE | You haven’t filmed his final episode yet, have you?
No, not yet.

TVLINE | Have you seen a script for that yet?
No, I haven’t. All I know is that next week, I’m doing six episodes in one week and that will be the final taping with him.

TVLINE | I imagine you’re having feelings about that.
Of course I am! Oh my god, this is the end of an era. It was a big thing and it was a huge part of my life, so yeah. I feel a little weepy at times. Oh yeah.