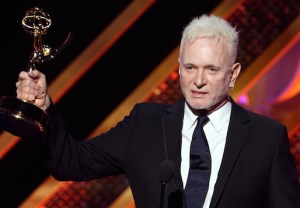 The next time General Hospital‘s Luke leaves town, it’s going to be for good. (No, really.)

GH vet Anthony Geary will exit the ABC soap for good when his current contract is up, he tells TVInsider.

“I’m just weary of the grind and have been for 20 years,” says the Emmy winner, who has won eight trophies for playing Luke Spenser since 1978. “I really don’t want to die, collapsing in a heap, on that GH set one day. That wouldn’t be too poetic.”

RELATED General Hospital to Go Live in May

Geary says he made the decision to leave in January.

“So that’s why the series is bringing back Genie Francis’ Laura,” who was Geary’s character’s romantic partner for many years, you say? Not necessarily.

“Genie and I agreed several years ago that the love of Luke and Laura had run its course,” he says. “They have children together and a very storied history, and there’s definitely still love there, but I think they’re toxic to each other at this point.”

Geary tells the site that once he’s done being Luke, he’ll reside in Amsterdam, where he’s spent much of his time over the past few years.

“There are still some surprises, the usual twists and turns and interesting guest stars coming up before Luke leaves town,” Geary promises.